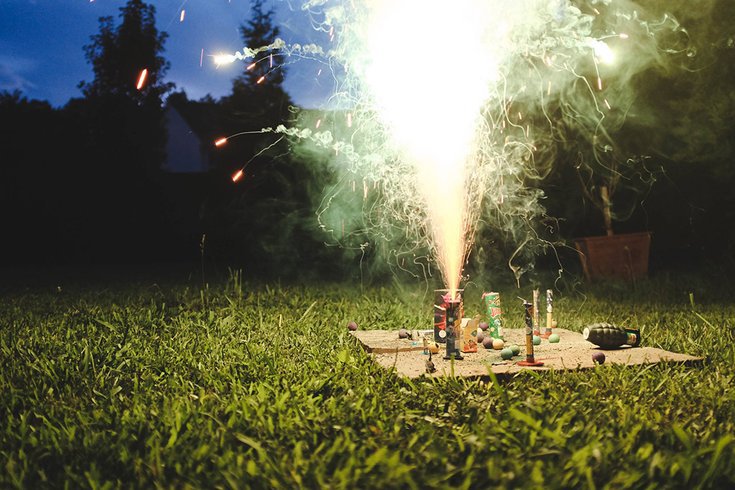 Two people have died in fireworks accidents in Pennsylvania during the month of June, including a 31-year-old man in Scranton on June 27, 2020. With consumer pyrotechnics sales at a record high in the U.S., officials are urging safety during the Fourth of July weekend.

A 31-year-old man died Saturday in Scranton after a commercial-grade firework exploded prematurely, marking a second fatal incident this month in Pennsylvania amid concerns about the Fourth of July weekend.

Police responded to the 2800 block of Cedar Avenue around 2 p.m. for a report of a fireworks accident. The Lackawanna County coroner said Corey Buckley died instantly from the blast, according to WBRE.

The incident came just weeks after another deadly fireworks incident in the Lehigh Valley. A shipping container full of fireworks ignited in a backyard in Lower Milford Township, setting off a chain reaction that killed 50-year-old Brian Ehret.

And in South Jersey on Sunday night, a man in Gloucester County suffered serious injuries to his hand when a mortar exploded.

For weeks, fireworks have seemed much more prevalent than in the past.

In Pennsylvania, where consumer aerial fireworks were legalized in 2017, explosions have become a daily and nightly occurrence. Many of the booms heard around the Philadelphia area are consumer fireworks.

The American Pyrotechnics Association last week urged safety as the holiday weekend approaches. The group noted that 2020 is on track to be a record-breaking year.

"The APA predicts an all-time high in backyard consumer fireworks sales and use as families prepare to celebrate Independence Day at home due to the pandemic and cancellation of large public celebrations," APA Executive Director Julie L. Heckman said.

Across the country, fireworks dealers have been reporting a surge in demand. Jack May, the owner of Lancaster-based Keystone Fireworks, told the Altoona Mirror that 2020 represents the perfect storm for fireworks use.

"The Fourth of July falling on a Saturday is the best day of the cycle for sales," May said. "People want to have their backyard patriotic celebrations. A lot of the large municipal displays have been canceled, so people are looking for an alternate way to celebrate the nation’s birthday."

Philadelphia officials said last week they have received numerous fireworks complaints from residents. Many say the explosions are disrupting sleep, creating anxiety in people and pets, and interfering with quality of life in the city.

Due to the coronavirus pandemic, Philadelphia has canceled its large-scale public fireworks events for the Fourth of July.

City Managing Director Brian Abernathy reminded residents of tragic incidents that severely injured a nine-year-old girl in Kensington last year and took off the finger of a 12-year-old boy in Summerdale. In both instances, the fireworks used were illegal devices.

"We understand the absence of in-person festivals may cause some to crave the excitement of an enormous fireworks display over the river," Abernathy said. "But the simple fact is that these are extremely dangerous products and the risks far outweigh the momentary excitement of the explosions.”

The city has several restrictions on fireworks use that remain in effect despite the 2017 change in Pennsylvania law:

• The Philadelphia fire code bans the use of consumer fireworks within 150 feet of occupied properties.

• The fire code also prohibits people from setting off fireworks on public or private land without permission of the owner.

• High-explosive fireworks known as Class M, such as M-80s, are illegal in the city and are incredibly dangerous.

• It’s also against the law to sell fireworks on the street without a license. Residents should call 911 if they see someone selling fireworks illegally on the street or in a tent.

• Never hold aerial or reloadable tube devices in your hand – they are safe when discharged from a hard, level surface but extremely dangerous when suspended in the air. There is no place for the energy to go but downward, which can cause severe injury.

• Never allow children to handle fireworks. Even sparklers can be unsafe when not used properly.

• Always have a sober, responsible adult in charge of all fireworks activities.

"While the number of fireworks-related injuries have declined significantly, this is not the time for consumers to be lax about safety," APA president Michael Collar said. "With anticipated record-breaking use this Fourth of July, especially by families who may be purchasing fireworks for their first backyard celebration, we want to emphasize the importance of reading the instructions for use and following common sense safety tips when using backyard fireworks as well as obeying local fireworks laws."