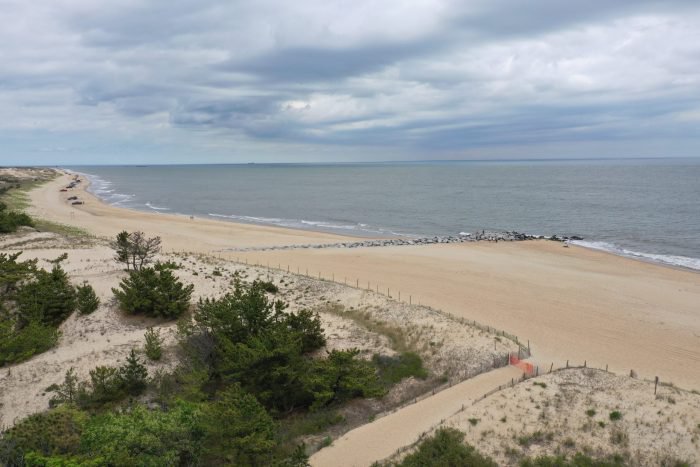 A man was seen capturing a shark with his bare hands at Delaware's Cape Henlopen State Park Beach in June 2020.

Most people wouldn't want their hands anywhere near a shark's mouth, but a swimmer in Delaware created waves last weekend when he was filmed corralling one at a beach.

In the video, the swimmer is seen dragging the shark near the shore as waves roll over him. He then holds the shark's mouth open for the camera and lets the animal go.

Fishing for sharks is heavily restricted in Delaware, though some shore-fishing of approved species is allowed. The state provides guidelines on which species can be fished and outlines those that are commonly misidentified.

A spokeswoman for the Delaware Department of Natural Resources and Environmental Control said Tuesday the department is reviewing the video.

"While shore-based shark fishing is allowed in Delaware, harassment of wildlife is not," the spokeswoman said. "Prohibited shark species must be immediately released and anglers should minimize handling them to increase their chances of survival."

The species of the shark seen in the video was not immediately clear.

The incident occurred just a few weeks after a 12-year-old boy who was surfing at Cape Henlopen State Park was hospitalized with a suspected shark bite. That incident occurred at Herring Point. It's not clear exactly where the second incident took place.

At the time of the boy's injury, Delaware officials shut down Herring Point and other beaches at Cape Henlopen State Park. There was no indication Tuesday that DNREC plans to enforce further beach closures.

The state's last recorded shark attack, also at Cape Henlopen State Park, was in 2014. Prior to that, only two others have occurred since 1960. One was at Mispillian Light in Delaware Bay in 1960 and the other was at Dewey Beach in 1980. All three prior incidents were non-fatal.