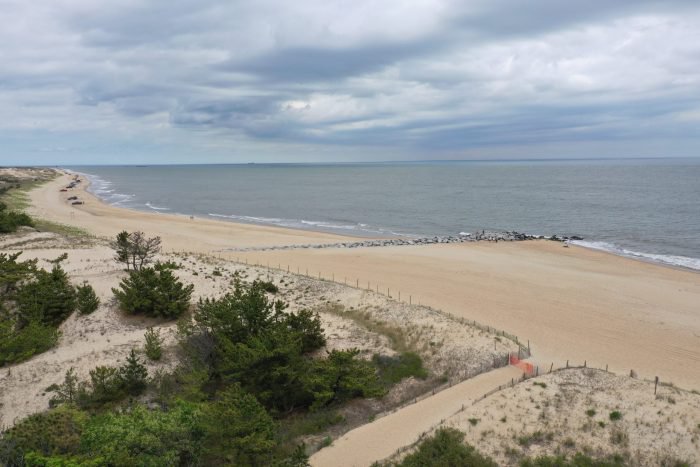 Delaware officials have shut down Herring Point and other beaches at Cape Henlopen State Park in Sussex County amid an investigation of a possible shark bite.

The state Department of Natural Resources and Environmental Control said a 12-year-boy who was surfing off Herring Point sustained puncture wounds to one of his legs around 1 p.m. The boy was transported by ambulance to Beebe Hospital in Lewes.

"While initially reported as a shark bite, the appearance of the bite mark is being reviewed by state and fisheries experts to determine if it was from a shark or potential other creature," officials said in a statement.

Beach goers are now restricted to knee-deep waters around the Cape Henlopen bathhouse, as well.

Shark bites are rare, and even rarer in Delaware. The last recorded shark attack, also at Cape Henlopen State Park, was in 2014. Prior to that, only two others have occurred since 1960. One was at Mispillian Light in Delaware Bay in 1960 and the other was at Dewey Beach in 1980. All three prior incidents were non-fatal.

For the most part, sharks show little interest in attacking humans without provocation, though some species may be more aggressive than others.

But geographic trends for attacks have changed over the last 50 years.

A 2015 study by researchers at Stanford University found a 91% drop in shark attacks along the California coast in the last six decades, but there appear to be more attacks occurring along the east coast of the United States.

The eastern seaboard of the U.S. and the southern coast of Australia have seen shark attacks double in the last 20 years, according to another study on trends released last year. A similar uptick has been observed around Hawaii.

Experts say that sharks tend to attack more often when they are surrounded by crowds of people. There's some evidence suggesting more of these attacks are occurring in areas where seal populations have made a recovery, which attracts sharks to these popular locations, according to the BBC.

“They generally just ignore people," Gavin Naylor, director of the Florida Program for Shark Research, told the BBC. "I think if people knew how frequently they were in water with sharks, they would probably be surprised.”