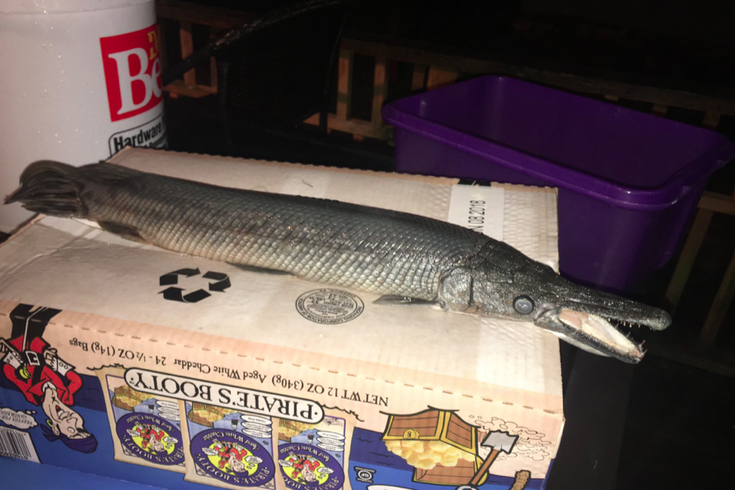 An alligator gar fish was found by a Radnor Township resident at Fenimore Park. The rare fish, which usually doesn't live this far north, will be preserved for educational purposes, according to the Pennsylvania Fish & Boat Commission.

One of the largest freshwater fish species in North America made a rare appearance this week at Fenimore Park in Delaware County.

The Radnor Township Police Department tweeted a jarring photo Wednesday of an alligator gar fish that was found dead at the park.

Radnor Township Animal Control was notified of a rare discovery in the pond at Fenimore Park this week. The Alligator Gar fish, commonly found in the Gulf of Mexico, was located by a township resident deceased. (1/2) pic.twitter.com/qjP7zOPEnY

According to the PA @fishandboat Commission, the fish could not sustain in such cold water. The rare find was turned over to them for preservation and educational purposes. (2/2) pic.twitter.com/FnDywUvTra

Alligator gar are most commonly found in the lower Mississippi River Valley and Gulf Coast states, and in Mexico as far south as Veracruz. Though they previously inhabited territories farther north, sightings of them in the Delaware Valley are considered very rare.

Despite their fearsome appearance, alligator gar don't pose any threat to humans. While they are considered ambush predators, they primarily feast on other fish and will sometimes attack small mammals and fowl.

The alligator gar found in Fenimore Park will be kept for preservation and educational purposes, according to the Pennsylvania Fish & Boat Commission.