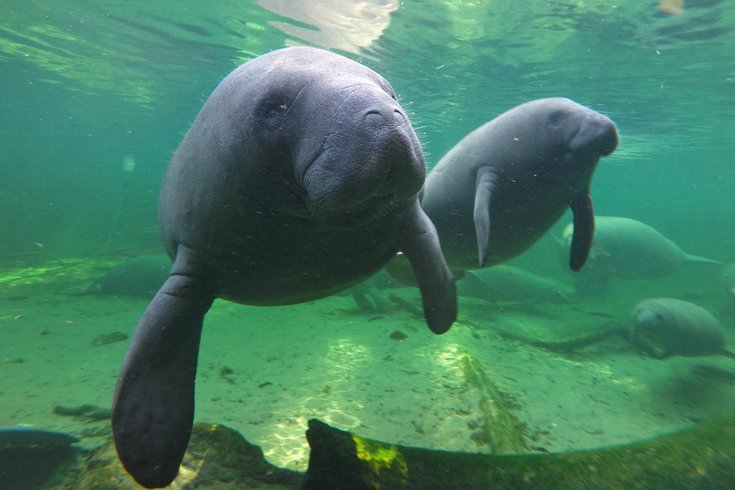 A dead manatee washed up from the Delaware Bay on Sunday in Middle Township, Cape May County. Manatees generally don't travel north of Florida during the winter months. The ones shown above were photographed in Blue Spring State Park in Florida in a 2015.

A dead manatee washed up Sunday along coastline of the Delaware Bay in Cape May County.

The 11-foot long, 900-pound male was discovered in Middle Township by officials from Brigantine's Marine Mammal Stranding Center, according to NBC10 Philadelphia. But they're still trying to figure out why the animal died and how it ended up so far north.

Officials speculated that the cold water temperatures and a lack of food probably contributed to the manatee's death. They added that it might have been dead for as long as a month.

"The animal was dead for some time when it washed ashore," Marine Mammal Stranding Center Director Bob Schoelkopf told the Press of Atlantic City. "It just got too cold for it."

Manatees generally do not travel north of Florida during the winter months, but they can migrate as far north as Massachusetts in the summer, according to the U.S. Fish and Wildlife Service.

Officials also believe that climate change may have impacted the manatee's death too.

"Generally with these guys, especially up in this area, if we find them deceased, it's somehow associated with the cold water," Jay Pagel, of the Marine Mammal Stranding Center, told NBC10. "It's quite possible this could be related to climate change."

Rutgers Cape Shore Laboratory is helping with the investigation. Members said that they were quite surprised to see the dead manatee washed up along the shore.

"Typically we just work with oysters and shellfish and we don't expect anything this large on the beach," Sam Ratcliff, a member of the Rutgers Cape Shore Laboratory, told NBC10. "It was a surprise kind of hearing it yesterday and then seeing it in person today."

Officials are collecting data and samples from the carcass and taking photos. This information will be sent to federal wildlife authorities to identify the manatee.