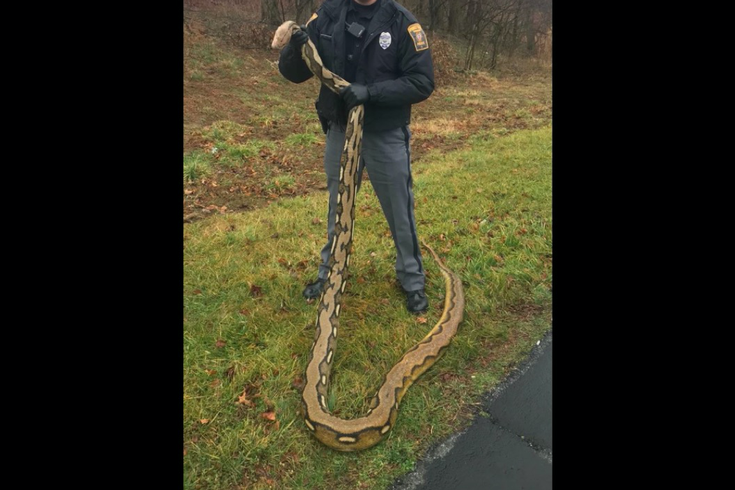 An enormous python was found dead in a wooded area in Springettsbury Township, York County. Local police aren't sure how the reptile, which isn't native to the area, wound up in the woods.

Authorities in a small town in York County are stumped by the discovery of a 15-foot python that turned up dead in a wooded area.

The Springettsbury Police Department shared a photo of the massive snake on Facebook on Thursday afternoon, calling it the strange call of the day.

"Officers were dispatched to the 1500 block of Whiteford Rd for the report of a large snake in a wooded area," police said. "Officers found a deceased 15 foot python. It is unknown where the snake came from or how long it had been there."

Pythons aren't native to Pennsylvania, but smaller breeds such as ball pythons are often kept as pets. They are non-venomous snakes that kill their prey by squeezing them.

Larger python breeds sometimes become too large for pet owners to handle, or can escape from homes on their own. The winter climate in Pennsylvania would likely have been too harsh for this python to withstand for any length of time.

Last fall, a massive reticulated python was discovered alive — with a full stomach — in Lancaster County. The snake was taken into the care of Forgotten Friend Reptile Sanctuary in Elm, Pennsylvania, whose Facebook posts about the reptile left the region awestruck.

Prospective pet owners who are considering bringing large reptiles into their homes are generally advised to think carefully about whether they will be able to care for these animals as they mature.