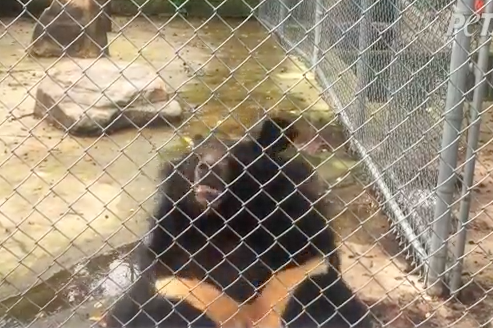 Dillon, an Asiatic black bear, was relocated to a sanctuary in Colorado after public pressure to remove him from a sportsmen's club in Western Pennsylvania, where he received inadequate veterinary care and became morbidly obese.

A morbidly obese Asiatic black bear who suffered for years at a sportsmen's club in western Pennsylvania has been safely relocated to a Colorado sanctuary after a successful public campaign to rescue him.

Dillon was kept in a small concrete and steel cage at the Union County Sportsmen's Club in Millmont, Pennsylvania, located about 165 miles northwest of Philadelphia. He was surrounded daily by the crackling of recreational gunfire and developed nervous rocking behavior that became evident to anyone who visited him.

While the club refused previous outside attempts to find Dillon a more suitable home, mounting public pressure this month convinced the group to hand Dillon over to qualified caretakers.

Though several hundred pounds overweight, Dillon was transported safely to the Wild Animal Sanctuary in Keenesburg, Colorado, where he's receiving medical attention for several issues, according to FOX31 in Colorado. Among them, he had been declawed and suffers from arthritis.

The sanctuary owners hope to rehabilitate Dillon and eventually place him in a 30-40 acre refuge in southern Colorado. He would live out the rest of his days with another rescued Asiatic black bear on 30-40 acres of land.

PETA, which celebrated Dillon's relocation, is still fighting for the release of a bobcat and several raccoons living in squalor at the sportsmen's club.