If someone in eastern Pennsylvania is missing a very large snake, we've found it 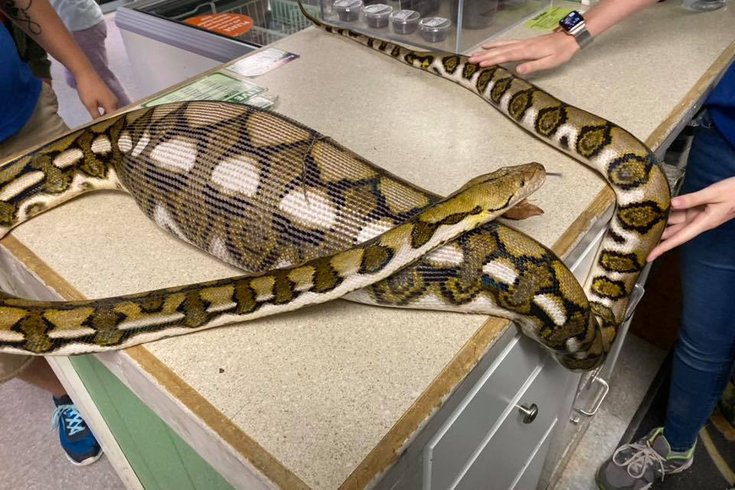 An extremely large reticulated python was found in Lancaster County, and now a local reptile sanctuary is figuring out what to do with the snake.

An extremely large reticulated python was found in Lancaster County on Friday, and now a local reptile sanctuary is figuring out what to do with the snake.

The python was picked up by the Forgotten Friend Reptile Sanctuary in unincorporated Elm, Pennsylvania, roughly 85 miles northwest of Philadelphia.

The sanctuary's owners said in a Facebook post that they're not exactly sure what the snake ate while it was hanging out in Lancaster County, but it seems to be well-fed.

Now the sanctuary is taking all the appropriate steps, which are... well, what exactly are the appropriate next steps when you find a gigantic foreign snake slithering around your neighborhood?

"We reached out to both exotic vets we work with, Animal Hospital of Dauphin County and New Holland Veterinary Hospital, and we are waiting to find out if their x-ray availability lines up with our busy schedule. We too are curious to learn more about this mystery. But our first priority is her health and welfare, as well as the health of the other 100 reptiles in our care. Right now she’s warming up in a safe enclosure, after being rescued from the cold, wind, and rain.

"There’s no pressing reason to drop what we’re doing for an emergency x-ray, but we may be able to schedule one over the next few days, if she doesn’t regurge first. I’d like to avoid her regurgitating if possible, and too much traveling and poking and probing can cause a big snake to lose its meal. And that would just be a waste of a good groundhog or raccoon or taco party box, or whatever is in there. If and when we do schedule an x-ray for educational purposes, your tax-deductible donations toward that expense are greatly appreciated, but our decision is based on her health and our schedule, not money. Thanks for everyone's concerns."

According to Reptiles Magazine, the reticulated python is the world's longest snake. It's not exactly a Pennsylvania native, though: the snakes are commonly found in Southeast and South Asia, in places like Indonesia, the Philippines, India, and Borneo.

Here's hoping the sanctuary finds this python's home, and no more cats (or raccoons, or whatever) are eaten.