These blue jellyfish are reportedly turning up at the Jersey Shore

Velella aren't typical for New Jersey beaches, but they've been spotted in Cape May County and points north 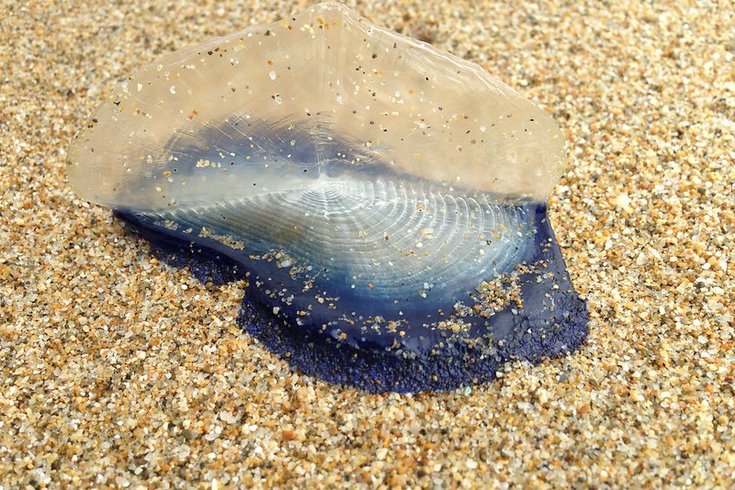 Velella is a jellyfish also known as the by-the-wind sailor. The sea creatures have been turning up at the at Jersey Shore, though they are not native to the region.

Beautiful blue velella jellyfish, also known as the by-the-wind sailor, have started to turn up on Jersey Shore beaches in recent weeks.

Scientists say that due to the Gulf Stream's powerful winds coming north due to Hurricane Dorian's September arrival, the sea-glass-like velella have traveled up to New Jersey's beaches riding the wind and the tides.

So far, they've been spotted on beaches in Cape May County, at the southern end of the Jersey Shore, and to the north in places like Avon-by-the-Sea and Sandy Hook, NJ.com reported.

On the New Jersey Jellyspotters Facebook group, photographers and beachgoers started to notice the bright blue jellyfish, which are typically found in warm, temperate, and tropical waters.

The velella usually float on the surface of the water searching for food and propelled by catching the wind with their rigid, triangular "sail." Once they wash up, the sea creatures die. They do not sting, however scientists say they carry a mild neurotoxin, so avoid touching your eyes or sensitive skin if you come into contact with one.

NJ.com reported that although the creatures are typically at sea, it's not necessarily unusual for velella to wash up in New Jersey. The jellies often to travel far distances and get pushed onto the sand by strong tides.

In 2015, millions of velella washed up along the West Coast in a mass stranding. They've also been seen in enormous quantities in Oregon and parts of Florida.

National Geographic reported that these mass strandings happen on shore about every three to six years.