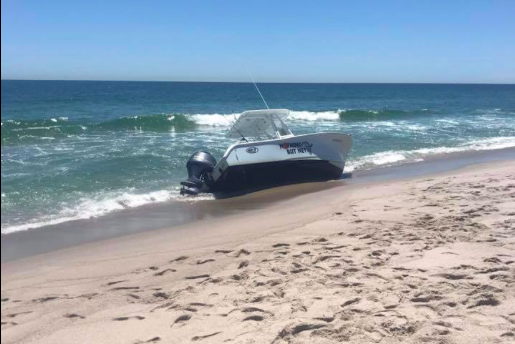 A 25-foot fishing boat was tipped over by a whale swimming just off the coast of Seaside Park, New Jersey, on Monday afternoon.

A small boat was struck and capsized by a while in Seaside Park on Monday afternoon, tossing its occupants from the vessel as the sea mammal swam off, according to a social media post by witnesses.

Friends of Seaside Park, in Ocean County, posted a photo on Facebook showing the boat after it had been brought back to the shore.

Happening now: a whale breached the surface and landed on a boat only a few dozen yards off D Street. The boat is now...

Posted by Friends of Seaside Park on Monday, June 8, 2020

"For those asking, both occupants are okay they were both thrown from the boat," the Facebook post said. "The whale kept swimming and breaching. From our view, the whale is totally fine. Appeared to be a humpback."

In an interview with the Asbury Park Press, Robert Schoelkopf of the Marine Mammal Stranding Center said the boat was about 25 feet long and was out for a fishing trip. The humpback whale was probably feeding at the time.

Those on the boat were fortunate that the incident occurred so close to shore, Schoelkopf said. The MMSC will attempt to test any DNA that may have wound up on the boat to confirm whether the whale was a humpback.

Last week, a humpback whale was spotted off the coast of Manasquan Beach in Monmouth County, which is about 13 miles north of Seaside Park.

Posted by The Asbury Park Press on Wednesday, June 3, 2020

The MMSC, which rescues and rehabilitates stranded marine life, has been struggling financially because of the COVID-19 crisis. The organization has raised more than $28,000 to keep operating, and it continues to accept donations to help bridge the gap in its usual fundraising efforts.