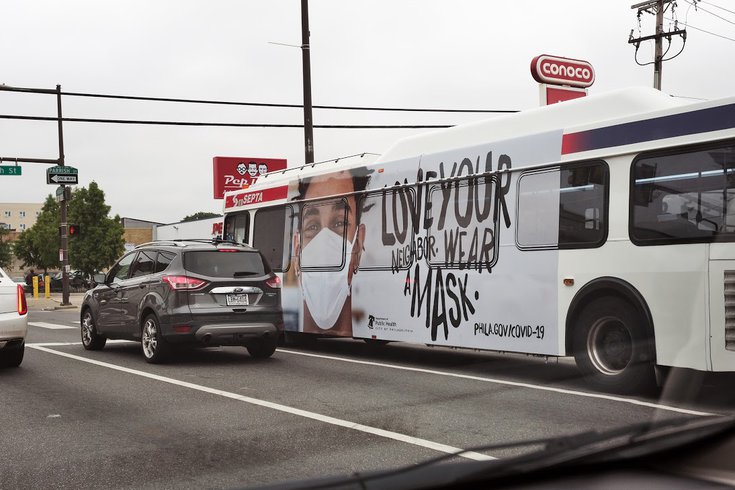 A SEPTA bus contains a message urging Philadelphia residents to protect themselves and their neighbors from COVID-19. The city's mandatory mask order requires masks to be worn in public indoor and outdoor settings, but officials hope residents will rally together behind the medical guidance.

As Philadelphia officials look to stave off the surge in coronavirus cases being seen across the region and country, the city is turning to a media campaign to underscore the importance of wearing a face mask.

While Philadelphia and Pennsylvania already have issued a mandatory mask order for indoor and outdoor public places, city Health Commissioner Dr. Thomas Farley said there needs to be stronger compliance among residents.

"What matters most with masks is consistency — everyone, every time they are in public should wear a mask," Farley said. "Already, most Philadelphia residents are wearing masks most of the time, but to avoid a second epidemic wave, we need to make wearing masks the new normal. This campaign will show people exactly what to do and remind Philadelphians why to do it – because we care about each other and because we are tougher than the virus."

Messages promoting mask use will begin to appear on SEPTA buses, mobile billboards, social media, print newspapers, radio spots and posters and flyers. The messages will be addressed to people of all backgrounds.

The campaign will prominently feature two messages: "Love your neighbor. Wear a mask." and "Philly never backs down. Mask up." 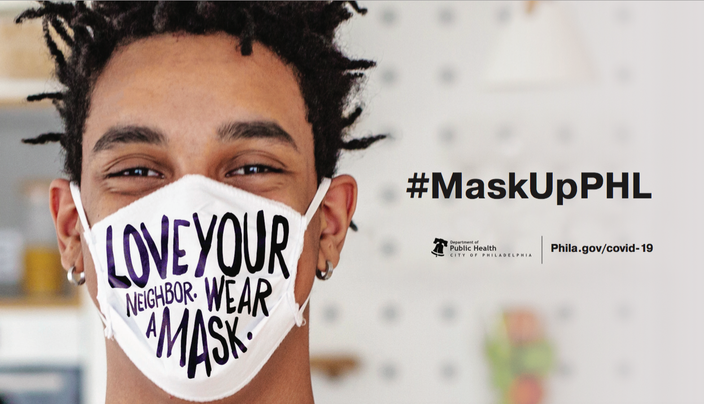 Source/Philadelphia Department of Public Health
As a reminder, the mandatory mask orders require that coverings be worn in any indoor public space, as well as outdoors, if there is less than 6 feet between people who don't already live together.

Farley said that city health inspectors have continued to monitor mask wearing in recent weeks, finding that about 55% of people were wearing them at indoor SEPTA stations and over 70% wore them when exiting retail stores. The media campaign aims to unite the city around the medical guidance that masks are our best bet to keep COVID-19 at bay and safely lift additional restrictions.

Over the past week, Philadelphia has been averaging about 115 cases per day, with between 5-6% of test results coming back positive. Those metrics, which are used to evaluate the city's position on social and economic restrictions, have risen modestly but have not increased sharply in the way other areas of have seen.

Philadelphia will remain in a "modified restricted green phase" of Pennsylvania's reopening process until at least Aug. 1.

Indoor dining and gyms, among other activities associated with higher COVID-19 transmission, will remain closed for the time being.

Farley noted that even outdoor dining has presented concerns and challenges since it began. Two restaurants have been shut down for non-compliance with guidelines, while a dispute over mask wearing at Old City's Infusion Lounge resulted in a tense moment in which a man pulled a gun.

"I'm trying to allow the restaurants to gain an economic footing, but at the same time we have to try to enforce safety," Farley said.

Residents who see restaurants not following proper guidelines for outdoor dining are advised to call 311, which will coordinate with city inspectors to check in on compliance with guidelines. Restaurants may be warned or shut down as deemed necessary.

Philadelphia also launched a Workers Relief Fund on Thursday to provide cash assistance to workers and families impacted by COVID-19 who were left out of all federal and state relief. The goal is to raise $3 million in order to provide a one-time direct cash payment to more than 3,500 families. Thus far, over $1.7 million in philanthropic commitments have been made.

"Immigrants and undocumented workers have been on the front lines, and keeping our communities moving. Yet, they have been left out of federal relief packages," said Patrick Garspard, preisdent of Open Society Foundations, which provided an initial $750,000 in funding. "Mayor Kenney recognizes their contribution to his city, and we commend him for his steadfast support for these essential workers during this difficult time."