Philly delays green phase of COVID-19 reopening until Aug. 1, at the earliest 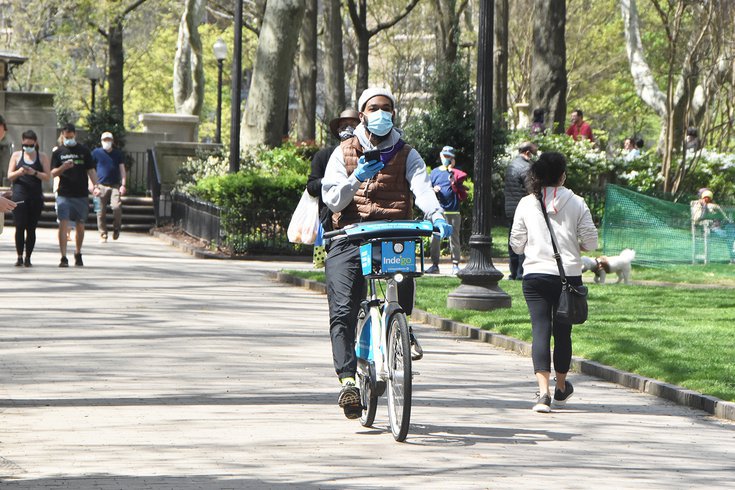 Plans for Philadelphia to enter the green phase of Pennsylvania's COVID-19 reopening process have been delayed until August 1 at a minimum, Health Commissioner Dr. Thomas Farley said.

Philadelphia has delayed entering the green phase of Pennsylvania's COVID-19 reopening process until Aug 1. The city had targeted to begin the green phase on Friday but is scrapping that plan which would have further eased business and social restrictions in the city.

Health Commissioner Dr. Thomas Farley said Tuesday that key metrics for the coronavirus indicate that a move to the green phase would be premature.

"Unfortunately, the targets we laid out to go to green will not be met by this Friday," Farley said.

Of the new COVID-19 cases, the largest increase of patients in Philadelphia has been among residents under 30 years old, who account for 34% of the city's new cases during the past two weeks. Prior to this period, people younger than 30 represent just 20% of diagnoses in Philadelphia.

Through contact tracing efforts, many of these younger patients have been linked to visits to the Jersey Shore, social gatherings and other high-risk settings, Farley said.

Earlier this month, city officials pegged July 3 as a target date for the green phase and issued a series of guidelines covering how Philadelphia could safely reopen. At the same time, Farley warned that if momentum were to swing in the wrong direction, Philadelphia would exercise caution.

Last week, amid record case numbers recorded in Sunbelt states, Farley said Philadelphia appeared to be entering a "second wave" of infections. While the increase in cases has been modest and  both fatalities and hospitalizations have dropped significantly, officials said Tuesday that pausing plans to reopen is the best course.

"We feel like this is the right decision at this point, but it's something we're going to have to evaluate going forward," Farley said.

The health commissioner acknowledged that the choice was a tough call.

As of this Friday, Philadelphia will enter a "modified restricted green phase," with allowances for outdoor activities or where masks can be worn and reinforced.

The businesses that reopened on June 26 — barbershops, salons and residential and private swimming pools — will continue to remain open. Outdoor dining, which is considered a lower risk for viral transmission, will continue under the currently established guidelines.

Indoor dining at restaurants will not be permitted until the city is able to reevaluate progress. Gyms and fitness centers also will remain closed.

"We think it's better to be cautious now than — like Texas and Florida — open up restaurants and regret it later," Farley said.

Philadelphia reported an additional 142 cases of COVID-19 on Tuesday, bringing the city's total to 26,133. Over a seven-day period, Philadelphia is averaging about 100 cases, which is above the benchmark of 80 that the city had set to enter the green phase, along with other key metrics included in the chart below. 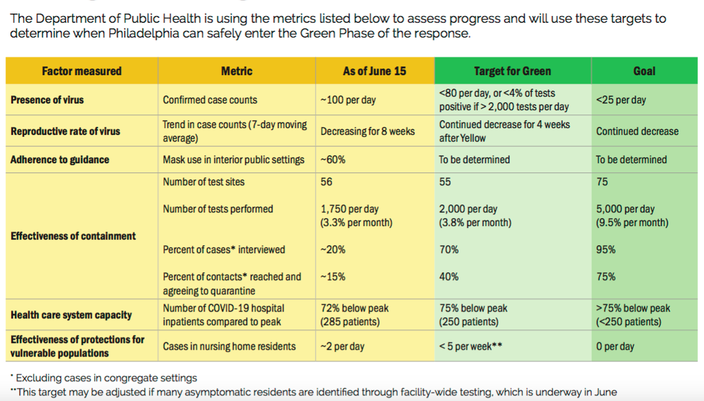 Source/City of Philadelphia
The announcement comes as neighboring New Jersey quashed plans on Monday to reopen indoor dining. Gov. Phil Murphy cited the large number of people seen without face masks and not practicing social distancing at Jersey Shore bars and restaurants among his reasons.


In Allegheny County, Pittsburgh shut down bars and alcohol sales in restaurants amid a spike in COVID-19 cases after the county moved to the green phase on June 5.

Farley has maintained that Philadelphia must see strong compliance with the city's mandatory mask order, instituted last week, if residents hope to resume more activities and see them remain open. A media campaign urging residents to wear masks is expected to begin in the near future.

At least 16 states have rolled back plans for reopening as coronavirus infections surged past 2.5 million this week and the national death toll climbed above 126,000.

Philadelphia will continue to take a cautious approach, which may mean dialing back further if necessary.

"If cases rise here in Philadelphia, it is possible that we will have to backtrack and close activities that we are currently allowing, or that we are starting to allow reopening as of Friday," Farley said.

City residents are advised to avoid visiting areas that are experiencing spikes in cases. Those who come to the city from these high-incidence areas are asked to self-quarantine for 14 days, whenever possible.

Experts at the U.S. Centers for Disease Control & Prevention said Monday the country now has "way too much virus" to follow the model of nations such as New Zealand and South Korea, which have effectively beaten back the virus enough to safely reopen their economies.

“This is really the beginning,” said Dr. Anne Schuchat, principal deputy director of the CDC. “I think there was a lot of wishful thinking around the country that, hey it’s summer. Everything’s going to be fine. We’re over this and we are not even beginning to be over this. There are a lot of worrisome factors about the last week or so.”

Farley explained that residents must take a broader view of the coronavirus pandemic.

"If we can't eliminate this virus, we have to do everything we can to protect the people who are most likely to have a severe case," Farley said.

Check back for updates on this story.