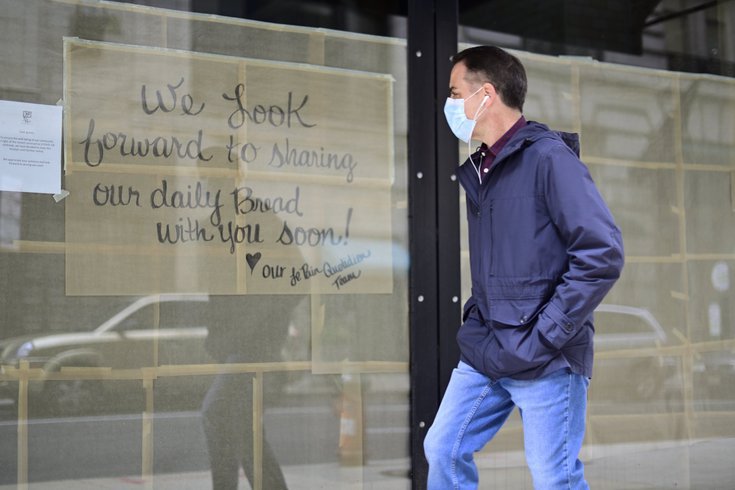 Philadelphia is seeing a rising in coronavirus infections among teenagers and young adults attending social gatherings. The city's new mask order aims to halt a second wave of COVID-19 that threatens to delay the green phase of reopening.

As coronavirus infections spike in large parts of the United States, Philadelphia Health Commissioner Dr. Thomas Farley said the city is beginning to see a "second wave" of COVID-19.

Plans to enter the green phase of Pennsylvania's reopening process on July 3 are now in jeopardy of being delayed.

"We will reconsider green phase activities that were tentatively scheduled to restart next week in view of the risk," Farley said. "We may need to pause on restarting those activities, especially those that are both indoors and where mask use is not practical — such as indoor dining and restaurants."

A mandatory mask order is now in effect in the city in all indoor public places and outdoors, if people are less than 6 feet away from individuals from other households. Limited exceptions, such as for children under 8 years old, are allowed.

The written order will not be enforced by police, but Farley said it underscores the importance of wearing a face mask. Experience has taught the city that written legal requirements can influence how people behave, even if there is no government enforcement.

"The purpose of this order is really to send a message to everyone, to enable them to encourage others to wear masks," Farley said. "In the end, it's up to us as Philadelphia residents to self-enforce this order. If it works, we'll be able to reduce the spread of the infection. If it doesn't, we'll have more cases. It's as simple as that."

During Friday's coronavirus briefing, Farley said Philadelphia is showing an uptick in some key metrics that are used to determine the city's progress and readiness to reopen.

Among the more concerning trends is an increase in cases among young people attending social gatherings, a problem observed across the country.

"The increase may be occurring in a variety of populations, but we have noticed a spike in cases among teenagers ages 16 to 19 that appear to be from them attending social events," Farley said. "That's something which has been seen nationally with this infection in younger adults and teenagers."

The rise in cases in young people comes even as some high-risk group settings, such as nursing homes and prisons, continue to see cases fall.

But as the U.S. marks its worst overall day in terms of new COVID-19 cases, with new highs in many states and hospitals under strain, Philadelphia is at risk of setbacks.

To enter the green phase, the city previously had set a target of about 80 cases per day and a rate of positive tests less than 4%. The numbers appear to be headed in the opposite direction, hovering at about 100 cases per day and 5-6% of tests coming back positive, an increase from as recently as 10 days ago.

The health commissioner said the increased rate of positive tests shows that the increase in COVID-19 cases is not due to more testing.

In the city, officials have decided to move forward with allowing barbershops, beauty and nail salons, and residential and private swimming pools to reopen Friday as well.

Farley insisted that the key to stopping the spread of the infection is compliance with the face mask requirement.

Head counts conducted by health department inspectors in June found that about 55% of Philadelphia residents were wearing masks at SEPTA stations, while about 78% wore them as they exited retail stores.

"That's good, but it needs to be better," Farley said. "We need to have a higher percentage of people wearing masks."

In addition to the mask order, the city will be launching a media campaign in July and will send flyers to businesses to ensure that employees and customers are in compliance.

Philadelphia reported 143 new confirmed cases of COVID-19 on Friday, bringing the city's total to 25,693. With no additional fatalities, Philadelphia's death toll stands at 1,579.

The health commissioner said earlier this week that Philadelphia may be hitting a plateau in its rate of decline of COVID-19 cases. He now believes there's evidence case numbers are growing again.

"I would say they are rising," Farley said. "They don't appear to be rising fast, but they are increasing."

Although the change is modest, Farley said it is especially concerning in light of trends around the country in places that have eased restrictions.

Officials strongly advise residents — especially younger residents — to avoid social gatherings where they are likely to be without masks.

Those who visit Philadelphia from high-risk areas identified by the city are asked to self-quarantine for 14 days upon arrival into the city, whenever possible.

Officials will be monitoring the epidemic over the weekend and discussing plans with businesses and organizations impacted by a potential delay in entering the green phase.

Given the reopening of the counties around Philadelphia, Farley said it is imperative for city residents and businesses to follow guidelines.

"I am worried. It is my job to be worried," Farley said. "I am worried in general about reopening without people wearing masks. I understand the difficulties of the shutdown. I understand why people want to reopen, and I think that there are things that we could reopen safely if we are really vigilant about the mask use."