Plus, how much did the Eagles improve this offseason and what are the biggest unanswered questions heading into camp... 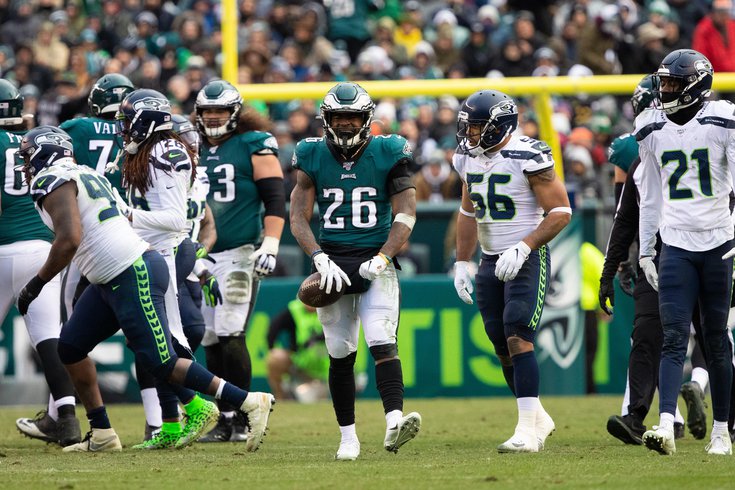 With Eagles rookies already having reported to the NovaCare Complex ahead of the official start of training camp next week, football coverage is really picking up and we have a lot more items than usual in today's edition of What They're Saying. Because of that, we'll skip over the long intro and just jump right into it...

Sanders is the future

We start today with the running back position, one that's received a lot of coverage in the second half of this offseason with the Eagles still in the market for a backup to second-year back Miles Sanders, who burst onto the scene after Jordan Howard went down in the middle of last season. The Eagles' second-round pick from a year ago led all NFL rookies in yards from scrimmage last year and could be in line for a breakout season, even if he doesn't reach the self-proclaimed MVP status he predicted earlier this summer.

Over at The Athletic, as part of their "Future of the NFL" series, they took a team-by-team look at which player on each roster is most likely to be a future star. And it's no surprising that player selected from the Eagles is last year's Rookie of the Year candidate, Sanders.

Sanders shared the Eagles’ backfield for the first half of his rookie season. By the time he became the unquestioned top running back in November, he produced like one of the NFL’s best all-purpose backs. He was one of only six running backs with at least 650 yards from scrimmage and four touchdowns from Week 11 through Week 17. Sanders became the seventh rookie to top 800 rushing yards (818) and 500 receiving yards (509). Entering his second season, the Eagles’ 2019 second-round pick is poised for a breakout season. Forget about the committee backfield that coach Doug Pederson has used in his first four seasons; Sanders is the featured running back and will be used in a way like no player on the Eagles since LeSean McCoy was traded in 2015. Sanders broke McCoy’s franchise record for most rushing yards by a rookie. Can he top McCoy’s Year 2, when McCoy rushed for 1,080 yards and caught 78 passes? It’s not out of the question, especially because the Eagles plan to feature Sanders in the passing game. — Zach Berman  [theathletic.com]

Sanders may soon be 'elite'

Speaking of Sanders, The Ringer had the Penn State product 14th overall (RB10) in their recently released fantasy football draft rankings, well above any other member of the Eagles.

The one question mark around Sanders isn't even about him, but rather about who will be the Birds RB2 as the team reportedly remains in the market for a veteran back to slot in behind the youngster (Devonta Freeman, anyone?), both as an insurance policy and a potential change-of-pace back that could spell Sanders at times this season and keep him fresh down the stretch.

Bottom line: Next in line to join the elite tier of fantasy RBs.

Upside: Sanders played a complimentary role to Jordan Howard in the first half of his rookie season, but from Weeks 10 through 16—a stretch in which Howard missed time with an injury—the rookie put up RB1 numbers, rankings as the RB10 in half-PPR formats. He finished the year as the new owner of Eagles rookie records for rushing yards (818) and yards from scrimmage (1,327) while leading all rookies in the latter category. His performance down the stretch pretends what could be a Year 2 jump into the elite echelon of the position.

Downside: The big worry for Sanders is whether the Eagles will give him the volume to leap into the top tier of fantasy running backs in 2020. Philadelphia's current coaching staff has favored a committee approach at the position—but they've also never had a back like Sanders.  [theringer.com]

Their presentation on these rankings is awesome, and it's a great way to help prepare for your fantasy football draft. I recommend checking it out.

Training camp, believe it or not, is right around the corner, and without any other offseason workout on which to judge the Eagles and their roster, there are going to be a lot more questions that need to be answered this August than in years past.

Over at Bleeding Green Nation, Brandon Gowton set out to try to answer some of these questions as part of SB Nation's series previewing each NFL team. Here's one of the questions that will certainly be followed closely by fans as camp rolls on...

Many believe Avonte Maddox and Sidney Jones will be battling it out for the No. 2 cornerback spot across from Slay but the feeling here is that’s less of a competition than people realize. Maddox is going to be the guy there. The bigger point of interest is … what happens at receiver? DeSean Jackson will be starting if he’s healthy and avoids further off-field trouble. It’s unclear who’ll be lining up with him. Doug Pederson publicly tempered expectations for Reagor by saying he’ll be learning Jackson’s role to start out. Alshon Jeffery seems bound to begin the season on PUP. JJ Arcega-Whiteside looked like a bust as a rookie; is he really ready to step up? Are the Eagles going to count on 2019 practice squad call up Greg Ward in the slot? How does Goodwin factor in? Can one of the Eagles’ Day 3 draft picks — John Hightower or Quez Watkins — emerge early on? There are more questions than answers at this position.  [bleedinggreennation.com]

One of the big changes for the Eagles this offseason came to the offensive coaching staff, as they parted ways with offensive coordinator Mike Groh and WR coach Carson Walch. Now, Press Taylor will take over as the passing game coordinator under Pederson (and newly hired assistant Rich Scangarello) after focusing solely on the quarterbacks the last few seasons. Will he be up to the challenge? That's one of 10 questions Mike Kaye set out to answer over at NJ.com...

1. How will Press Taylor handle his promotion to passing game coordinator?

While Taylor won’t replace former offensive coordinator Mike Groh in title, the 32-year-old wunderkind assistant coach will take on his predecessor’s play-design duties. The Eagles have been grooming Taylor for a bigger role for years, and while he will still maintain his status as the team’s quarterbacks coach, he will have a larger role in the weekly game-planning meetings this year as well.

The Eagles’ offense has failed to get off to hot starts since Frank Reich left to become the Indianapolis Colts’ head coach in 2018. Taylor will be tasked with putting quarterback Carson Wentz and the passing offense in position to push the ball down the field.  [nj.com]

While we're on the topic of Press Taylor, another aspect of the aforementioned "Future of the NFL" series from The Athletic was their 40 under 40 list, which focused on all aspects of the game (not counting the players), from coaches to front office execs to agents and beyond.

The Eagles were well represented on the list, with three staffers getting the nod, including Taylor.

Considered the brightest young mind on the Eagles’ coaching staff and notably given credit for discovering the “Philly Special,” Taylor originally joined the Eagles as a quality control coach for Chip Kelly in 2013. He stayed on when Doug Pederson took over and worked his way up from assistant quarterbacks coach to quarterbacks coach to passing game coordinator. He’s worked closely with Nick Foles and Carson Wentz and will now have a bigger role in installing the game plan. The Eagles view him as an offensive coordinator-in-waiting. If Press continues on his current trajectory, he could land a head-coaching job in the future, just like his brother, Zac, in Cincinnati.  [theathletic.com]

The others were Ian Cunningham (35), the Eagles assistant director of player personnel, and Alec Halaby (33), the Eagles VP of football operations and strategy.

For better or worse?

Over at ESPN, their NFL staff ranked all 32 NFL teams by how much each improved this offseason, and the Eagles probably didn't place as high as fans would hope, although one of their biggest losses (Brandon Brooks) was hardly their fault...

Not to be an interior-offensive-line nerd, but the loss of Brooks to injury could hurt the Eagles as much as or more than the loss of Frederick to retirement hurts the Cowboys. Jenkins will also be tough to replace on the back end of the defense. Reagor will have to be an instant contributor to an already underwhelming WR corps. And while Slay is surely an upgrade at cornerback, he's going to have to be pretty amazing to justify the contract the team gave him. Philly fans ... they notice these kinds of things. -- Graziano  [espn.com]

Linebacker has always been a position in which the Eagles don't heavily invest. So perhaps it shouldn't come as a surprise that their current crop of linebackers, after letting Nigel Bradham walk this offseason, isn't drawing rave reviews from Pro Football Focus.

That being said, they're young at the position and there is plenty of potential there, even if the team doesn't put a ton of resources into it...

There’s a new look to the Eagles' linebacking unit as they added speed this offseason and will have a few new faces competing for playing time.

Nathan Gerry returns after playing 669 snaps last season — including the playoffs — and posting a career-high 62.2 overall grade. Gerry hasn’t been as effective in coverage as you’d expect to see from a college safety, and tackling has also been an issue given that he's missed 17.8% of his attempts, ninth-worst in the league.

T.J. Edwards is the name to watch in this group as the former undrafted free agent has played well when called upon — he earned a 77.6 overall grade in the preseason and an 83.4 overall mark on 122 regular-season and postseason snaps. Edwards is below average athletically, and there may be some coverage limitations, but he’s been a productive player since his freshman year at Wisconsin.

Duke Riley came over from the Falcons last season to play 37 snaps, but he now has a 47.0 career grade across 688 snaps. Jatavis Brown is another new addition who did his best work as a rookie in 2016 when he graded at 77.6 overall. He’s slowly regressed since then, bottoming out with a 29.4 grade on just 94 snaps last season, but he’s an explosive blitzer who is worth a second look as a sub-package player.

The Eagles added more athleticism in the draft with Davion Taylor in the third round and Shaun Bradley in the sixth. Taylor is still developing as a player, but he has 4.39 speed and played a challenging role in Colorado’s defense. Bradley has man-coverage skills and can add value covering running backs out of the backfield.

The Eagles’ linebacking corps has plenty of question marks but also plenty of potential answers, and it’ll be worth watching how they deploy some of their new weapons.  [pff.com]