Eagles mailbag: What would your big board look like if the NFL re-drafted the entire league? 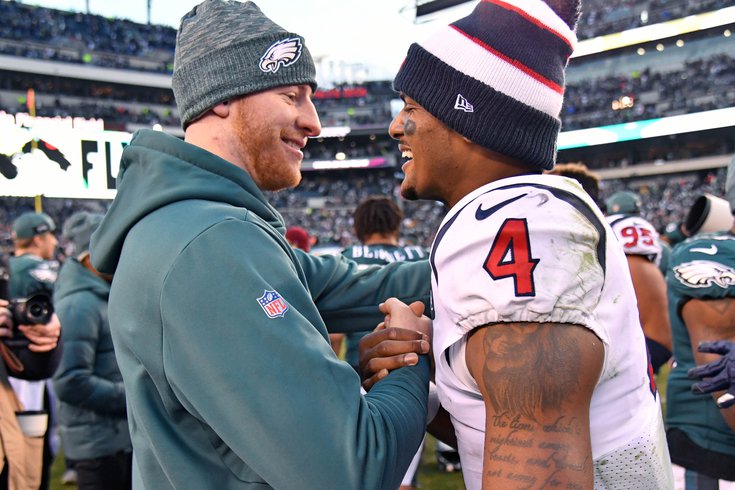 Who would go first, Carson Wentz or Deshaun Watson?

Question from nobody in particular: If you had to put together a big board for the re-drafting of all NFL players, what would that look like?

OK, so nobody asked me this question, ha, but ESPN's re-drafting of the league sparked some debate after there were some absolutely horrendous choices in their exercise.

Our NFL Nation team did a four-round draft to begin a roster to win a Super Bowl within five years: one QB, one offensive player, one defensive player and a Wild Card. Patrick Mahomes goes first: https://t.co/4kGxoNvtpL pic.twitter.com/mbP8debUd7

I'm sure Ronnie Stanley is a great LT and all, but sixth(!), over Carson Wentz and Aaron Rodgers? Why draft a LT if you're not going to have anyone worth protecting when you take whatever garbage quarterback is left in Round 2? Drew Brees the fifth quarterback gone when he may only play one more year? Freaking Drew Lock the 11th quarterback taken. Who drafted these guys?

Anyway, here is what my big board would look like if I were to prepare for such a draft, using ESPN's important caveat that you're trying to win a Super Bowl in the next five years. I guess after five years, a meteor crashes into Earth? Whatever. Let's just do this.

3) Lamar Jackson, QB, Ravens: I'd probably have Jackson a little lower if there were no "win within a five-year window" caveat as I would be concerned about Jackson's long-term staying power with the number of hits he's going to take. But if we're only talking five years, sure.

4) Carson Wentz, QB, Eagles: The disrespect for Wentz above is odd. 11th overall? GTFOH. I do believe that DeShaun Watson is worthy of this spot too, but Wentz should go no lower than fifth in a draft like this.

6) Aaron Rodgers, QB, Packers: Rodgers is no longer the best football player in the world, and probably not really even close anymore. Still, while he's in decline, he's still really good, and I'd guess that he'll still be a very good starter for at least the next three years, and maybe the full five?

7) Tom Brady, QB, Buccaneers: With the help of (and actually say the quotes out loud here), "alternative medicine," Brady thinks he'll play deep into his 40's, and perhaps he will. He's definitely in some level of decline, though it's worth noting that he had very little to work with on offense in 2019. At a minimum, I know I could trust him not to turn the ball over and easily read opposing defenses.

8) Dak Prescott, QB, Cowboys: If I'm drafting 8th, I'm praying that one of the teams in front of me takes something other than a quarterback.

9) Matthew Stafford, QB, Lions: I probably like Stafford more than most, and I get why many won't like him because the Lions have stunk for so long. But he's clearly talented, and can make throws that other quarterbacks around the league can't. With Stafford a year ago, Detroit was at least an average team. Without him, they had no chance of winning games. They were 0-8 without him, including 7 losses to teams that finished 8-8 or worse. I'd probably look to trade back here and land Stafford closer to the mid-way point of the first round.

10) Kyler Murray, QB, Cardinals: Overrated rookie season (there were better Offensive Rookie of the Year candidates), but still encouraging enough to take him this high.

11) Sam Darnold, QB, Jets: I'm of the opinion that Darnold is good, but fear this will be thrown back in my face at a later date.

13) Joe Burrow, QB, Bengals: I'll take my chances with the rookie over the guys below him.

14) Drew Brees, QB, Saints: How many years does he have left? Does the team I'm drafting for play in a dome? Or are we at least in a warm-weather city? That would be part of the consideration if I were to take Brees. If so, bump him up a bit. If I'm drafting for, say, Green Bay, pass. There are now also concerns over how effectively he can lead a locker room afer his "disrespectin' 'merica" comments.

15) Kirk Cousins, QB, Vikings: Like, I get he's a nerd, but how does Cousins not appear on the list above, at all, but guys like Drew Lock and Teddy Bridgewater go in the first 18 picks?

OK, so we're halfway through the first round, and... it's all quarterbacks? Well, yeah. The difference in the quarterback you can get here vs. what you'll get in Round 2 (Jameis Winston?) is greater in terms of WAR (wins above replacement), in my opinion, than the difference in the positional player you'll get here (like an Aaron Donald, for example) vs. what will be available in Round 2.

17) Daniel Jones, QB, Giants: He has major fumbling issues to fix, but if/when he does, there was enough to be encouraged by in his rookie season to believe he'll be a good starting quarterback for a long time.

18) Jared Goff, QB, Rams: He's gotten to the big game before behind a great supporting cast, though he looked overwhelmed when he was there.

21) Aaron Donald, DT, Rams: OK, finally I'll take an elite positional player over the rest of the quarterbacks in the league.

22) Ryan Tannehill, QB, Titans: His numbers in 2019 were kinda crazy. Almost -- but not quite -- Nick Foles 2013-ish. Maybe he's good now. I lean toward "one year wonder," but if you're picking this late in the first round of such a draft you're already screwed.

23) Philip Rivers, QB, Colts: I've always liked Philip Rivers. Unfortunately, he never really came close to winning anything, and his career is almost over. He can still play a little though.

24) Stephon Gilmore, CB, Patri*ts: He's by far the best cornerback in the NFL, in a league short on quality corners and heavy on receivers.

25) Tyreek Hill, WR, Chiefs: Julio Jones would be my top receiver if not for his age. Hill's unmatched speed opens everything up in KC's offense.

28) George Kittle, TE, 49ers: I wanted to leave him off because it's too trendy to have him on, but he is really, really good, and still very young.

29) Julio Jones, WR, Falcons: He's been so good for so long that he has almost become boring.

32) Nick Foles, QB, Bears: I'll put him in to pander to the sentimentalists.

Question from Joey Jo Jo: What do you make of Miles Sanders' MVP prediction? Unwise to put that kind of pressure on himself? Maybe a little too cocky?

We're going back a few weeks on that one, but I think it's fine. You don't want to be doing that if you're a quarterback, because there's a lot that's not in your control at that position, as we have seen a couple times already in Carson Wentz's career (having the worst set of receivers in the league twice in four years as a starter). For that to blow up in Sanders' face, he'd have to have a Trent Richardson-like season, and I don't see that.

I believe Sanders is a young kid who has his head on his shoulders. When he struggled early last season, he was self-aware about it, acknowledging his mistakes, and then fixing them as the season progressed. If he walked through the door on Day 1 thinking he was some stud like Freddie Mitchell, then sure, maybe that's a little concerning. But with Sanders, I think confidence is a good thing.

Question from Nuke: Do you see this spring for rookies as being similar to the years when the NFL used to restrict the number of spring practices of rookies whose schools had yet to graduate? And how do you think the Eagles did preparing those rookies for training camp?

Since 2016, players whose schools were on the quarters system (their school year lasted into mid-June) were forced to miss OTAs. That rule is now gone. Since 2016 (and we’ll use 2016 because it was the start of the Doug Pederson era, obviously), it has only affected three draft picks.

• Isaac Seumalo: Seumalo has acknowledged that it would have been preferable to be able to participate in OTAs, but he did wind up playing at four different positions in nine games as a rookie, and showed promise.

• Sidney Jones: Jones’ absence didn’t matter because he was recovering from a ruptured Achilles anyway.

• Elijah Qualls: The one guy that I think it may have hurt the most was Qualls. He came into training camp out of shape, and was on the receiving end of some really tough coaching from then defensive line coach Chris Wilson during training camp. If he participates in OTAs he gets a taste of some of that tough “welcome to the NFL” love sooner, maybe he is more prepared for training camp? That might be a stretch.

I do think the time off as a result of COVID will affect Jalen Hurts because he plays quarterback, but there isn’t so much going on at OTAs that I would use that as a baked-in excuse for positional players. Ultimately, if they can play, they’ll prove it, and if they can’t, well, they’re prove that too.

Question from Kevin Kinkead: Which Philadelphia media member has the best hair and which has the worst?

For best hair, the TV folks are just playing a different game than the rest of us. We writers just aren’t going to compete in that arena. I mean, did Anchorman teach us nothing?

So I would go with a tie between ABC’s Jeff Skversky and NBC’s John Clark in the male division, and FOX’s Kristen Rodgers in the female division.