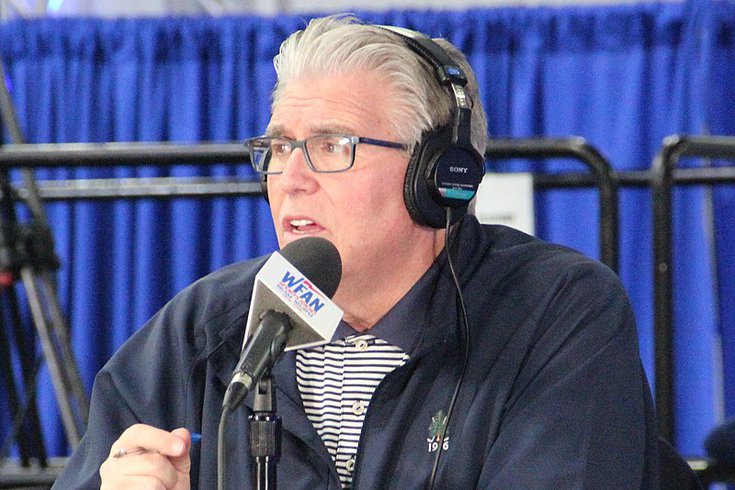 Mike Francesa was not interested in talking about Carson Wentz, Jalen Hurts and the Philadelphia Eagles when a call came in from a young man who said he hopes to some day be a sports radio host. WFAN is a New York City radio station.

To describe WFAN's Mike Francesa as a cranky man would be an immense understatement, but the veteran New York sports radio host reached another level of ruthlessness on Monday.

The victim was a young man in Houston who called into Francesa's show to discuss the Philadelphia Eagles' quarterback situation. The poor caller told Francesa he dreamed of one day hosting a sports radio show, and then proceeded to have that dream dumped off the line by Francesa.

The exchange was posted on Twitter by the same account that once accused Francesa of farting audibly during his show. (That tweet led to a New York Daily News article and an on-air denial from Francesa, who called the whole thing "fake news" and clickbait fodder, one of which is probably true).

This time around, it was just a guy named Max from Houston calling in to New York to talk about Philadelphia.

Mike Francesa rudely dismisses a young fan because his call about the Philadelphia Eagles is not interesting enough for Mike's New York audience. pic.twitter.com/rXI1ySuVsd

"I just thought I had a good take," Max said when shot down by Francesa.

"Well, thanks," Francesa said. "Listen, next time you call, give me something a little ... that my audience might give a darn about, alright? In the middle of this (pandemic) right now, say you're calling from Houston, and then giving me a take on something in Philadelphia."

The beginning of Max's take was that Carson Wentz should be grateful for the Eagles drafting Oklahoma quarterback Jalen Hurts in the second round of the 2020 NFL Draft. You kind of have to wonder where he was going with this assessment.

The Eagles have been crystal clear that Wentz will remain the starting quarterback in 2020 and hopefully beyond. Wentz has been diplomatic about Hurts coming to Philadelphia, where everyone knows there's a ton of pressure on him to play well and remain healthy even without a talented rookie behind him.

Max should just forget about Francesa and try placing a call to SportsRadio 94WIP or 97.5 The Fanatic. Either station would probably be happy to talk about the relationship between Wentz and Hurts, although The Fanatic would be best if he wants to gripe about Francesa (94WIP and WFAN are both owned by Entercom).

As for the dream, hopefully Max doesn't let Francesa get to him too much. These guys are all clearly struggling to keep a smile on with the lack of sports these days.

Meanwhile, in Philadelphia on Tuesday ...

see, what had happened was pic.twitter.com/qhuFwFYqQw