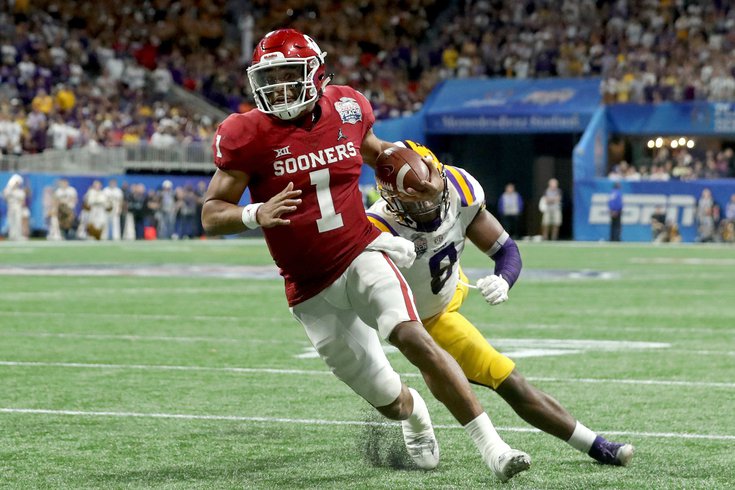 During this dead period of the offseason, we'll be comparing each of the Eagles' rookies to current NFL players. On Wednesday we started with Jalen Reagor. Today we'll take a look at second-round quarterback Jalen Hurts.

This may lack some creativity, but the player who Hurts most reminds me of is Cowboys QB Dak Prescott. First, their measurables:

Hurts and Prescott have similar builds, and obviously, they can both do damage with their legs, with Hurts having an edge athletically. They also had their share of similarities coming out of college.

• Both players were thought of as having outstanding leadership skills, toughness, and poise. Poise counts!

• Both are pass-first quarterbacks, who use their athleticism as a weapon when plays break down, and both are adept and making throws on the run after escaping the pocket.

• Their career college rushing numbers were similar. Note that they both scored over 40 touchdowns on the ground:

They also both have a similar running style, as their powerful legs allow them to run through tackles. That has made Prescott a rushing threat near the end zone in the NFL (21 career rushing TDs with Dallas), and Hurts should be a threat in close as well.

• They both played on high-profile teams. Mississippi State was the No. 1 ranked team in the country for more than a month in 2014 with Prescott as its quarterback, and Hurts obviously played for two powerhouses in Alabama and Oklahoma. The jump from the college level to the pros was not a culture shock for Prescott, and it won't be for Hurts either.

A look at Prescott at Mississippi State:

I hadn't actually thought of this until looking at each player side-by-side (and certainly this did not factor into the Eagles' drafting of him), but Hurts is so similar to Prescott, in my opinion, that early in his career he will give the Eagles' defense a great look on the scout team during Dallas week.