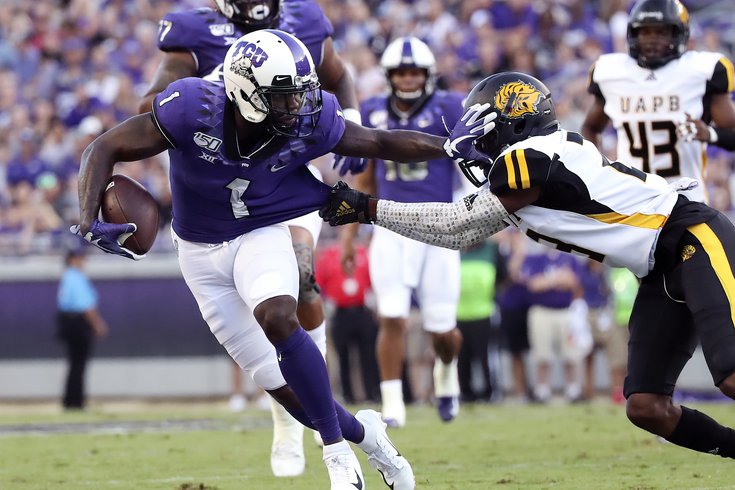 During this dead period of the offseason, we'll be comparing each of the Eagles' rookies to current NFL players. We'll kick off the series with the Eagles' first-round pick (duh), Jalen Reagor.

First, who did Reagor pattern his game after, and/or look up to?

To note, in the past, I would ask each rookie this question during OTAs, but since we won't be having those this year, I'll only have this section for those rookies who were asked this during their introductory Zoom press conferences. Reagor was sort of all over the place, in terms of the skill sets of the guys he tries to emulate.

"The great Jerry Rice of course, Michael Irvin," he said. "Those types of guys. Now, Deebo [Samuel], Stefon [Diggs], Tyreek [Hill], DeSean [Jackson]. I mean, it's a bunch of guys. I'm a highlight junkie, so I watch those guys every day. I'm just ready now. Those are my idols and now they turned into my rivals. I'm going to be going up against those guys, competing against those guys every year, so I'm just ready to embark on this experience."

Who does Reagor remind me of?

I've seen Reagor comped to players like Steve Smith, Curtis Samuel, Nelson Agholor, and others, but the player whose game I think his most resembles is the Panthers' D.J. Moore.

First, as their measurables show, they have a similar thick builds, and lack height, but both are fast, with explosive jumping ability, and they are both strong (for receivers):

Of course, many observers were surprised when Reagor only ran a 4.47 40 at the Combine, and believe he is faster than that timed speed would indicate.

Reagor and Moore had similar, modest stats in their three years in college, at least as far as first-round receivers go:

Those relatively underwhelming numbers for both players were often blamed on poor quarterback play. Read any scouting report on Reagor, and you'd think TCU's quarterback was blind with two severed arms. Similarly, according to SB Nation, " [Moore's] quarterbacks were 127th out of 128 FBS teams in passer rating his freshman season, then 85th and 109th."

Ultimately, both players got drafted in the first round because of their explosiveness. They can both get open deep, and they both have high-level run after catch ability. A look at Moore when he played at Maryland:

You can see similar play-making ability from Reagor at TCU:

In his first two seasons in the NFL, Moore has made an immediate impact:

The Eagles would obviously sign up for that kind of production from Reagor in half a heartbeat.