What they're saying: McCoy over Freeman, Alshon likely done in Philly, and cap problems for Eagles 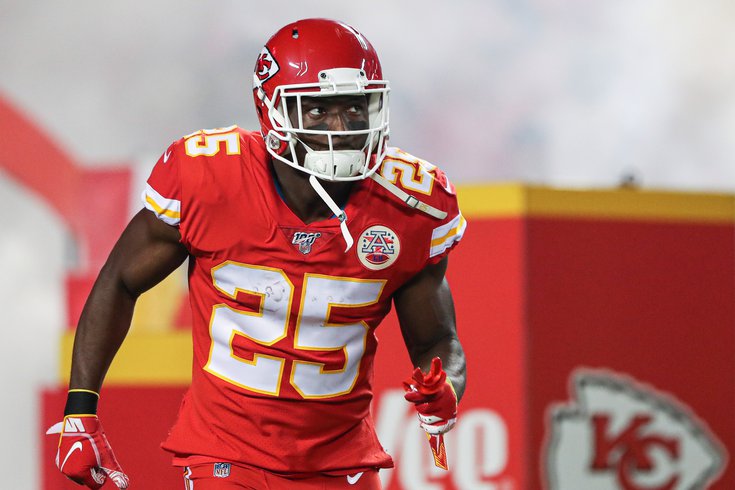 Is free agent LeSean McCoy the answer for the Eagles?

It's time for another edition of What They're Saying about the Eagles, where we'll cover all the latest news and rumors surrounding the Birds as teams hopefully prepare to return to the field this month.

On Friday, we took a look at the debate over which veteran running back — LeSean McCoy or Devonta Freeman — the Eagles prefer, and provided a clip from David Murphy's Inquirer.com column that suggested the younger Freeman was the better option, which seems to be the way the Eagles are leaning as well.

But is Freeman actually the right choice for Philly? Over at Bleeding Green Nation, Benjamin Solak makes the argument that the exact opposite is true — and it has nothing to do with nostalgia for the Shady Eagles fans became familiar with during the first half of his career.

Why is Freeman of a greater interest to the Eagles at this time? When you pop on Freeman’s 2019 film, it’s important to distinguish between his pre- and post-injury film. Freeman lost two weeks in the middle of the season with a foot sprain, and when he came back, he lacked the juice.

The concern here is that Freeman’s wear and tear has caused a permanent drop-off in his acceleration and quickness, which were drained in these clips. Freeman has lost 16 games in the last two seasons to leg injuries, and wasn’t the most spry or speedy back to begin with. A low-rider with great contact balance, Freeman was always at his best making quality decisions, fighting through glancing blows from first-level defenders, manipulating space with his vision and balance, and finishing runs with physicality in open space. A Freeman with depreciating athleticism may be completely incapable of getting much more than that which was blocked for him.

The same is not true of McCoy, who certainly isn’t the loose Shady McCoy of Eagles lore, but remains a better athlete despite being a few years older than Freeman. McCoy generated an explosive (10+ yard) run on 11.9% of his carries last season, largely because of his superior athletic ability to Freeman (8.2% of his runs) at this stage of his career.  [bleedinggreennation.com]

The speculation that the veteran wideout has played his last game in Philly has been out there for some time now, but there hasn't been any news on the Alshon Jeffery front in quite some time.

By all accounts, the Eagles are still looking to move Jeffery, who has been accused of being a leak inside the locker room and has struggled on the field to both produce and stay healthy. In fact, the Eagles already tried to trade Jeffery last season.

In his positional preview of the team's 2020 roster, Jeff McLane of The Inquirer wrote that he believes Jeffery, who may not yet be healthy when the season starts, has played his last game in midnight green.

Of the three, Jeffery is the least likely to be here when the season begins — whenever that may be. If the opener is Sept. 13, as scheduled, he may still be employed by the Eagles, but it’s unlikely he’ll be on the 53-man roster.

Jeffery suffered a season-ending Lisfranc foot injury on Dec. 9. While the Eagles have been reluctant to give a timetable on his return, sources close to the receiver said he was as far out as nine months from a full recovery from surgery, which theoretically could have him back in uniform by Week 1. The Eagles would love to trade Jeffery. They tried as far back as last October before anonymous quotes criticizing Carson Wentz, the offense and the front office were attributed to him. But he is virtually untradeable considering his contract, age, relative decline, and mostly, his injury. The Eagles could release him at any time and spread out the dead money against the salary cap (approximately $26 million) into next year, but there really isn’t an impetus right now if they hope to accrue something in return for the 30-year old.

Maybe they envision working Jeffery back into the fold once healthy. He wasn’t happy last season when he found out about the possible trade, and whether that had anything to do with his alleged comments to ESPN, I still can’t imagine him playing in midnight green again. But a lot could depend on how Jackson returns from November core muscle surgery, how Arcega-Whiteside develops in Year 2, and how the new pieces fit. The Eagles simply aren’t in a position to be dumping (former) Pro Bowl receivers, however distant they are from their best seasons, and from the starting quarterback.  [inquirer.com]

Over at The Athletic, former GM Mike Lombardi wrote about the impact the coronavirus and potential lack of fans could have on the NFL salary cap. And that's bad news for teams like the Eagles, who were already looking to be $50 million over the cap next season (although they'll roll over their remaining space from 2020 to cover some of that). That number, believe it or not, would be somewhat manageable for Howie Roseman and Co. — after all, this is what Howie does best. But if the cap decreases by, say, $30 million, as it very well could, that would put the Eagles in a much tougher spot, one they never could've foreseen when the started to put their plan together.

Now, it becomes about how they adapt...

No one knows how much the cap will decrease by yet, and they won’t find out the actual number until the 2020 season ends and the accounting process is complete. However, teams would be smart to use a $30 million reduction as a benchmark for planning purposes. (If the owners claim they could lose half a billion dollars from not having fans, then assuming a $30 million reduction in cap money next year is a conservative number.) The smart teams (the ones with money next year) will start looking at high cap number players in 2021 and trying to trade for them once the season begins, figuring dumping salaries for some teams might be necessary. Teams that budget 2021 into their decision-making methods for 2020 will be well ahead of the game next February.

Teams like the Colts, Chargers, Patriots, and Bengals won’t have to worry as they currently have more than $90 million of cap room based on the projected percentage of increase as well as the players they have under contract. Teams like the Eagles, Saints, Falcons, Texans and Steelers will need to do some trimming to fit under the current number. Once you take $30 million off the projected number, these teams will have to do more than trimming. It will not be a pretty market for sellers next free agency period.

As an example, the Eagles would be $50 million over the projected number heading into 2021, the most of any team for the 2021 season. But that would not be hard to reduce based on some inflated numbers for players who probably won’t be on the roster by then. It becomes a much harder problem if they need to reduce by $80 million —which might explain why the Eagles have not been as aggressive as usual in the late free-agent market.  [theathletic.com]

Chip on his shoulder

Earlier, we wrote about DeSean Jackson's desire to see all NFL player mic'd up during the 2020 season if fans are unable to attend. That came out of his interview with Lane Johnson on the Eagles O-lineman's podcast, "Outside The Lane."

That, however, wasn't the only interesting bit to come from that episode, as the two also discussed Jackson's abrupt departure during his first stint with the Eagles, when Chip Kelly decide the team would be better off without their best receiver.

Here's what Jackson said about the way that all went down.

"Honestly, bro, the past is the past, but I will say when I was released by the Eagles it was definitely a shove in my face, you know?” he said. “The story that was made up and the reason behind it was hard for me to respect. I would have respected it a lot more, man, if they would have just came to me and just told me basically it’s a money issue or we’re going a different route. But no, you want to come up and say I’m a hoodlum and I’m doing all this crazy (stuff)? That (stuff) was personal to me."  [nbcsports.com]

What it made it so surprising is that Jackson was just coming off his best season for the Eagles and was in the midst of his prime.

And Jackson's teammates were apparently just as surprised as he was.

“We were like, ‘What the hell’s going on around here?” Johnson remembers saying.

Jackson was suddenly a free agent, and revenge was on his mind.

"I remember the Redskins were one of the teams that hopped in and was really trying to sign me because of all the damage I did to them earlier in my career,” Jackson said. “(Owner) Dan Snyder personally sent me his private jet. I was in L.A. and he sent me his private jet, he was like, ‘Get on the plane and we’ll figure out the contract.’ RG3 actually came to my house in Calabasas and he was like, ‘Man, please bro, just come play with me.’ I just wanted to go play against y’all twice a year. I’m staying in the division because I want them to see me twice a year. … I was going to let them see what they were missing out on."  [nbcsports.com]

Finally, they say imitation is the sincerest form of flattery. And if that's true, the Browns must be making the Eagles blush.

After luring away former Eagles VP of football operations Andrew Berry to be their new GM, Cleveland is not only reshuffling their personnel, but also how their entire front office is structured, basing it more on the way the Birds operate.

There’s a method to how the Browns have set up their front office. And it’s rooted in the year that GM Andrew Berry had in Philadelphia. The new structure is, in fact, one reason why so many of the guys Berry worked with previously had to go—former assistant GM Eliot Wolf and VP of player personnel Alonzo Highsmith would have had to take de facto demotions to make it work. As the Eagles have it, the scouting department is set up in two silos. One is headed up by a VP of player personnel (Andy Weidl), the other by a VP of football operations (Berry’s old role). The former basically leads scouting, the latter everything else (analytics, etc.) In that structure, there was no room for an assistant GM like Wolf, and Highsmith likely would’ve had to be re-assigned to allow for Berry to have his own guy as scouting head (remember, Highsmith was hired over the top of Berry by GM John Dorsey). So those guys are gone, and ex-Niners exec Kwesi Adofo-Mensah is in as VP of football ops, with assistant director of pro scouting Glenn Cook promoted to VP of player personnel. So yes, there’s definitely an “analytics” feel to the front office. But the blueprint is actually borrowed from Philly.  [si.com]