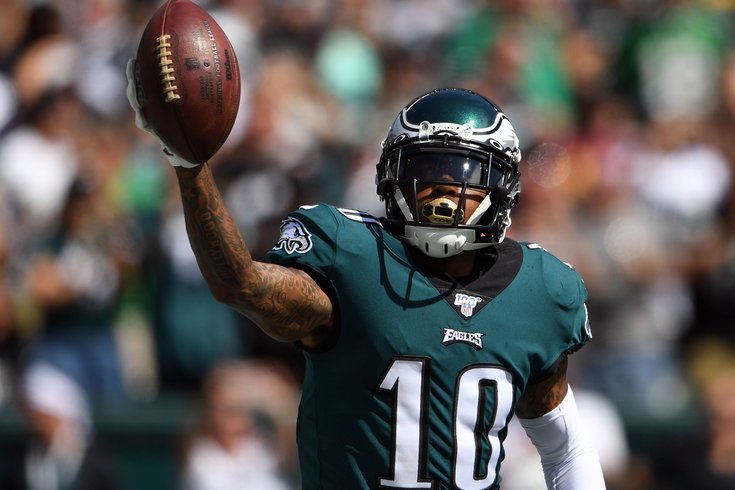 Philadelphia Eagle wide receiver DeSean Jackson would like to see NFL players wearing microphones to liven up game broadcasts for the 2020 season, which may go forward without fans in the stands.

Philadelphia Eagles wide receiver DeSean Jackson has proposed an intriguing idea to make up for the possibility that fans won't be in the stands at NFL games this fall.

He wants to see more NFL players wearing microphones to give an inside live look at what's happening on the field during the games.

Jackson appeared on teammate Lane Johnson's "Outside the Lane" Instagram Live series over the weekend to talk about his career and the upcoming season.

When Johnson suggested the idea of players wearing microphones, Jackson said he felt it would be a good idea.

"I think they should, though, bro," Jackson said. "I think the should give fans the inside to see what really goes on in between the white lines. It gets crazy, bro. It definitely does. I know in the trenches, it gets crazy. I know on the outside, too, it gets crazy, the conversations we go back and forth on."

Depending on the definition of "crazy," that could be a hard sell to the league and the networks. Players tend to use colorful language on the field. Highlight reels from mic'ed up players are often laced with censored words. If baseball players are pushing back against a spitting ban to prevent the spread of COVID-19, imagine asking football players to watch their language.

Jackson said he's never had the experience of playing sports without fans.

With the NFL season still several months away, it's still unknown whether the league and health experts will move forward without fans in the seats, as other leagues are planning to do when they resume this summer. The Miami Dolphins last month revealed mock-up plans for how a limited capacity stadium could be operated with fewer fans, but there's no indication yet that these ideas will prove feasible.

Other ideas to liven up a no-fan experience have included pumping in crowd noise by allowing TV viewers to control it through their smartphones, or flashing some comments and reactions from fans on the screen. Fake crowd noise at Germany's Bundesliga soccer games has been called "disingenuous," while South Korea's FC Seoul was fined for placing 20 sex dolls in the stands.

While Jackson's suggestion may not be entirely workable live throughout a game, the NFL might be able to incorporate more mic'ed up players into the flow of a game to give a better sense of the competition on the field and discussion on the sidelines.

The full podcast with Johnson and Jackson can be viewed below.