As Philadelphia celebrated a 38-7 demolition of Vikings, Foles walked amongst the people 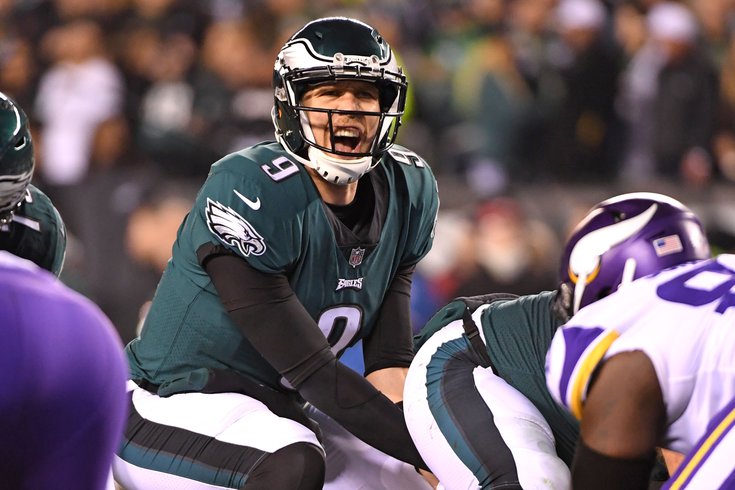 Former Philadelphia Eagles quarterback Nick Foles led a 38-7 victory over the Minnesota Vikings at Lincoln Financial Field on Jan. 21, 2018. After the game, Foles went out to dinner with family and friends, passing through Center City crowds. .

The Super Bowl LII MVP, now a member of the Chicago Bears, teased a snippet from an upcoming episode of his new podcast with former Eagles teammate Chris Maragos.

Foles described his stroll through Center City as hordes of Philadelphians celebrated the Eagles' 38-7 beatdown of the Minnesota Vikings. Foles threw for 352 yards and three touchdowns to send the Eagles to the Super Bowl.

Really excited for you to hear our new episode coming out this Friday 5/29 on my Super Bowl experience with the @Eagles. We dive deeper than we ever have before and share stories that have never been told. @MofT_Podcast @ChrisMaragos pic.twitter.com/TavIOawHDX

"I put my hoodie on and my beanie and I'm walking through the crowd — not on Broad Street, off of Broad Street a couple side streets," Foles said. "I'm walking next to people wearing my jerseys after we just won the NFC Championship Game."

"And you're incognito," Maragos said. "Nobody realizes it's you."

Foles, who also detailed his walk through the city and the week that followed in his book, "Believe It," just casually made his way through a sea of rabid people wearing dog masks and celebrating. He wound up enjoying a late dinner at Del Frisco's Double Eagle Streakhouse with his family and friends.

Two weeks later, Foles led the Eagles to their first ever Super Bowl victory in Minneapolis, taking down the Patriots 41-33. You probably heard Tom Brady admit last weekend, during a charity golf match, that it still makes him cringe when he thinks about the Eagles.

Justin Thomas to Tom Brady: “These aren’t the #Falcons you're playing against, Tiger is a pretty good closer.”

Brady: “Same colors, though... It’s the #Eagles that I cringe, not the #Falcons."pic.twitter.com/FBuPPvFsZo

Foles will have an opportunity to compete for a starting job in Chicago this season, but his legacy in Philadelphia is cemented for all time, regardless of how the rest of his career plays out.

The full "Mission of Truth" podcast with Foles and Maragos will be released on Friday.