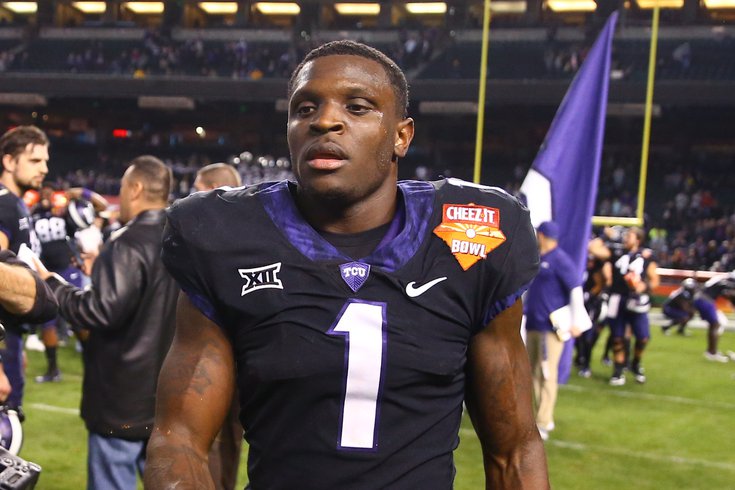 Philadelphia Eagles rookie wide receiver Jalen Reagor and his mom reacted strongly to criticism from FS1 host Skip Bayless that the team reached for him in the 2020 NFL Draft.

Last Friday on "Undisputed," Bayless again took aim at the Eagles in one his routine attempts to sow controversy in Philadelphia. While he's spent most of the post-draft period trying to create quarterback drama over the Eagles' selection of Jalen Hurts in the second round, this time he took aim at Reagor.

Skip Bayless is such an idiot. pic.twitter.com/e13lwM5b30

"Jalen Reagor went way higher than any draft expert had mocked him," Bayless said. "I'm mocking that pick right now because I thought it was a silly pick, because there were four or five other receivers I would have taken over Jalen Reagor."

It's a take Bayless also expressed immediately after the draft in April.

Watching so many good receivers drafted after the Eagles picked theirs, I still can't believe Philly went with Jalen Reagor. Cowboys got CeeDee. Eagles did not take Jefferson or Aiyuk or Higgins or Pittman or ...

Over the holiday weekend, Reagor responded to the criticism by agreeing with a tweet that characterized Bayless as an idiot.

Jalen Reagor has pinned a video of Skip Bayless mocking the #Eagles selection of him to the top of his Twitter profile.

In the video, Skip says Reagor was picked way too early and couldn’t believe the #Eagles took him, and that there were 4-5 WR’s that should’ve went before him. pic.twitter.com/sKG4qmPauZ

Since Bayless did throw in a "God bless him" and wished Reagor luck, the rookie decided to delete the tweet not long afterwards.

But that didn't stop Reagor's mom from entering the conversation.

I love how my son hasn’t played a down and the hate keeps growing!! We don’t talk, we about that action!! Twitter and all other social media has been gas on a fire that has been burning in his soul!! Get a ticket and watch the Reagor show!! You will sing a different song old man! https://t.co/Omtq3wcPZ8

To be fair, the reaction here is similar to the Gritty effect: Philadelphia briefly scorned the Flyers mascot until the rest of the world pounced on him, at which point Philadelphia embraced Gritty wholeheartedly.

There were a fair number of knee-jerk critics of the Eagles selection of Reagor with the 21st-overall pick, especially because the Cowboys selected CeeDee Lamb five spots earlier. There were also loud groans in Philadelphia at the Eagles choice of Jalen Hurts in the second round. It's not as if Bayless is pulling his schtick out of thin air.

Reagor will have a lot to live up to in Philadelphia. He'll be compared throughout his career to Lamb and Minnesota Vikings receiver Justin Jefferson, who was available when the Eagles chose Reagor and was widely considered more of sure bet. Jefferson has vowed to make the Eagles and every other teams that passed on him "pay" for overlooking him.

The Eagles' 2020 draft class has a number of big question marks, but it's hard not to be excited about the eagerness the rookies have shown to come to Philadelphia. Fourth-round draft pick K'Von Wallace even got a giant Eagle tattooed on his back before ever suiting up in midnight green.

Lamb may wind up becoming a thorn in the Eagles' side for years to come, but nothing will be sweeter than hearing Bayless eat his words and whine about Reagor lighting up the Cowboys in a big game.