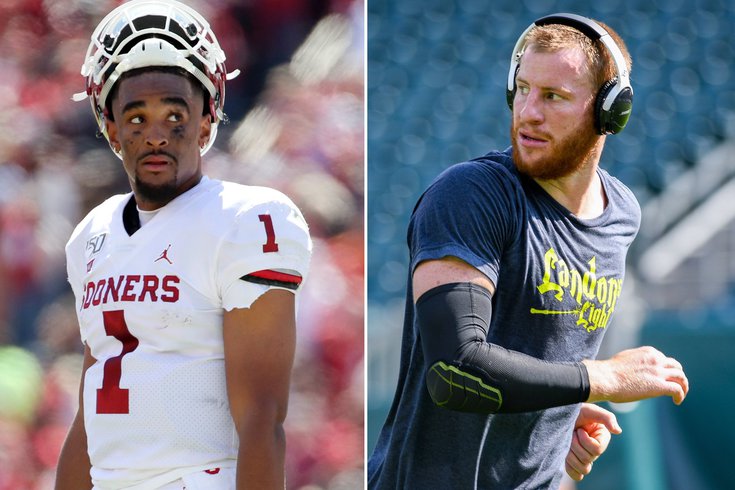 Will Carson Wentz be looking over his shoulder at Jalen Hurts?

You can’t close the cover on a book that hasn't been opened.

The COVID-19 pandemic has been difficult for all of us and there is nothing ostensibly wrong with a little manufactured sports-talk radio controversy.

But there was no debate to be settled when it comes to Carson Wentz and Nick Foles, the goal of the Eagles’ flagship radio station last week. At least not with the people that mattered.

There was never any pause from inside the NovaCare Complex. Never any thoughts about shopping Wentz for draft capital and moving down a slightly cheaper path with Foles. Never any contemplation that Wentz’s real durability issues were going to be solved by a guy with a long injury history himself and who had already pondered retirement on a couple of occasions, the latest of which came in training camp back in 2017 due to a troublesome elbow issue before Brandon Graham recommended his acupuncturist.

Trading a talented, soon-to-be expensive injury-prone commodity for a slightly less-expensive, far-less gifted injury-prone one is no more of a strategy than hope for Howie Roseman and the emotion of watching Foles lift the Lombardi Trophy was just that for the real decision-makers in South Philadelphia.

The Eagles were grateful for the run but always looked at Foles as the streak-shooting backup, the Vinnie Johnson to Wentz’s Isiah Thomas. The “Microwave” next to the All-Star.

The selection of Jalen Hurts back in April, however, is a clear signal that the Eagles understand there are real durability issues with Wentz, who has failed to finish three consecutive seasons due to various issues, first the torn ACL, then a stress fracture in his back, and finally the head injury that Wentz himself described as “scary” when I asked him about it during a Zoom call earlier this spring.

The organization wants a safety net and now you don’t need the black helicopters to envision a Wentz succession plan.

The path hasn’t been cleared and Wentz can shut down the landscaping by simply staying healthy and playing well. It’s also not happening anytime soon especially with the first virtual offseason stunting the development of rookies around the NFL.

But, the planning now exists and it's not difficult to envision how it's kickstarted: another injury to the QB1, followed by Hurts playing well, the realization that the former Alabama and Oklahoma star is on a cost-effective rookie deal, and the summation that spinning-off of Wentz’s now-massive contract for significant draft capital would make it easier to build the back end of a championship roster.

Fire up the phones in that scenario — you don’t even need to manufacture the controversy.

IT’S BETTER TO BE LUCKY THAN GOOD

If you rewind back to 2016 and ignore the revisionist history you already know the Eagles decided Adam Gase was the way to go post-Chip Kelly until the ego that now has now defined that overmatched head coach in both Miami and North Jersey had him pressing for 53-man roster control, a non-starter for Philadelphia that derailed negotiations.

From there it was onto Ben McAdoo and the unused welcome basket that might still be in the closet at the NovaCare Complex assuming there were no perishables as the New York Giants won a disastrous game of chicken for that particular franchise.

Some will even tell you Tom Coughlin was No. 3 (that part of the lore is overblown, however) before Jeffrey Lurie and the organization threw up their collective hands, called the only guy it really trusts in Andy Reid, who then told them what to do.

Fast forward four seasons and you have the first Super Bowl championship, three consecutive playoff berths, and the assumption more is coming.

“Settling” for Doug Pederson should be the lede in both Lurie’s and Howie Roseman’s football resumes and the popular coach revealed another reason why last week when he got Phil Jackson to address his team virtually.

Your average Hollywood starlet doesn’t have as much jewelry as Jackson, and Pederson took advantage of a new generation learning about one of the greatest sports dynasties of all-time through ESPN’s popular The Last Dance documentary.

The Michael Jordan-era Chicago Bulls won six championships with Jackson leading the way from the bench and P-Jax ultimately ended up winning five more with the Kobe Bryant Lakers. If you want to throw in his work as a player with the New York Knicks, Jackson has more rings (13) than fingers to put them on.

Brandon Graham alerted everyone to Jackson’s appearance with an Instagram post and later discussed it on a Zoom call with Philadelphia-area reporters.

"It was cool because that's a legend right there," Graham said of Jackson.

Pederson discussed his pandemic plan as a whole compared to other organizations last week. Some like Sean Payton and New Orleans completely eschewed virtual work and others are engaging in some teaching while leaving players to their own devices when it comes to working out.

Conversely, Pederson is using everything allowed by the league and the NFLPA in the hastily agreed-upon offseason setup once facilities around the country were ordered shuttered.

Even Pederson doesn’t know how his navigation methods will work out.

“Is it right?” the coach asked rhetorically. “I don't know. We still don't know if training camp is going to start on time or not. But, at the same time, I do know that at least we are getting some football done and hopefully we'll be better off for it.”

Pederson is already his own kind of legend in Philadelphia after delivering the Lombardi Trophy and his unique ability to marry X’s and O’s with leadership and motivational tools is a rare coupling.

Thirteen championships aren’t possible in the NFL, but Pederson already has one as a player and a coach. Expecting more isn’t unrealistic.

Ignore the white noise when it comes to the contract negotiations for Dak Prescott in Dallas. The issue is about nothing more than the player using the leverage he does have and taking a page out of the Kirk Cousins playbook.

The Cowboys want a long-term deal and Prescott’s camp, led by agent Todd France, wants a shorter window so Prescott can hit free agency again in what should be the prime of his career.

Dallas placed the exclusive franchise tag on Prescott back in March meaning the floor for the 26-year-old, two-time Pro Bowl selection is $31.4 million in 2020. If Prescott goes full Cousins and feels comfortable betting on himself that could mean consecutive franchise seasons until that option becomes untenable for the Cowboys financially, something that would enable Prescott to explore free agency in a truly unfettered fashion.

None of this is about the Cowboys pumping the brakes on their evaluation of Prescott or pushing for a less-than-market-value deal, it’s about France copying the Mike McCartney method with Cousins and getting every potential penny.

From an Eagles’ perspective, it’s also just the latest example of why the Joe Banner/Roseman model of identifying core players and getting extensions done early is always the team-friendly way (from both a real money and salary-cap standpoint) to do things even though that might get lost in the moment occasionally.