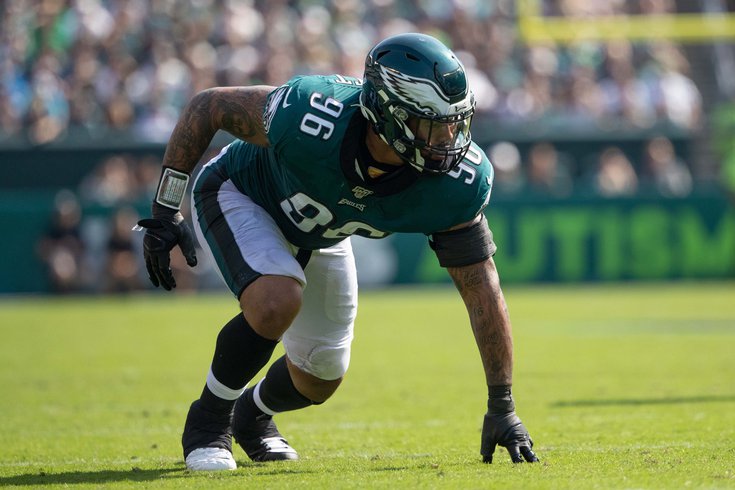 Because the Philadelphia Eagles had the fewest number of draft picks in the NFL from 2018-2019, their metaphorical cupboard isn't exactly stacked with young talent ready to break out, like it has been in the past. Still, here are five young players who are candidates to take their games to the next level in 2020.

It's nice to be a breakout candidate once, maybe, but you don't want to continue to be thought of one repeatedly, like Barnett has. With some of the other players noted below, it's more like, "It's be really nice if this guy broke out," whereas with Barnett the team needs him to break out this season, with a now 32-year-old Brandon Graham starting opposite him.

There is reason to believe that Barnett can be a very good starter in the NFL. He's still only 23 years old, he's already good against the run, and while many would like him to have more than 14 sacks through his first three seasons, he did have 7 sacks a year ago in 14 games, and his pass rush repertoire continues to evolve.

With a stacked defensive tackle rotation in the middle of the line, Barnett should see his share of favorable one-on-one matchups on the edge.

Goedert is already really good, and there's a decent argument to be made that he would start on every team in the NFL except the Chiefs, where he wouldn't start over the TE in place, and they probably wouldn't take one of their speed receivers off the field to accommodate him? Does that make sense? Anyway, as such, he's already an established player, but he also probably has some room under his ceiling to get better, hence his inclusion on this list.

With some legitimate speed threats on the outside (assuming DeSean Jackson can stay upright and Jalen Reagor shows something as a rookie), it will be interesting to see what Goedert can do with more room to operate over the middle.

The more realistic expectation would be that Goedert continues to show modest improvement in production, with an outside shot of blowing up, though the latter would probably require Ertz to miss a significant amount of time.

In case you missed any of our "Eagles new player (or current player with a new role) series," you can find them here:

If you've been following along, you'll know that Edwards' profile was a rare positive one, and we concluded that he is very likely to have an increased role in 2020. At a minimum, he should be in the game when there are three linebackers on the field. He was very good against the run as a rookie, and he can fill a role in Jim Schwartz's defense similar to that of Joe Walker or Dannell Ellerbe, but potentially be much better than anyone the team has had in that role. That would put his game participation share at somewhere around 10-30 percent, depending on the opponent.

He could be a key player against some of the teams in the NFC that want to run the ball, like the Cowboys, Giants, 49ers, and Seahawks, for example. You can look at some of his better plays against the run from 2019 in the Twitter thread below:

The question is whether or not Edwards can also be effective against the pass, as he was largely untested in that area as a rookie. To be determined if Jim Schwartz will allow Edwards to show that he can be something more than a run down specialist, or if concerns with Edwards' athleticism will limit him to that role. The bet here is that Edwards will get that chance, and he'll be the No. 2 linebacker, alongside Nate Gerry, assuming the Eagles don't add a starting linebacker.

Sweat was getting hyped up a season ago as a potential breakout candidate after his teammates had a lot of good things to say about his work in practice. He did have a bigger role in the regular defense, and was able to contribute four sacks in 2019.

A concern with Sweat coming out of college was his extensive injury history, but he has managed to stay healthy so far in his NFL career. In 2019, he played all 16 games, and while he was placed on IR in 2018, that was really more because the Eagles needed a roster spot than it was because Sweat had a season-ending injury.

Sweat showed flashes in his first year as a regular rotational edge rusher. Like here:

The challenge for him in 2020 and going forward will be whether he can get the most out of his impressive athleticism and play with more consistency.

Barring any further offseason moves at corner, it's looking more and more like Maddox will be a starter on the outside in 2020. At just 5'9, that's a dicey proposition, as Maddox has struggled as an outside corner when forced into that role in the past (see: Seahawks playoff game).

While outside corner is probably not his ideal role, Maddox is tough, talented, and athletic, and he'll have a better chance to succeed that Jalen Mills did in the past, as Maddox will have Darius Slay playing the other corner spot, and likely (I think?) trailing the opposing offense's best receiver.