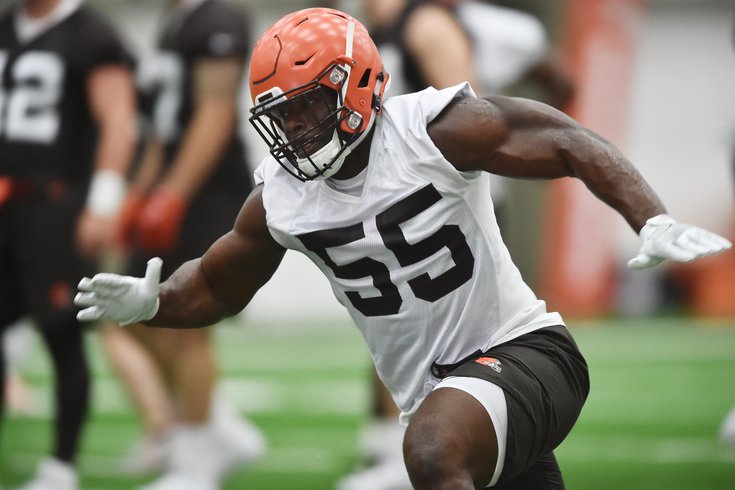 Genard Avery played so little for the Eagles that there aren't even any pictures of him in our archive of him in an Eagles uniform.

We already covered Matt Pryor. We'll also get to guys like Darius Slay, Javon Hargrave, Jatavis Brown, Will Parks, Nickell Robey-Coleman, Andre Dillard, T.J. Edwards, Jalen Mills (in a safety role), Avonte Maddox (as an outside corner), Josh Sweat, and others, if you have requests.

At 6'0, 250, Avery has more of a linebacker's body. He is a very undersized edge rusher, and he has 31" T-Rex arms, but as you would expect from a smaller player, he does have good athleticism:

The cost to acquire Avery was a 2021 fourth-round pick, and he only wound up playing 33 snaps in the regular defense for the Eagles the rest of the season. While the trade for Golden Tate at the 2018 deadline was more of a "win-now" type of move, the trade for Avery had the long-term in mind, per Howie Roseman.

"He obviously had two and a half years left on his contract," Roseman said during his year-end press conference in January. "He was someone we thought was a young player who had explosive traits and when we talked to the defensive coaching staff, they said this trade will pay off more in the future than it will through the course of the year, and so we understood that. We understood that it was a high price to pay, but it's hard to find guys with his skill-set and he's a versatile guy. But he'll be best served with an offseason."

Avery's 33 snaps in 2019 weren't super easy to find, but they were more revealing than anticipated when I found them. He exclusively played on passing downs, and always in a two-point stance. Here's what I saw, in Twitter thread form:

This offseason, we're looking at a handful of Eagles players who are either new, or are already with the team but we perhaps don't know a lot about them just yet due to limited action. Here we'll cover Genard Avery. 🔥 (Thread and article)https://t.co/wAKzjKT3DG

Conclusion: Avery's appeal is that he can maybe be a hybrid linebacker / pass rusher. The Eagles only used him as the latter, in his limited snaps. His best usage was as a stand-up rusher in a "Joker" role.

We didn't include special teams clips, but he looked good in kick coverage, so he at least has that. In the regular defense, just as a pass rusher, I view him as a niche player that Schwartz will have to go out of his way to try to get him snaps in a way he can be successful. That said, if Avery can become at least a competent linebacker, his pass rush opportunities can be disguised, and thus become much more effective.