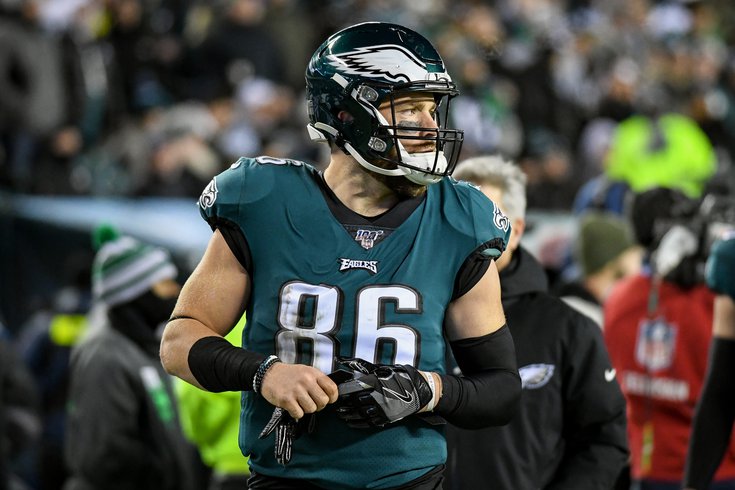 Question from Rich: Is Howie even remotely considering some kind of trade that involves Zach Ertz? I seem to hear that frequently mentioned.

Opinions on Ertz's future with the team are wide-ranging.

The logic for trading Ertz would be that they would make way for Dallas Goedert, a young, complete tight end who already looks like he might be a very good long-time starter in the NFL, while Ertz still has value. However, there’s no evidence to suggest that the team would seriously consider trading him. So don’t hold your breath. He’s not going anywhere.

Personally, I don’t think a trade or an extension are particularly good ideas.

By trading Ertz, the Eagles would be sacrificing a lot in the short term. In his first four years in the NFL, Carson Wentz's most reliable target, by far, has been Ertz. On a team that still has done nothing to fix their abysmal wide receiver position, Ertz's importance to Wentz heading into the 2020 season cannot be overstated. (Disclaimer: I do think a trade becomes significantly more logical from the Eagles’ perspective if they think the 2020 season isn’t going to happen, but we’ll punt on that topic for now.)

As for an extension, assuming that contract would be a major raise in pay, I'm not exactly sure why that would be a good idea for the Eagles, since Ertz is under contract through the 2021 season. The first new year of any contract extension will be the 2022 season, or Ertz's 10th year in the league, during which he'll turn 32 years of age. That also happens to be the year that Goedert will become an unrestricted free agent if the Eagles don't work out a new deal with him. So, what's the rush?

Maybe it might be a good idea to wait and see if he stays healthy, and doesn't experience some sort of decline? Why commit market-setting type of money to Ertz now when there's a reasonable chance that Goedert will be better than him by the time Ertz's current contract expires?

Question from TDB: I just don't get it. Why wouldn't the Eagles have brought in an FA WR? It takes pressure off any of the WRs drafted; it doesn't force your hand as to draft strategy; it mitigates risk if you trade back; it opens up the possibility for drafting BPA in the first round; it adds a much needed veteran presence to an inexperienced corps; it replenishes the loss of Alshon/Ags with a fresh face.

Question from The Ghost of Draft Day Past: You were fairly certain they'd pick Barnett a few years ago, and were correct. Obviously picking later introduces the possibility of a lot more variability, but do you have any sense of "If this guy is still there at 21, boom?"

Question from Scojos: Is there any market for JP? I thought it HAD to be time to move on, but with an irregular offseason now I wouldn't mind bringing him back since there will be less time to develop / evaluate Dillard as a starter.

I saw somewhere (Les Bowen, I think?) that JP is looking for a one-year deal worth around $10 million. So if that’s the asking price, no thank you. If he holds firm to that, he could be waiting a while until a team comes calling. It would probably take an unexpected, season-ending LT injury on a contending team with cap space for him to get that kind of money.

Also, is your name Scojos because of Scojo’s in LBI?

Question from Buck: With everyone's consensus No. 1 pick being Burrow, I wonder what the ramifications would be if they took someone else. Not trade the pick to another team for them to take Burrow, but say they took Chase Young. That would completely alter everyone's expectations on the top 10-15 picks. Would Washington take Burrow, trade the pick, take Jeffrey Okudah? It would be an interesting exercise from a mock draft perspective.

Washington already tipped their hand that they’re not going quarterback at No. 2, as in, they’re not taking Tua Tagovailoa or Justin Herbert. But if Burrow became available, it’s hard to imagine that they wouldn’t just immediately sprint to the podium (er, uh, sprint to the phone) to pick Burrow, in which case the result of the top two picks remain the same, just in reverse order.

Question from DB: With weed now essentially legal in the NFL, would you take a chance on a guy like Martavis Bryant?

I had completely forgotten all about him. His skill set does fit what the Eagles could use though! 4.42 speed, 15.1 YPC, etc. However, he remains suspended indefinitely, which kinda makes me think that there are more concerns than just weed that’s keeping him out of the league.

Question from Fred Barnett: Am I the best wide receiver the Eagles have drafted in the last 40 years?

Question from RKotite: On defense I feel like the Eagles have multiple playmakers at DT, maybe DE, and CB. Don't they need a solid safety draft this year? I feel like there are 4th round types that would be better than anything they currently have.

I think the Eagles’ safety position has the potential to be very bad this season, and I’m with you that it wouldn’t be the worst idea to draft one. However, while there are a few good safeties likely to land in rounds one and two (the Eagles won’t take them there), I don’t think this is a very good safety draft in terms of depth.

Question from Miguel: Why not make a rule change that if the kicker during a kickoff makes it through the uprights they get like 1 or 2 points and the opposing team then starts from the 20 instead of the 25 or something like that. I think that would make kickers much more valuable and make games a little closer. Any thoughts or modifications you'd make to this rule change?

Question from DB: Spring sport you miss the most?

The Sixers were really frustrating to watch this year, but I was still looking forward to the playoffs. I kinda saw that as win-win, as in, if they made a run, then yay, fun! If not, at least Brett Brown would (likely) be gone. I hadn’t started watching the Flyers yet, but I was also looking forward to learning 5-10 names of guys on the team for the playoffs, and yelling at the tv whenever Flyers fan booed the refs, as if I knew what I was talking about.

And then baseball is such a great sport to just be on your tv, while you get things done otherwise, or take a nap.

Question from Hinkie: Did Carole Baskin kill her husband?

I finally watched Tiger King. Banged it out in one long sitting, and no, I don’t think she killed her husband. However, I would like to take this opportunity to post my favorite part of the series: