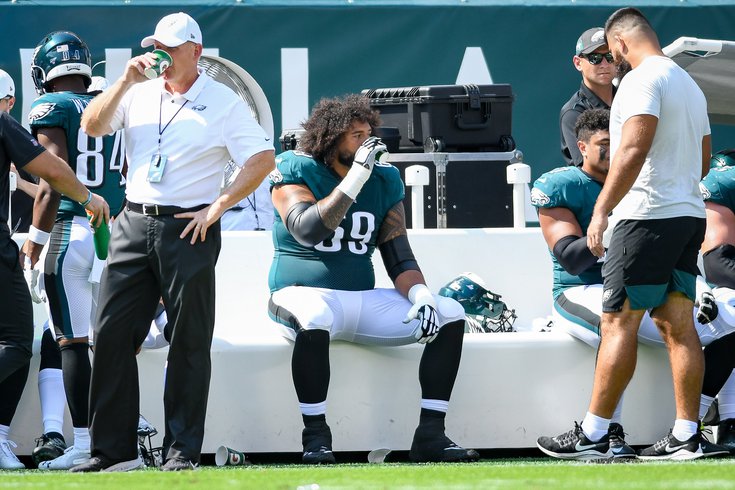 Those players, so far, will include Darius Slay, Javon Hargrave, Jatavis Brown, Will Parks, Nickell Robey-Coleman, Andre Dillard, Matt Pryor, T.J. Edwards, Jalen Mills (in a safety role), Avonte Maddox (as an outside corner), Josh Sweat, and maybe Genard Avery. If you have any other suggestions, let's hear them.

Anyway, we'll get the series started off with a bang, which obviously means... drum roll... Matt Pryor!

Pryor was a sixth-round pick of the Eagles in the 2018 NFL Draft, and he has been developing quietly behind the scenes, cross-training at RG and RT. While he has often looked good in training camp, particularly in one-on-one drills, the preseason games told something of different story.

It was not a great sign for Pryor during the 2019 offseason when the Eagles felt more comfortable having swing tackle Halapoulivaati Vaitai temporarily serve as the starting RG in 2019 training camp while Brandon Brooks continued to rehab from a torn Achilles. Brooks unexpectedly returned in time to start Week 1, but if he hadn't, it would have been Vaitai at RG, not Pryor.

As a result of multiple injuries along the offensive line in 2019, however, Pryor got his first significant taste of action in the NFL, playing RG in the second half of the Week 12 matchup against the Seahawks. He also saw significant action Week 17 against the Giants after Brooks suffered a season-ending shoulder injury, and then finally, he got his first ever start against the Seahawks once again, this time in the playoffs. In total, Pryor played 147 snaps on the season.

The general feeling is that because Pryor didn't allow any sacks, he probably played reasonably well, mainly because we just didn't hear his name mentioned in those games. Playing 147 snaps and going unnoticed was certainly a good thing for a player in Pryor's position, especially taking over for a Pro Bowl guard in Brooks.

In 2020, Pryor could have an elevated role, as the primary backup at RG, and possibly also RT, with Vaitai signing a $50 million(!) deal in Detroit.

Here are Pryor's notable moments from the 147 snaps he played in 2019, in Twitter thread form.

This offseason, we'll look at a handful of Eagles players who are either new, or are already with the team but we perhaps don't know a lot about them just yet due to limited action. We'll start off the series with Matt Pryor, ha. 🔥 (Thread and article)https://t.co/mQcrYk9Rgx

Conclusion: Pryor is a backup only, in my view, and maybe only at guard. His size and power are nice, but if he were to have to start multiple games, opposing defensive coordinators would look to put him in situations where he was forced to try to handle speed, and I don't think that would go well.