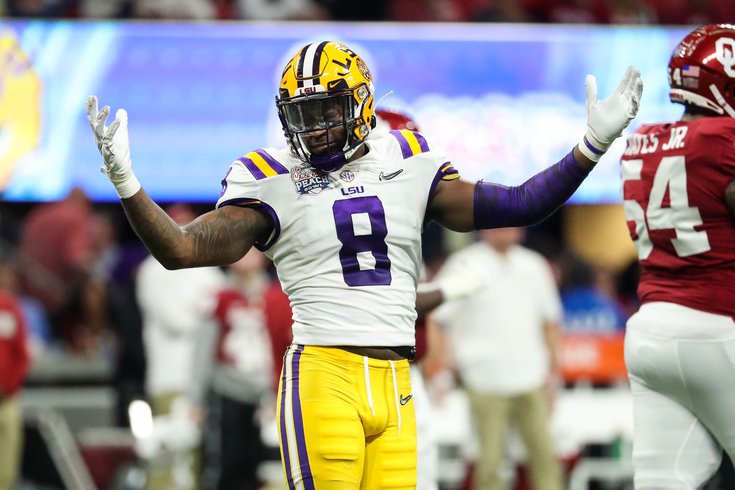 Yearly reminder: The Eagles don't draft linebackers (like Patrick Queen above) in the first round.

On Thursday, we published our fourth Philadelphia Eagles-only mock draft of the offseason, the trade-back edition, which to my surprise was (mostly) well-received. Today we'll take a peek around at some of the national guys and see who they have going to the Birds at 21st overall.

The void at wide receiver hasn't gone away, and the Eagles will have to think long and hard about whether they are ready to enter the 2020 season with the oft-injured Alshon Jeffery and DeSean Jackson, along with J.J. Arcega-Whiteside off a disappointing rookie campaign, as their wideouts again. Justin Jefferson out of LSU is for sure in play at No. 21. But Philadelphia also could really use a spark in the middle of the defense. Queen is a rangy, off-ball linebacker with burst and great tackling ability.

#JimmySays: This was a two-round mock draft by McShay, with the Eagles taking Utah CB Jaylon Johnson in the second round, lol.

If the Eagles don't trade up for one of the "Big Three" receivers (Ruggs III, Lamb, Jeudy), they could end up feeling pretty good about sitting tight and scooping up Jefferson. Crazy statistics in last year's championship season (111 catches, 1,540 yards, 18 TDs) matched by great interviews and surprising speed at the combine (4.43 40) make this a perfect fit.

#JimmySays: If he's still there, I'm sure the Eagles would be more than happy to scoop up Jefferson.

Philly needs juice at wide receiver. Jefferson provides that, having pleasantly surprised many with a 4.43 40-yard dash at the NFL Scouting Combine.

#JimmySays: I think we're going to be seeing a lot of Justin Jefferson.

No sense overthinking this selection. The WR corps needs to be upgraded, and Higgins provides a big target on the perimeter for Carson Wentz.

#JimmySays: This is going to sound hypocritical since I had Higgins as the Eagles' first round pick in our initial Eagles-only mock draft of the season, but I can't see him going first round. He skipped Combine workouts, citing that he didn't have as much time to prepare as the rest of the receivers because he played in the National Championship Game. That's loser stuff. Justin Jefferson competed and helped his stock greatly in Indy, as did several other players from LSU and Clemson.

Much more than just a speed merchant. According to Pro Football Focus, Ruggs dropped just five passes during his three college seasons. And he's a highly efficient route runner.

#JimmySays: Barring some sort of gas mask smoking contraption video emerging on draft day, he won't be there at 21.

#JimmySays: Reuter actually went the extra mile, and did a four-rounder. His complete list of Eagles picks:

I like all those players, but I don't like the round value for Taylor, Jackson, Perine, or Smith-Williams. I do applaud the hustle.

Is there a more widely-mocked pick than the LSU wide receiver to the Eagles?

#JimmySays: Joe Burrow to the Bengals probably beats it.

They have to get help for their passing game. Mims impressed at the combine, and he would give Carson Wentz some much-needed help.

#JimmySays: I like Mims, but this is a reach.

We've routinely had the Eagles taking a cornerback here for weeks (OK, months), but now that Darius Slay is in the fold the attention turns elsewhere. Receiver is a popular pick too, and Justin Jefferson would make sense, but with the No. 2 edge rusher still available Philly instead decides to address that position.

#JimmySays: Chaisson is a good player, and I'm sure he'll make a 3-4 defensive coordinator happy, but he's a very unlikely Eagles target.

The Eagles are glued to their televisions as Jeudy falls, and they can't help themselves. The 49ers would love the extra Day 2 picks.

#JimmySays: The Eagles trade up to 13 in this scenario. It'd be nice to know what the cost was to do that so I can ridicule it.

Sure, the Eagles could take a receiver here, but they'll still get a good one at No. 53 with the depth in the class. Even though LB is never a top focus for the franchise, they should jump at the chance to land one of the top linebackers in the class to address their biggest remaining need on defense.

#JimmySays: "I know they're not going to draft a linebacker, but let's give them a linebacker." Also, waiting 32 picks to draft a lesser WR is an absolutely terrible strategy.

In this mock, the Eagles decide to wait on addressing the need at WR and instead fill a need at linebacker with Murray. He's a sideline-to-sideline player that can get a bit overzealous at times but has a good chance of being a solid NFL starter.

Carson Wentz became the first quarterback to throw for 4,000 yards without a 500-yard wide receiver as the Eagles’ wide receiver corps was decimated by injuries. The trio of Alshon Jeffery (10), DeSean Jackson (three) and Nelson Agholor (11) played only 24 games in 2019. Few players can match the 4.27 speed of Ruggs, who has scored on one-quarter of his career touches at Alabama, and he would provide that field-stretching element they expected when they brought back D-Jax in 2019.

#JimmySays: To note, Hanson has the Eagles trading their second-round pick to move up 6 spots. I have several thoughts:

So I just don't see this as a realistic scenario. I will say that I did not know that Wentz was the first player to ever throw for 4000 yards in a season without a wide receiver going over 500 yards, which is a remarkable stat, so nice job by Hanson there.