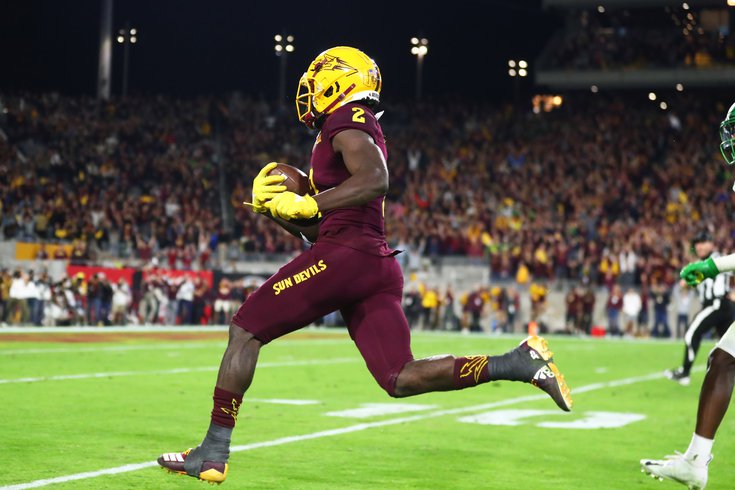 As a reminder, after the Darius Slay trade, the Philadelphia Eagles are projected to have 8 draft picks this year, with three in the fourth. Also, be sure to check out our previous editions:

In this version, we have a first-round trade.

On Wednesday, we mapped out the 20 draft slots before the Eagles' pick at No. 21 overall, and came to the conclusion that it's (a) unlikely that any of the "top three" wide receivers (Bama's Jerry Jeudy and Henry Ruggs, as well as Oklahoma's CeeDee Lamb) are likely to fall that far, and (b) LSU's Justin Jefferson may not even make it there either.

In the event the Eagles can't land any of those four receivers, it would make sense for them to trade back and grab one of the next tier of receivers, while adding a draft pick as well.

In each of the last two drafts, the Eagles have made deals with the Baltimore Ravens, and they are a logical trade partner this year as well, as they have two 2's, two 3's, and two 4's. Here's trade compensation that would make some sense:

Aiyuk was a junior college transfer who only played two years at Arizona State. His numbers:

Aiyuk has bigtime shake once he gets the ball in his hands, and provides added value as a kick/punt returner. A highlight reel:

While the Eagles' media and fan base was right last season to fixate on the Eagles' lack of a receiver who take the top off a defense once DeSean Jackson went down, the other element missing from the offense was a player who could get yards after the catch. Nelson Agholor was OK in that area if he could actually catch the football, but obviously, he is now gone.

Jackson will be back, and while the Eagles should not count on him to play a full season, he is at least a guy who can take the top off a defense. The Eagles don't have any receivers who can consistently get yards after the catch, and Aiyuk can add that element.

(Also, the Eagles haven't had a player that the crowd can yell an "OOOOO!" sound for in a while, like "DUUUUUCE," for example. And "YUUUUUUK" would be fun. #Analysis.)

On the advice of Cris Carter, Arnette opted not to declare for the draft after the 2018 season, and he stayed at OSU for his redshirt senior season. The Athletic's Bill Landis did a nice job telling his story, which contains some concerns (not getting along with positional coaches) as well as some positives (fending off five-star recruits and keeping his starting job).

As a player, Arnette lacks the same kind of elite athleticism as some of his defensive back teammates (Jeffrey Okudah, for example), but he competes like hell in press, he's physical, he's tough (he played the entire 2019 season with a broken wrist), and he has some inside-outside versatility that the Eagles favor. A highlight reel:

Even after trading for Darius Slay, the Eagles still have a need at corner, as Slay is essentially on a two-year deal in Philly, and the other projected outside corner, Avonte Maddox, is only 5'9. There may be some teams turned off by Arnette's personality, but he feels like an out-of-the-box Jim Schwartz favorite.

Bartch was the only D-III player to compete at the NFL Combine, after a good week at the Senior Bowl. He enrolled in college as a tight end, but was asked to put on weight and move to left tackle, which he did without losing his athleticism.

In the pros, Bartch could probably play LT or LG, which makes him an interesting fit for the Eagles. In the short term, Jeff Stoutland could cross-train him at both spots, and Bartch could serve as depth on the left side of the line, as a backup to both Andre Dillard and Isaac Seumalo, while Matt Pryor backs up Lane Johnson and Brandon Brooks on the right side.

In the long-term, he could fill in as a starter for Seumalo at LG, with Seumalo moving to center whenever Jason Kelce retires. Or alternatively, Bartch could be a contingency plan at LT if Dillard busts, which feels like a possibility. In other words, Bartch would be a player worth developing who would give the Eagles options.

Gibson is a versatile playmaker for Memphis, working out of the slot, as a running back, and as a kick returner. He is stoutly built, and he has some juice.

Teams will have to figure out what they want to do with Gibson, who ran a 4.39 40 at the Combine at 228 pounds. In Philly, I think you put him in the easiest spot to succeed, which in my opinion is at running back, where the transition to the NFL doesn't take as long, and Gibson will be covered by linebackers instead of slot corners in the passing game. Plus, the Eagles need added depth behind Miles Sanders.

He is also thought of as a very good run defender. The Eagles are always going to be on the lookout for defensive ends, and Greenard is a productive player who could slide to Day 3 because of his injury history and just an OK Combine.

Bowden is a gifted athlete who transitioned from wide receiver to quarterback in Kentucky's sixth game in 2019, and led the Wildcats to a bowl game.

(In football guy voice) This guy is just a heck of a football player.

But seriously, Howie Roseman seems to be intrigued by athletes who played quarterback at one point in college, as evidenced by the opportunities the Eagles have given to guys like Trey Burton, Greg Ward, and Braxton Miller. He'll likely play in the slot in the pros.

"Albert O" ran a 4.49 40 at 258 pounds, and in three years at Missouri, he caught 23 touchdown passes, which is outstanding production for a tight end. Some of those TD catches were of the impressive variety:

And yet, everyone has this guy as a Day 3 pick. Huh? Why? Oh, this, from Lance Zierlein of NFL.com:

Okwuegbunam will force evaluators into deciding priorities as his pros and cons list is fairly polarizing. His routes are raw and inefficient. He isn't difficult to cover when he's asked to gather and break, but he has speed to separate on over routes and seam attacks when he opens and goes. His ability to win with the ball in the air -- especially in the end zone is outstanding. He's not a physical blocker and is better suited as a move tight end. Scouts question his overall toughness as a player, but the potential is very high, which makes him a classic boom-or-bust prospect.

So Okwuegbunam's doesn't block well. Meh, neither does Ertz, though questions about his "overall toughness" are certainly concerning. But at the end of the fourth round, for a guy who can run like a wide receiver and make great catches in the end zone? I'd call this a good gamble.

Stanley fits the physical profile of the type of quarterback the Eagles clearly prefer.

He is a traditional big, inside-the-pocket quarterback with a big arm. Note the nearly 60-yard throw while moving to left at the 0:21 mark below:

Of significant concern would be his 58.3 percent career completion percentage, and 7.2 yards per attempt. Bleh.

The 2020 offseason is heading in the same direction as the 2019 offseason at the backup quarterback spot. A year ago at this time, the Eagles seemed to be riding with Nate Sudfeld as their temporary No. 2 quarterback, and they drafted Clayton Thorson in the fifth round.

Don't be surprised if the Eagles draft another Day 3 backup. Stanley is undoubtedly a better prospect than Thorson, but has similarly limited upside.

Taylor hasn't played much football, as religious beliefs kept him off the field until his mother finally allowed him to play in college. As such, he'll be a project for whatever team takes a chance on him.

What Taylor does have are very good athletic measurables.

At a minimum, Taylor should be an immediate special teams contributor, with a chance to grow as a player in the regular defense over time.