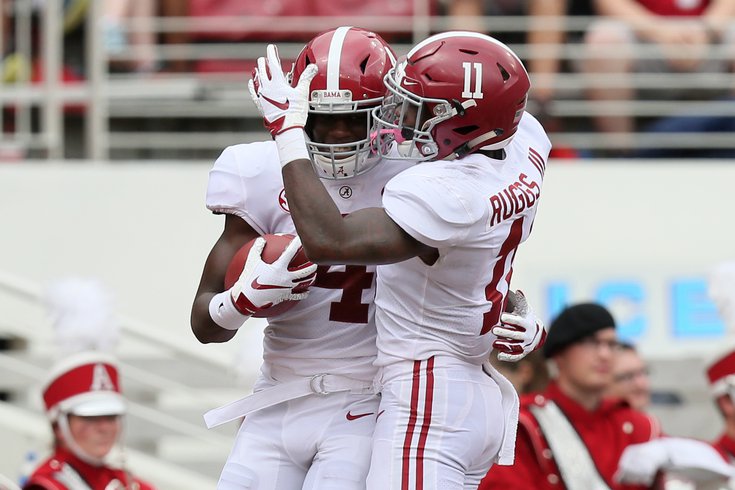 Alabama's Jerry Jeudy and Henry Ruggs are likely to be gone by the time the Eagles are on the clock at pick No. 21.

The Philadelphia Eagles, as you all saw, did not add to their wide receiving corps during free agency, and barring a trade for a veteran receiver, will have to rely solely on the 2020 NFL Draft to address their most glaring offseason need.

And so, with the Birds potentially painting themselves into a corner, it's perhaps worth taking a look at the 20 draft slots before the Eagles' pick at No. 21 overall, and determining which teams could deplete the pool of receivers. Let's go chart form (depth charts via Ourlads.com):

MORE: NFL rumors: Yannick Ngakoue tweets his 'time is up' with Jags, continues to hint at Eagles as next team | Live NFL rumors: Will the Eagles be opportunistic, snatch up CB Dre Kirkpatrick? | Should the Eagles trade for a wide receiver, like Brandin Cooks or Sammy Watkins?

And then the Eagles have to also worry about teams behind them trading up ahead of them. Let's just finish out the first round:

Analysis: In our view, there's little hope for one of the top three receivers – Alabama’s Jerry Jeudy and Henry Ruggs, as well as Oklahoma's CeeDee Lamb – falling all the way to pick No. 21. If the Eagles want to make a move for one of those guys, it will probably require too far a leap, and as a result will be too cost-prohibitive, especially with the Eagles already trading away their higher third-round pick for Darius Slay.

The Raiders are the Eagles' worst enemy in this draft, while the 49ers and Broncos have glaring wide receiver needs as well. All three of those teams have draft positioning that lines up with where the best receivers should be expected to go off the board.

Beyond the Raiders, 49ers, and Broncos, there are plenty of other teams who could also opt to go wide receiver early, so it's not as if a guy, like, saaayyy, Justin Jefferson is a sure bet to be available at pick No. 21 either. As such, it is all the more risky for the Eagles to solely rely on the draft to solve their inarguable issues at wide receiver.