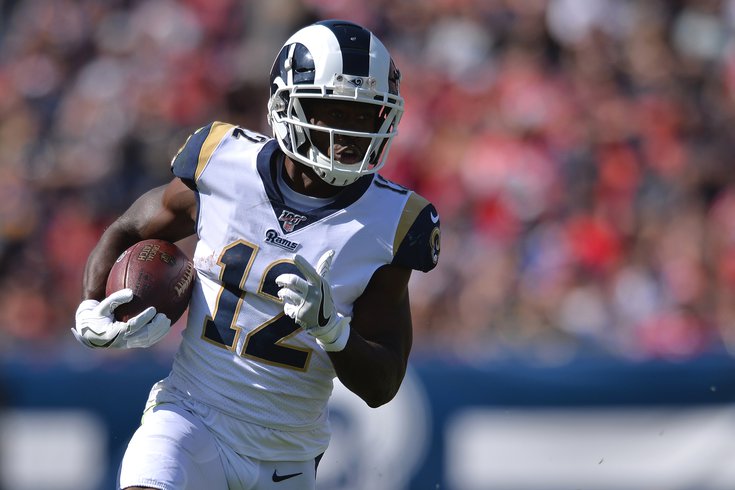 Brandin Cooks is good, but he his concussion history is extremely concerning.

NFL free agency came and went, and the Philadelphia Eagles opted not to address the wide receiver position, which was – and still is – their most glaring weakness on the roster.

In a post-free agency conference call, Howie Roseman set off some alarms locally when he stated that the Eagles probably like their receivers more than the general public does, though he did note that the team explored some receiver options in free agency, and he left the door open to make moves there going forward.

"We had conversations with all these guys that you've seen [signed]," Roseman said. "At the same time, I think we do view the receiver position maybe different than it's publicly viewed. I understand where we were toward the end of the year and who was out there and we've got to increase the talent level, but we're also excited to get some of those guys back, who were not healthy. And we're also excited for young guys to take another step.

"Now, that doesn't mean that we're done addressing it, that we're not going to look for opportunities to improve that position, but we don't have the luxury of just kind of being in a vacuum and just looking at the receiver position, we've got to kind of deal with the information as we get it, and I think that overall, we're happy with where we are right now, knowing that we still have other areas to improve."

For now, I'm going to operate under the assumption that the Eagles can't possibly be happy with their wide receiver position, because, I mean, how can anybody be happy with Alshon Jeffery (slow, aging, injury-prone, distraction machine), DeSean Jackson (soon-to-be 34 years old, and even more injury-prone), J.J. Arcega-Whiteside (really bad rookie season), and Greg Ward (great story last year, but come on).

And so, as rumors for available wide receivers emerge, we'll continue to discuss them. Over the last few days, a couple more names emerged, in the Rams' Brandin Cooks, and the Chiefs' Sammy Watkins.

There seems to be some smoke building around the Rams trying to deal Cooks, who has already been traded twice in his NFL career, both times for first-round picks.

First, NFL Network's Mike Silver reported a couple weeks ago that Cooks could be dealt:

Brandin Cooks has been traded twice in his career (Saints to Patriots, Patriots to Rams), with a first-round pick included on each occasion. The 7th-year WR could be traded again this offseason, and it likely wouldn't take a 1.

And then late Sunday night, Peter King dedicated a nice chunk of his Monday Morning QB column to a potential Cooks deal.

In an earlier version of the now-changed story, King hypothesized on what it would take to get him (h/t BGN):

My best landing spots for Cooks:

1 Philadelphia, for the 53rd pick in the draft.

4 Washington, for the 66th pick in the draft.

That part no longer exists in King's original column. (My guess? The Rams were like, "Peter, you're going to make us look bad when we only get a Day 3 pick for him. Can you get that out of there?")

And then Cooks posted the following message, which either means he wants out of L.A., or he's bored by being stuck inside during the Coronavirus outbreak:

The Eagles have had interest in Cooks multiple times in the past.

• He was among six players (the others being Anthony Barr, Kyle Fuller, C.J. Mosley, Odell Beckham, and Ha Ha Clinton-Dix) that the Eagles targeted in the 2014 NFL Draft, before yada yada yada they ended up with Marcus Smith.

• And then during the 2017 offseason, the Eagles were engaged in talks with the Saints for a deal that would have sent Malcolm Jenkins and a draft pick to New Orleans for Cooks, but the Saints eventually dealt him to the Patriots instead.

In 2020, there is no way in hell the Eagles (or anyone else for that matter) should trade a second-round pick for Cooks. That is just nuts. Why? Well...

• He's still only 26 years old (he turns 27 in September), which is super young for a player with six years of NFL experience, but he already has five known concussions, two of which occurred during a 25-day span in October/November of 2019. As such, he cannot be viewed as a 26- or 27-year old player. He has to be viewed as potentially "one concussion away from the end of his career."

• He has base salaries of $8 million in 2020 and $12 million in 2021. Those numbers aren't necessarily prohibitive on paper, but again, you're giving that to a guy who is at a high risk for a season- or career-ending injury.

Certainly, a healthy Cooks would help the Eagles' offense. In the last five years (in other words, excluding his rookie season), he has 23 career receptions of 40-plus yards. For context, over that same stretch, DeSean Jackson has 17. Cooks is a deep threat with 4.33 speed, and other outstanding athletic measurables:

If the Rams are interested in, sayyyy, a fourth-round comp pick, or maybe a 5 or a 6, plus, ohhhhh, Matt Pryor or Jordan Mailata or something, then sure. Otherwise, the Eagles need to keep their Day 1 and Day 2 picks.

RELATED: So the Eagles just aren't going to address WR in free agency?

The Cooks speculation at least had some name power behind it, in Peter King, whereas the Watkins rumor is less credible. On their team website, the Eagles have been updating their "rumor mill," with a disclaimer at the top that states:

Rumor Mill is an aggregation of Eagles-related reports, rumors, and wild speculation. The team does not endorse these items.

Within their "rumor mill," an item from Twitter fake insider "Incarcerated Bob" appeared, saying the Eagles have interest in Watkins.

We actually covered Watkins (and some other potential trade candidates) in a mailbag two months ago, with our take on Watkins here:

• Sammy Watkins, Chiefs, 27: He's scheduled to count for $21 million on the cap next season, $14 million of which the Chiefs will save if they cut him. Any team trading for Watkins will acquire his $14 million salary cap hit (salary plus workout bonuses). Nobody is trading for him. I do think he makes some sense in free agency at the right price.

My stance on that remains unchanged. From the Eagles' perspective, it's hard to imagine them putting $14 million of their cap resources toward Watkins, not to mention trading another pick for him, when they could have had Robby Anderson for around $10 million per season or Breshad Perriman for around $8 million.

If/When the Chiefs release him, again, that's when Watkins might make some sense.