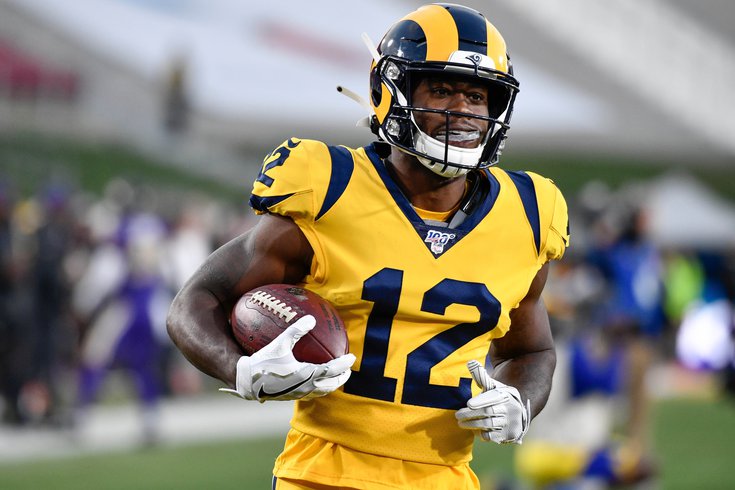 Welcome back for another week of NFL free agency and trade rumors after making it through the weekend stuck inside (again). And yes, we're still talking about the Eagles — specifically their continuing need at wide receiver, something that's been a glaring weakness since before last season even ended.

Throughout this process, it seems like every time we write about a wideout, that player winds up signing somewhere else. Hell, it happened to us FOUR TIMES in the same day last week. A week earlier, it happened three times in the same day. But as Jimmy Kempski wrote on Monday morning, wide receiver is still the No. 1 need for the Birds, and their apparent strategy of waiting for the draft and letting the free agents sign elsewhere isn't a sound one.

The Eagles had the worst wide receiving corps in the NFL a season ago (like they did in 2016), and they did nothing to fix it at all in free agency, opting (for now, anyway) to solve that position in the draft. Barring a trade for a starting-level wide receiver, it's hard to imagine how this can be the Eagles' strategy, seeing as there are major question marks with every single receiver on the current roster. ...

The 2020 draft is loaded with wide receiver talent, but rookies are far from a sure thing, and a shortened offseason could make it very difficult for young players to learn a new offense at a position where it's already difficult to make an early impact.

Last week, Jimmy wrote even more about why this strategy is likely to backfire on Howie Roseman and Co., especially with their history of drafting receivers.

Enter Brandin Cooks, who had previously been listed as a candidate to be traded nearly two weeks ago, right when the NFL's free agent tampering period had opened, and the asking price was reportedly lower than what Cooks had been traded for in the past. But in the weeks since, there hasn't been a ton of noise, other than the noise Cooks has created himself on Twitter:

Now, it's looking more and more like the speedy wideout is following the Stefon Diggs playbook and trying to work his way out of Los Angeles. Of course, with most of us feeling locked in our homes like prisoners as we self-quarantine, maybe Cooks' tweet wasn't so cryptic after all.

According to Peter King of ProFootballTalk, Cooks currently isn't on the block, but it's hard to imagine he can't be had for the right price. And, as King sees it, the Eagles would be among the teams that make the most sense for Cooks should the Rams actually pull the trigger and trade him.

After an earlier version of this note ran, I was told by two sources that Cooks is not on the block. If that changes, it would continue one of the oddest careers of a very good player ever. ...

My best landing spots for Cooks, if the Rams would entertain a deal, would be Philadelphia, Green Bay, Oakland or Washington. Of course, the strength of the receiver group in this draft will affect any of those teams’ willingness to pursue Cooks.

Amazing, really, that one player, at 26, has already been worth the 20th, 32nd and 23rd picks in three different drafts.  [nbcsports.com]

Would the Eagles really be willing to go for a player so similar in skillset to DeSean Jackson when they already have a considerable amount of money tied up in the position? Or are they worried enough about the health of their current receivers that they'd be willing to bring in a high-priced insurance policy who is under contract for the next four years with an average cap hit of $17.5 million? Not to mention a guy who we've all seen die on the football field...

That all depends on what Cooks would cost in a trade, but given his cap hit and that he's coming off a down season in 2019, he's likely not going to cost anything like what he's cost in the past (read: a first-round pick). But with two high-priced receivers already on the roster, it's likely to be that cap hit — and not what they'd have to give up in terms of draft compensation — that would really be the killer for the Eagles.

Still, despite his dip in production last season, Cooks had posted at least 1,000 yards in each of the previous four seasons — and did so with three different quarterbacks in three different systems — all while appearing in all 16 games each of those seasons. He can also stretch the field while still hauling in his fair share of receptions. Over that four year stretch from 2015-2018, Cooks averaged 77 receptions, 1,150 yards and 7.3 touchdowns per season, so perhaps a change in scenario could erase a less-than stellar 2019 season that saw him catch just 42 passes for 583 yards and two touchdowns.

Either way, the simple fact that we wrote about him likely means he'll be traded (to someone other than the Eagles) today. So stay tuned to all the latest NFL trade rumors and free agency news in our live tracker...