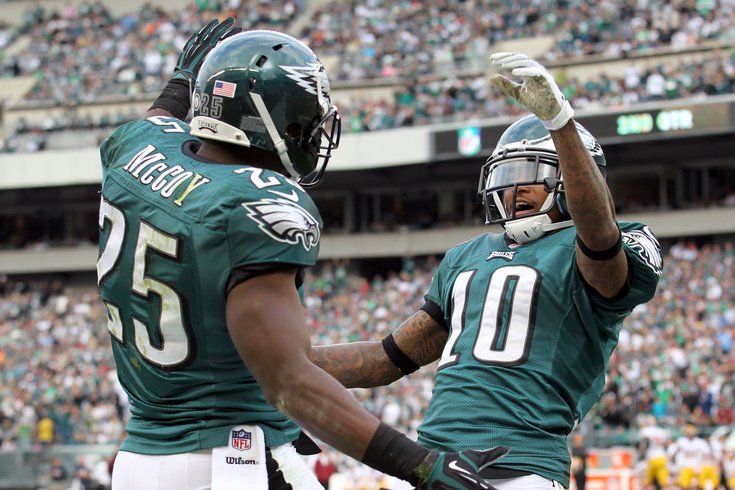 Could LeSean McCoy and DeSean Jackson be reunited in Philly?

Former Philadelphia Eagles running back LeSean McCoy, who was abruptly traded to Buffalo back in 2015 by then-coach Chip Kelly, is now a free agent after winning a Super Bowl with the Chiefs last season. And on Friday afternoon, the Birds all-time leading rusher made it pretty clear on his Instagram that he'd welcome a return to Philly.

LeSean McCoy is a free agent.
He will be 32 in July

Yes, that's former teammate DeSean Jackson, who made his own return to the Eagles last season, in the comments calling for a reunion with Shady.

Coincidentally, the Eagles could be in the market for a veteran running back after letting Jordan Howard go to the Dolphins in free agency. Currently, they have Miles Sanders, Boston Scott and Elijah Holyfield, with the last two spending the majority of the 2019 season on the practice squad. And while Scott showed his skills down the stretch after Howard went down, it wouldn't be at all surprising if Howie Roseman wanted to use some of the Birds remaining salary cap space on a veteran running back.

There are, however, some things working against McCoy, who will be 32 by the time training camps open in July (if they open at all). In recent years, the Harrisburg native has seen his production trail off as he's found it harder to stay on the field. Over the last two seasons, McCoy has fewer than 1,000 rushing yards combined after finishing six of his previous eight seasons with over 1,000 yards each.

That, however, had more to do with the veteran back taking on a lesser role, and in Kansas City, reunited with former Eagles coach Andy Reid, Shady looked slightly more like his old self. In 2019, he averaged 4.6 yards per rush (on 101 carries) in a shared role, his highest average since 2016, and finished with 646 yards from scrimmage and five touchdowns.

So, for the Eagles, what it really comes down to this: What exactly do you need McCoy to be for you? And is his asking price reflective of the role you need him to fill?

If that answer to that first question is something like 100 carries and the ability to spell Sanders in spots, then he might be your guy. And if he's asking for, let's say, a one-year contract that's fitting for an aging backup running back or perhaps even a hometown discount — and not asking to be paid based on his past accomplishments in Philadelphia — then he's definitely worth a look for the Eagles.

After all, it would be nice for him to finish his career in Philly, maybe add a few yards to his franchise record, and then retire an Eagle.