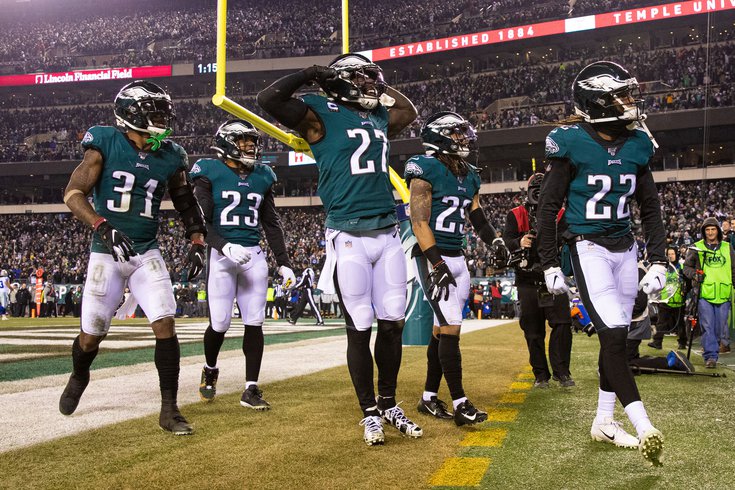 The Eagles' secondary will look different in 2020.

Philadelphia Eagles general manager Howie Roseman spoke with reporters for almost an hour on Thursday, and as you might imagine, he was asked quite a few questions about the secondary, seeing as almost every member of it has been in the news over the last week and a half.

First, Roseman pointed out that he saw what you all saw -- that the defense gave up way too many big plays last season.

"Like all of you, you’re watching it, I’m watching it, and we’re seeing the effect that has, and the first way that we want to improve that is up front and affecting the quarterback, because these guys are so good in the National Football League, that if you don’t get pressure on them, nobody’s going to be able to cover for a long period of time anyway, no matter how good your secondary is.

"So we wanted to really combine the front end and the back end, that was really our priority, by getting Hargrave and adding him to our d-line, it allows us also to utilize other guys in different situations."

Yes, the pass rush is certainly important. Moving forward, let's look at each position in the secondary, decoding Roseman, and determining where each player fits in.

Any moron would know that Slay is the Eagles' CB1, but here's what Roseman said anyway.

"The big move for us obviously was the Darius Slay trade, and extension. This is a guy that we feel like we really know well. One, we did a lot of work with him coming out. But him and Javon Hargrave were two guys that were the two guys we were looking at specific spots during the draft. We were down to two guys and were making a decision on two guys. (Note: The Eagles selected Zach Ertz one spot ahead of Slay in 2013, and Isaac Seumalo ahead of Hargrave in 2016.)

"This is a guy who can get the ball back for out offense. He's really been in a situation in which he's been left on an island. He's 29 years old. Getting the contract extension done was important to us as well. We're really excited about bringing him in, and helping our team. And what we did up front, the defensive line, we really think that'll help our back end as well. It all starts up front for how we want to build it."

MORE: Slay's contract is much more team-friendly than originally reported

A number of fans believe that Sidney Jones is the odds-on favorites to start at CB2 this season. No way. Maddox started at outside corner for the Eagles at the end of the season, including the playoffs, while Jones didn't get a single defensive snap against the Seahawks. (More on him in a few.)

Roseman's comments show that the Eagles are very high on Maddox, and they believe he can be a full-time outside corner.

Cre'Von LeBlanc was not mentioned, and while he is a good slot corner himself, Robey-Coleman is the far more experienced corner, and probably a better player, so you can go ahead an pencil him in as the starting slot corner.

"This is a guy that we've admired from afar. We've admired his mentality. He's explosive. He's quick-twitched, he's extremely competitive. Obviously, again, he was with Jim in Buffalo. He was also with our new director of performance, Ted Rath, in L.A., so we got really good insight into how this player works, what are the tools that he has in his body, and we really feel like he's a guy who can provide sticky coverage in the slot and we were excited about getting him as we continue this free agent process."

Roseman's comments on Mills clearly paint a picture of the Jenkins role in the Eagles' scheme.

"Jalen Mills, bringing him back was important for us. We feel like Jalen is a positionless player. He can really play down in the box, he can cover tight ends, he can cover slot receivers, he can play out wide, he’s got range, he’s played the position before. When we scouted him, he played the safety position against Alabama in a huge game for LSU, so we’ve seen him do that. His versatility, his mentality, is something we wanted to keep on the defensive side of the ball."

Roseman was also asked about Jenkins, of course.

"The hardest part of this job is the fact that you have to make tough decisions, and you gotta figure out where you're gonna do that. When you have people and players who have given the team so much, and really the city so much, and me personally so much, these are hard things to do. We're trying to balance what we can do this year and what we can do going forward.

"In terms of Malcolm, yeah, I agree. He did the deal in the place that ... besides us, was the only place he really would have done that. I think it's just the nature of where we are right now as a sport. You see it with Hall of Fame players going, leaving their teams, quarterback, tight end -- you just see it. You can't sign everyone. For us, we had to make some decisions. We had conversations with his representative [Ben Dogra], and we understood what was important to him and what he was looking for, we were trying to also balance that with what we were trying to do in the offseason.

"At the end of the day, it's a very tough decision. I have no doubt that he's going to go somewhere and continue to play at a high level. But we're in a position with our team, we're going to have to lose some guys. We've seen it with teams in our division, as well, having to lose guys. It's just the nature of where we are."

"Rodney was really important for us to sign to have somebody who ... can really run the show back there, and another year removed from the ACL surgery. I think sometimes when you look at Rodney, he's always doing his job, he's always in the right place and we've been very fortunate to have him and we're excited about him and taking another step forward also with his leadership ability."

I'll respectfully disagree that McLeod is always in the right place, but whatever.

No. 3 safety: Will Parks

"Versatile guy. Another young guy, 25 years old, a guy that we saw him do a lot of the things that we're looking for a guy in that role to do, being able to play in the box, being able to cover tight ends, also having the experience to have some range and play in the back end, so we're excited about getting Will. We know his mentality, we know his passion for the game and we think he'll be a good addition for us."

And then there's Sidney Jones and Rasul Douglas

To begin, leading up to free agency, we stated repeatedly that having to go out and spend major resources on an outside corner was the penance for missing on Jones and Douglas in the draft, a sentiment that Roseman acknowledged fully.

“I’d say going back to 2017 – when you draft guys in the second and third round and you’re now in the fourth year, you obviously want them to contribute. If they don’t contribute, then you’re dealing with a situation where you have to go outside the organization. Let’s be honest. Let’s call a spade a spade. There’s no doubt about it."

Roseman did sort of throw an excuse Jones' way, however.

"I think when we were looking at those guys coming out, just talking about Sidney, we knew the talent level Sidney had shown in college, and we also knew that he was dealing with an injury, and that we were taking a chance on a guy that had to recover. And we felt like if we redshirted him we could get him back to where that was. And we’ve seen flashes of it. But we got to get more consistent with it and I think that Sidney knows that this is a pivotal year for him, pivotal offseason because even last year he was rehabbing from something. That’s big for him."

He made no such attempts to provide any excuses for Douglas.

"And I think that Jim would probably be a better person to talk to about this. I think that gives you more flexibly. Just as the game has evolved I think that, for us, it has also evolved. I think that you saw us playing more with three safeties the last couple of years, and also having safeties who have some corner backgrounds, like Jalen does. I think you got to constantly evolve and try to look at some of the things you’ve done and try to learn from them and try to be better because you know that you’re not going to be 100 percent, unfortunately.”

Translation: Jones will be back. See ya, Rasul.