So the Eagles just aren't going to address wide receiver in free agency? 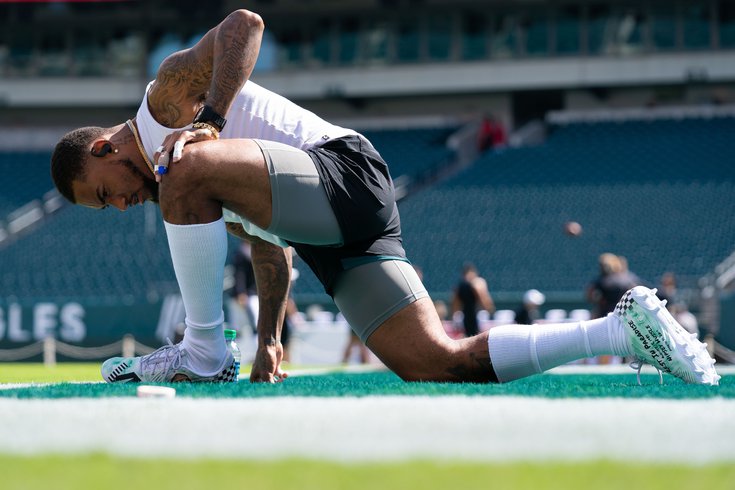 Relying on DeSean Jackson to stay healthy can't be part of the Eagles' plan at receiver this offseason, can it?

Entering free agency, it seemed like a pretty obvious bet that cornerback and wide receiver were the two positions that the Philadelphia Eagles absolutely had to address in free agency.

We're now nine days into spending season, and somehow, not a single receiver has been added. That is a huge surprise.

The Eagles' three leading receivers in 2019 were a pair of tight ends and a running back. No wide receivers topped 500 yards, and the top three receivers all missed significant time due to injury. A look at the receivers on the roster heading into free agency:

• Alshon Jeffery: Beyond the repeated cowardly anonymous sniping at the quarterback over a multi-year span, Jeffery looked cooked at times in 2019, and now he has a serious foot injury to rehab from on top of it.

• DeSean Jackson: Jackson played in one game (he was great in it), and while it was predictable that he would miss time at some point during the season, his unavailability was obviously a major disappointment. He cannot be counted on to stay healthy for long stretches at this point in his career.

• Nelson Agholor: Agholor reverted back to the form he showed in his first two seasons in the NFL, when he was nearly unanimously labeled a bust. He had bad drops in high-leverage situations, became something of a meme in Philly, and really just had to go find a fresh start elsewhere.

• J.J. Arcega-Whiteside: Arcega-Whiteside was bad as a rookie, costing the Eagles a game against the Lions Week 3 when he dropped what should have been a game-winning touchdown. In the playoff game against the Seahawks, he got less playing time than Greg Ward, Robert Davis, and Deontay Burnett, while DK Metcalf, a player drafted after him, went off for seven catches for 160 yards, a TD, and the game-sealing play.

• Greg Ward: Ward gave the Eagles a spark down the stretch, despite being smaller and slower than their other receivers. He was a great story, and he played with heart, but it's still probably unwise for the team to view him as some kind of answer.

• And then there were a smattering of in-season or futures contract additions, like Davis, Burnett, Shelton Gibson, etc.

So in summary, an oft-injured, soon-to-be 34-year-old speed guy, a disappointing rookie, and a feel-good story lacking ideal size and athletic measurables are the only receivers that are likely to return in 2020.

They had to find at least one reliable veteran target for Carson Wentz in free agency, right?

To begin, there were a couple trades that were made:

• The Texans traded DeAndre Hopkins and a 2020 fourth-round pick to the Cardinals for RB David Johnson, a 2020 second-round pick, and a 2021 fourth-round pick. I think that when most who follow the NFL closely saw the details of that trade, the immediate reaction was something like, "That can't be right."

Part of the reason that the Texans dealt Hopkins for 10 cents on the dollar was because he wanted a new contract, despite having three years left on his deal.

As far as Hopkins' fit with the Eagles, well, that's pretty simple. The Eagles desperately need a wide receiver who can make plays for Wentz, and Hopkins is a top 5 receiver in the NFL. Boom. That was easy.

The Eagles don't like setting the precedent of ripping up contracts that have as much time as Hopkins had left on his. The theory is that the other good veterans on the team will see that and might expect the same. However, this felt more like a situation in which part of the trade was to also do a new deal, which would not apply to other veterans already on the roster. It would have been the Texans setting the bad precedent of trading a player unhappy with his contract, not the Eagles for acquiring him and giving him a new contract as part of the deal.

In the end, the Cardinals got an outstanding player for an extremely low cost that the Eagles could have easily beaten, unless the Texans really, realllllly wanted the overpaid, and probably cooked David Johnson, which I guess is possible.

And the free agents:

• Amari Cooper: Cooper signed a $20 million/year deal to stay in Dallas, despite reportedly having a significantly better offer from Washington. It seemed pretty clear Cooper wanted to stay in Dallas all along, and I can't fault the Eagles for not spending on him.

• Robby Anderson: Anderson, who is still only 27, will sign a two-year, $20 million deal with the Panthers. He would have solved the speed element in the Eagles' offense, and $10 million/year felt like a reasonable price.

• Randall Cobb: The Cowboys' slot receiver left for the aforementioned Texans on a $9 million/year deal. He's 30, and a slot receiver. Again, Cobb was not a realistic Eagles target.

• Emmanuel Sanders: Sanders signed a two-year deal in New Orleans worth $8 million/year. Sanders made an impact for the Niners down the stretch last year, but he is 33, so he does not fit with the Eagles (rightful) desire to get younger.

• Breshad Perriman: Perriman signed a one-year deal worth "up to" $8 million. He has had a disappointing career, but he's till young and his arrow seems to be pointing up. He has 4.24 speed, which at a minimum, opposing defenses have to respect. Maybe the Eagles are just relying on Jackson to stay healthy again in 2020?

Ultimately, the wide receivers in free agency did not get crazy money this offseason. Every deal above feels reasonable. So is there anything left? Nope. Basically just a smattering of backup-level players.

The Eagles' only potentially impactful wide receiver additions will come via the draft this offseason?

Well, yeah. They could still certainly trade for a receiver, but that will likely cost draft capital anyway, or they could sign a backup-level player, which they already have plenty of on the roster.

Even in a draft class that is absolutely loaded with wide receiver talent, there is no shortage of reasons why that could be problematic:

• The rest of the NFL knows you want receivers in the draft. If you try to trade up, smart teams in front of you should smell blood, and ask for bigger returns than normal in a trade. Meanwhile, teams behind you know they have to trade ahead of you to get a receiver they may like.

• This strategy goes against the Eagles' previous thinking that receivers don't often make big impacts in their rookie seasons. And they should know.

Jackson made an impact as a rookie, catching 62 passes for 912 yards and 2 TDs. Since Jackson, here are the Eagles' drafted receivers and what they did their rookie seasons:

Matthews was the most productive, as you can see, though he was artificially aided by Chip Kelly's nonsense offense that added a few extra drives per game for both teams.

In the case of the 2020 NFL season, the NFL is unlikely to hold spring rookie camps, OTAs, or full-team minicamps due to the Coronavirus outbreak. We'll see if training camp is affected. It's pretty easy to predict that immediate rookie production will be affected by the global pandemic we're all facing.

• The Eagles are currently picking 21st in this draft, which isn't an ideal spot, because the consensus top 3 receivers available -- Oklahoma's CeeDee Lamb, as well as Alabama's Henry Ruggs and Jerry Juedy -- are all likely to be gone. Trading up, as noted above, could become extra costly.

There should be plenty of good "next tier" prospects available at 21, who some might consider reaches at that spot.

• Whoever they do draft is going to be expected to produce immediately. After watching Wentz have to deal with arguably the worst receiving corps in the league in two of his first four seasons, the Philly fan base isn't going to be very patient. They are going to want results, and quickly, or the drafted players are going to turn on the radio and hear Frank from Blue Bell screaming about how much they suck.

Agholor certainly heard the criticism early in his career, and I'm sure Arcega-Whiteside did as well. The presence of reliable veteran receivers would shield the incoming rookies from a lot of that, allowing them to come along at an appropriate pace, rather than being thrown to the wolves.