And a move the Birds made on Wednesday could make a trade even more likely... 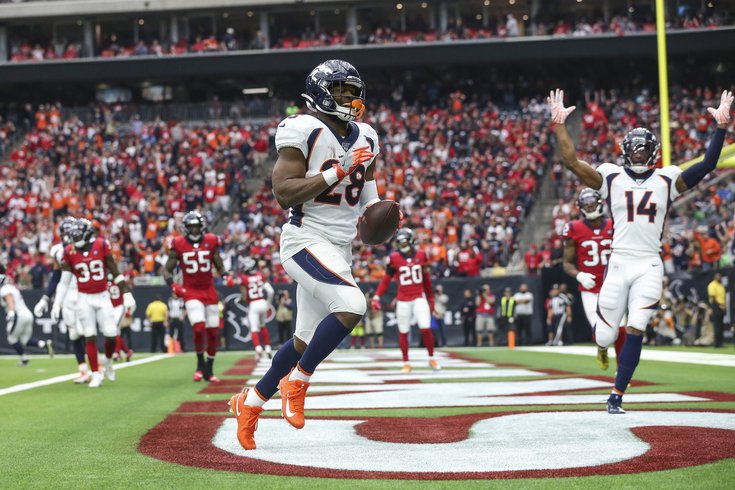 Denver Broncos running back Royce Freeman scores a touchdown during the second quarter against the Houston Texans at NRG Stadium.

UPDATE [1:15 p.m.] — According to Josina Anderson, the Eagles have reportedly agreed to a one-year deal with cornerback Nickell Robey-Coleman, who was with Rams for the last three seasons after spending the first four years of his career in Buffalo.

CB Nickell Robey-Coleman just text me he is going to the #Eagles on a 1-year deal.

Robey-Coleman, 28, will likely an option in the slot for the Eagles, and his addition may make it easier for the team to part ways with someone like Rasul Douglas, perhaps as part of a trade to bring in a running back or wide receiver (more on that below).

You can read more on the newest Eagles, here.

NFL free agency continues to roll on, and the Eagles continue to move forward without any upgrades on offense despite losing two offensive lineman, a running back and their starting slot receiver — and uncertainty surrounding the future of Alshon Jeffery, who might not be ready for the start of the season even if he's still in Philly next season.

And as we saw on Tuesday, the Eagles are going to need to act fast if they want to shore up either of those last two positions via free agency. Four relatively cheap (for the most part) wide receivers, all of whom made sense for the Birds, came off the board in one day: Breshad Perriman, Robby Anderson, Phillip Dorsett, and Devin Funchess all signed with new teams in the span of a few hours.

Now, the Eagles are going to be left scrambling if they hope to upgrade that position before the draft — and as our own Jimmy Kempski wrote on Wednesday morning, waiting until the draft is probably not the best of ideas. The same can be said for running back, although with Miles Sanders on the rise, it might make sense for the Birds to bring in a veteran back to spell the Rookie of the Year candidate from last season.

And if they can't get it done in free agency, perhaps Howie Roseman and Co. would have better luck on the trade market.

In light of the recent news surrounding Rasul Douglas being on the trade block after the Eagles traded for Darius Slay and re-signed both Jalen Mills and Rodney McLeod — they also brought in Will Parks from the Broncos — to solidify the safety position, perhaps shopping Douglas for an offensive upgrade makes the most sense.

Over at NJ.com, Mike Kaye wrote about just that, and proposed three trade scenarios that would bring the Eagles some offensive weapons in exchange for a guy who recently became expendable. Here's one of the three scenarios — you'll have to click over to Mike's story to see the others.

The Broncos decided to upgrade their running back group during the first week of free agency, signing former Pro Bowl tailback Melvin Gordon to a two-year deal. With the Broncos likely to lean on Gordon moving forward, Phillip Lindsay and Royce Freeman could become expendable, similarly to Douglas in Philadelphia.

While the Broncos just traded for cornerback A.J. Bouye to take over for the departing Chris Harris, the team could use more competition at the No. 2 spot. Douglas could compete with former teammate De’Vante Bausby for the job opposite Bouye.

In return, the Eagles could add a replacement for Jordan Howard in Freeman, who would then form a strong trio with Miles Sanders and Boston Scott in the Philadelphia backfield.  [nj.com]

Mike also points out that Freeman has a few connections to current members of the Eagles coaching staff, including senior offensive assistant Rich Scangarello, who was the offensive coordinator in Denver last season. He also previously worked with assistant running backs coach T.J. Paganetti when the two were both at Oregon.

Last season, Freeman ran for 496 yards and three touchdowns, and added 43 receptions for 256 yards and a score, while splitting time with Phillip Lindsay. Those receiving numbers were a huge improvement on his rookie campaign (when he caught just 14 passes for 72 yards), and are likely a product of just one year of work with Scangarello.

The Eagles seem to value versatility among their running backs, and Freeman's skillset might make a nice compliment to Miles Sanders and Boston Scott, as he could provide some relief without the team really missing much of a beat.

Will the Eagles try to upgrade their offensive skill positions via trade? They seem to have the ammo to do so if they stick to reasonably-priced targets — and after seeing so many players go off the board on Tuesday, they likely also have the motivation to get something done.

Stay tuned for all the latest offseason news and rumors from around the NFL right here in our live tracker.