Mailbag: Should the Eagles trade a 1st round pick for Yannick Ngakoue? 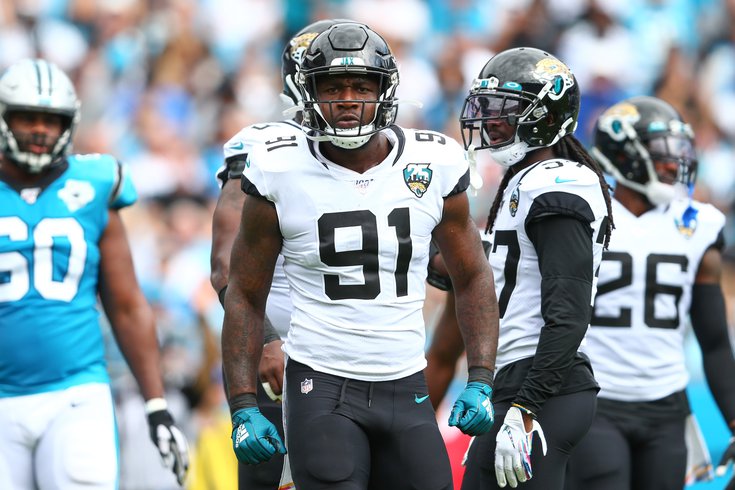 Trading for Yannick Ngakoue is not a realistic option for the Eagles.

In our Eagles chat on Monday, there were a lot of questions that we could not get to in time or other questions we did answer but could use more color. And so, let's do a mailbag post to answer some of the overflow.

Question from Yannick Ngakoue: Jimmy, if you were Howie Roseman would you trade your 1 for me?

No. I probably wouldn't even trade a 2. Let's go pro/con here.

• He plays a premium position, and has been a productive pass rusher from Day 1 in the NFL, racking up 37.5 sacks in four season.

• He's durable. He has only missed one game over his career.

So those are some pretty good arguments.

• The Eagles have only made 10 picks in the last 2 years combined, which is tied for the lowest total in the NFL. Before the Darius Slay trade, they had 10 picks, and now they're down to 8 (trust me, I did the math). If they trade their first-round pick, they'll only have two picks in the first two days of the draft. They would be pick No. 53, and No. 103, which is the comp pick earned for losing Nick Foles, and is actually the 39th pick in the third round.

• Ngakoue got franchise tagged, and is scheduled to make $17,788,000 in 2020. Surely the Eagles would not trade a 1 or a 2 for a player they haven't also done a deal with in advance. So what will the cost for a new contract be? Dante Fowler, a far less productive player who played in the same scheme as Ngakoue, just signed a $15 million/year deal. Ngakoue should be asking for something closer to $20 million/year.

• No matter what you or I may think of Brandon Graham and Derek Barnett as an edge-rushing duo, the Eagles love them.

Conclusion: Sure, Ngakoue would be a nice addition. He's a very good player, who would certainly make a difference, but we're not talking about, saayyyy, a Khalil Mack-type player here. Given the Eagles' lack of good, early-20's players, their cap challenges in 2021, and their severe needs at other positions like wide receiver, it's just not a realistic idea.

I think that running back is a very under-the-radar need for the Eagles this offseason. I mean, they currently only have three on the roster (Miles Sanders, Boston Scott, and Holyfield), and I wouldn't exactly consider Holyfield a lock to make the team.

They typically roster four (sometimes five) backs, and every year, they see a few of them get hurt. In 2019, for example, the Eagles missed a combined 31 games from Darren Sproles, Corey Clement, and Jordan Howard.

When Howard and Sanders were both playing well, they were a good complementary duo, as Howard got tough yards inside, while Sanders was more of a dynamic speed threat. I believe they could really use an inside banger to replace Howard. Maybe that's Holyfield, maybe not. Even if you think Holyfield could be that guy, they still need a fourth back anyway. We'll see if they take one on Day 3 as you noted, or if they make that an undrafted free agent priority, where they've actually had some success. I would draft one if the value is right.

Question from Sporran: In the NFC East, who is potentially hurt the most if off-season workouts (and OTAs, minicamps, etc.) are canceled?

The Eagles have had Doug Pederson running the offense and Jim Schwartz running their defense for four full years now, which, in case you missed it, included a Super Bowl run, and a pair of other playoff appearances. Meanwhile, the Cowboys, Giants, and Washington team all have new coaching staffs.

• Cowboys: They still have plenty of talented players, an experienced head coach, and a quarterback heading into his fifth year as the starter.

• Washington team: They hired an experienced head coach as well, but they have a second-year quarterback who only started seven games in 2019, and looked like a work in progress.

Question from Deez Nuts: Why were the Eagles not in on any major free agent linebacker? Do they think that much of Nate Gerry and T.J. Edwards? It seemed like a need to fill in free agency after cutting Nigel Bradham and losing Kamu. Jatavis Brown seems like a special teams / depth signing, right?

The linebacker market got surprisingly expensive this offseason:

Of the above players, I could maybe make a case for Littleton at a little under $12 million/year, or Kwiatkoski at $7 million, but even both of those options were pricey.

You have to go cheap somewhere, and the Eagles have shown over and over again that linebacker is the spot they've identified as the position to do that.

They did add Brown, and yes, I too would pencil him in as a depth / special teams guy, though I do think the Eagles will draft one this year, most likely on Day 3.

Question from Katie: What are your top 5 social distancing sports?