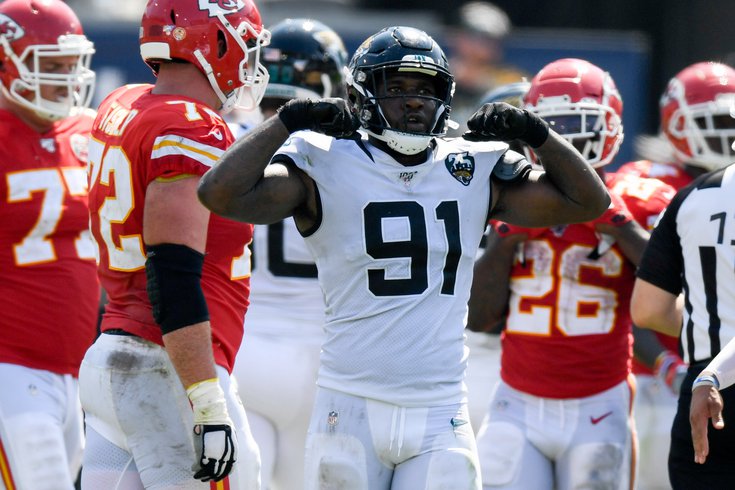 We're now one week removed from the unofficial start to NFL free agency, although it likely feels like it's been much longer given the added stress of being confined to one's house amid a spreading pandemic.

And even though it started slowly, it ended up being a rather busy week for the Eagles, who traded for a Pro Bowl cornerback in Darius Slay, signed a solid defensive tackle in Javon Hargrave, and made several other moves that included re-signing Jalen Mills and Rodney McLeod, as well as bringing in safety Will Parks and linebacker Jatavis Brown.

The one thing all those moves had in common? They were all on the defensive side of the ball, despite many believing that the Birds would go after a big-name wide receiver, especially if they were planning on parting ways with Alshon Jeffery. And the good news for Eagles fans hoping the team would land a free agent wideout is that there are still some names — several that have already been linked to Philly — as well as what is expected to be plenty of options in the first round of the draft, if they decide to go that route.

Even without adding a single thing on the offensive side of the ball, which we learned in 2019 wasn't as deep as we thought, the Eagles have still had a pretty solid showing in free agency. We'll have more on that, some options at wide receiver if the Eagles do decide to add there prior to the draft, and one more name on defense that could be their biggest move yet in today's edition of What They're Saying...

Over at B/R, Marcus Mosher provided six teams that he thought were the most improved teams in free agency so far this offseason. And, somewhat surprisingly, he had the Eagles listed right there with teams like the Dolphins, Raiders and Cardinals, all teams that had plenty of room for improvement after missing the playoffs last season.

Here's what Mosher had to say about the Birds:

Entering free agency, the Philadelphia Eagles didn't have many needs. They had to address their cornerback situation as well as their wide receiver corps, but the latter could be filled in the draft. The Eagles then nabbed one of the market's best cornerbacks in Darius Slay, acquiring him from Detroit for third- and fifth-round picks and signing him to a three-year, $50 million contract extension.

Slay gives the Eagles a No. 1 corner who can follow and shut down some of the NFL's best receivers. While they need to continue to address the position with depth, the All-Pro can cover a lot of holes. But Slay wasn't Philly's only big addition.

The Eagles signed veteran defensive tackle Javon Hargrave, formerly of the Pittsburgh Steelers, to a three-year, $39 million deal. While Hargrave isn't an elite sack artist, he is one of the NFL's toughest nose tackles to block, as he has elite speed and quickness for the position. He should dominate against the run and help push Fletcher Cox into more one-on-one matchups.

The Eagles still have eight picks and more cap space, but they have already added two elite defenders. Look for both Slay and Hargrave to have big seasons.  [bleacherreport.com]

Pick up the receiver?

There are still plenty of free agents out there that remain unsigned, and several wide receivers that could be lower-cost options for the Eagles. One of those available players is Breshad Perriman, who had a solid year for the Bucs. And Jeff Kerr and Jordan Dajani picked Philly as one of the top landing spots for Perriman.

Perriman is an underrated commodity and will be an excellent get for any team. 2019 was the year Perriman finally put everything together, finishing with 17.9 yards per catch (36 catches, 645 yards) and six touchdowns.

Put Perriman with a quarterback that can throw the ball downfield and he adds instant explosiveness to an offense. The Eagles need to add speed to their wide receiver group.

Over at NBC Sports Philadelphia, Dave Zangaro listed 13 free agents that are still available to the Eagles. And, unsurprisingly, the first four were all wideouts. Perriman was the first name listed, but here's a look at two speedy receivers who would also make sense — and have both previously been linked to the Birds this offseason.

He might not be the most attractive option but he’s young and fast and likely cheaper than others. In 2019, Robinson caught 32 passes for 449 yards and four touchdowns with the Chiefs, who were stacked on offense. There was some smoke around Robinson and the Eagles and as a low-cost option, this would make some sense.

The Temple product is the best receiver left on the market but the 26-year-old won’t be cheap. The speedy receiver is a proven deep threat in the NFL. In 2019, he caught 52 passes for 779 yards and five touchdowns. He might be out of the Eagles’ price range.  [nbcsports.com]

Does Yannick want to be in Philly?

In case you missed it over the last week, Jaguars defensive end Yannick Ngakoue was hit with the franchise tag, but still desperately wants out of Jacksonville. Of course, acquiring him would cost the Eagles and they've already added to their defensive front this offseason, but Derek Barnett comes off the books after this season and Ngakoue is only nine months older. And since free agency has opened, Ngakoue's taken to social media to drop some not-so-subtle hints that he'd love to play in Philly.

First, he liked some tweets that mentioned him as a good fit for the Eagles. He shared a post with an eagle emoji. He had another one with Reggie White — and some with Trent Cole as well. There was one with a photo of a cheesesteak and the caption, "Need 1. Never had it." There was even one with the cover of  Lil' Uzi Vert's new album, although everyone's been streaming that so it could just be coincidence.

But when you put all that together, it's hard to imagine all of this is just one big coincidence. Here's what ESP had to say about what he thinks all those IG posts mean.

Verdict: Ngakoue is not from Philadelphia, didn’t go to college in the area and grew up a Pittsburgh Steelers fan. There is absolutely no doubt that Ngakoue is doing all this on social media because he either wants to be on the Eagles or knows the Eagles have interest. It very well could be both. Sure, at this point Ngakoue might still be doing it because he knows people are watching and notice. But he has no reason to troll Eagles’ fans out of nowhere. This started from something, and it almost certainly started from him wanting to come to Philadelphia or knowing there was a chance that is where he could end up.

If that is the case, it is hard to blame him, as Ngakoue would be great on an Eagles’ defensive line that lets their pass rushers run free at the quarterback. He would clearly enjoy playing in a city that lives-and-dies with its team and clearly wants him here. It would be a smart move for Ngakoue to want to be here, just like it would be a smart move for the Eagles to make it happen.

Which is why his social media activity is worth continuing to keep an eye on.