The Birds are reportedly still looking for a 'younger' receiver who will 'mesh' with Wentz, not a veteran 'with his own style' 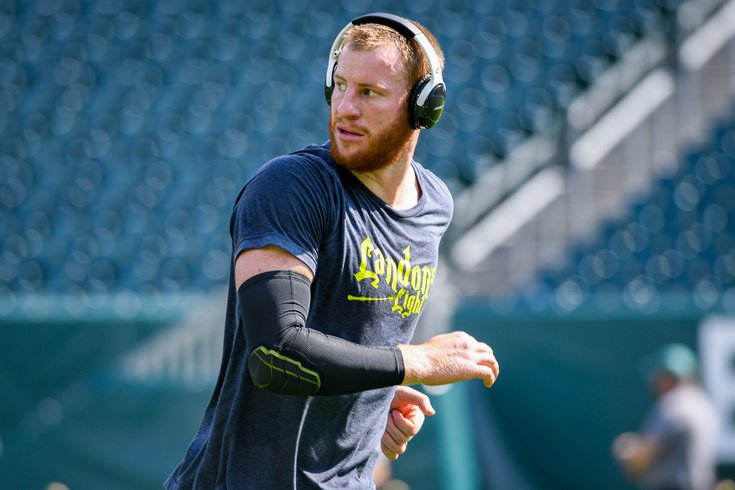 The Eagles may not have made any moves to improve their offense so far this offseason, but that doesn't mean quarterback Carson Wentz hasn't played a big role in the shaping of this team.

Last week, there was a story suggesting that the team cut ties with Malcolm Jenkins for reasons other than just his demands for a new contract, as NBC Sports' John Clark suggested part of their decision to move on from one of the heart and soul members of the team was to create a scenario in which Wentz was the default leader of the entire team, not just the offensive side of the ball.

Now, it appears, the Eagles are also trying to protect Wentz from a power struggle with a veteran wide receiver, which may explain why a team like the Birds — one that desperately needs help at the position with Alshon Jeffery's status still uncertain and DeSean Jackson's health being anything but dependable — have yet to make a move at the position this offseason, despite there being of plenty of talented receivers available.

Sure, they'll still have the draft to try to fill out their receiving corps, but as Jimmy Kempski outlined on Wednesday, putting all your eggs in the draft basket is a dumb strategy for a couple of reasons.

Over on ESPN, Jeremy Fowler wrote a story outlining all 32 teams' free agent hauls to this point and trying making sense of what moves may be left to make. And when it comes to the Eagles, his analysis doesn't paint a great picture of the leadership ability of a guy for whom they just essentially manufactured a leadership role.

Here's more from Fowler, with the most important part bolded:

The Eagles loaded up on defensive firepower with a Slay trade that didn't require much draft compensation to facilitate (third- and fifth-round picks) and a defensive tackle (Javon Hargrave) they believe will be a force in their attacking style of defense.

But a team that desperately needs receivers is sitting a few plays out in March, applying a lot of pressure to get it right in April.

After making dozens of calls on the receiver market in the last week, the belief is the Eagles want a younger player who will mesh with Carson Wentz rather than a veteran who might have his own style of play. They took a similar approach with the offensive staff, opting not to hire a playcaller from the outside. Philly is all-in on Wentz, obviously, so the pieces around him will be tailored accordingly.  [ESPN]

Given the stories coming out of the locker room over the past two years — from leaks that may or may not have been (but probably definitely were) coming from the team's star receiver to others questioning the Eagles quarterback's leadership abilities — it's a bit concerning that the team is now so proactive in protecting Wentz from his own teammates that it's preventing them from going after the top talent on the board. Actually, it's more than a bit concerning.

However, as we saw at the end of the season, Wentz can lead — especially on the field. Just look at what he was able to do with a bunch of practice squad players down the stretch. There's no question that he's able to get the best out of some players; unfortunately, it just always seems that those players are the ones who probably shouldn't be on an NFL field to begin with.

Then again, maybe the problem isn't Wentz. And if the team is afraid of bringing in a temperamental wideout — most of the best ones are — we may never find out the real answer. We never got to see how the dynamic between Wentz and Jackson would play out over a full season, so the only dynamic we have to go on is the one between Wentz and Alshon Jeffery. And it's easy to see why, based on that relationship, the Eagles may be hesitant.

At some point, however, they're going to need to be able to trust Wentz to control that locker room, no matter what veterans are in it. If they want Wentz to be the leader, they're going to need to let him be the leader. And as he enters his fifth season, you'd hope he's already at that point, but that doesn't appear to be the case just yet given what we've seen play out so far this offseason.

So, with so many receivers off the board already, the Birds may find themselves picking from the bottom of the barrel if they still opt to add a free agent wideout. They've already missed out on the chance to trade for the likes of DeAndre Hopkins and Stefon Diggs, and also missed out on signing lesser guys like Robby Anderson and Breshad Perriman. Now, there's not a ton left to work with, as you can clearly see in Pro Football Focus' list of the top 100 remaining free agents.

Here are the nine wideouts left in their top 100 overall after the first week-plus of free agency:

Other available wideouts include the Chiefs' Demarcus Robinson and old friend Jordan Matthews. And while none of those names probably get Eagles fans overly excited, it's also a safe bet that none will cause any issues with Wentz in the locker room.

So at least they'll have that going for them, which is nice.

But if the Eagles don't make a major upgrade — which seems pretty much impossible at this point unless they strike gold in the draft — and their wide receivers again struggle in 2020, this little nugget from an ESPN story in March could come back to haunt them. And their quarterback.