NFL free agency rumors: How much impact did Wentz have on Eagles' free agent moves? 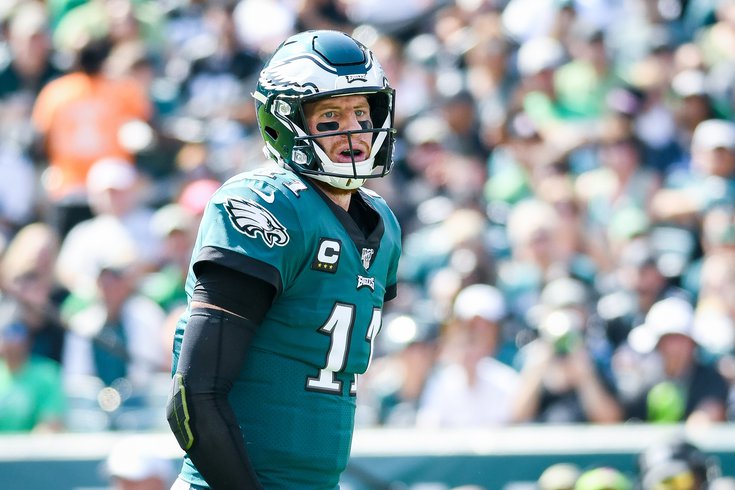 On Saturday afternoon, almost one right after the other, news broke regarding a trio of free agency moves involving the Eagles. Two of them were players coming to Philly — safety Will Parks and linebacker Jatavis Brown on one-year deals — and one was a player leaving the Eagles for the first time in his NFL career — wideout Nelson Agholor, who signed with the Raiders after an up-and-down career with the Birds.

After a slow start to free agency, the Eagles have suddenly become quite busy, making deals that include trading for Pro Bowl cornerback Darius Slay and releasing veteran leader and defensive captain Malcolm Jenkins. That last one turned a couple heads, as Jenkins has been not only a force on the field for the Birds, but also one of their vocal leaders in the locker room.

And while Jenkins did publicly state he wanted a new contract this offseason, it may actually have been his popularity and respect within the locker room that did him in, especially when you consider that his deal with the Saints, the team that drafted him back in 2009, was not all that much considering what Jenkins provides on the field.

Based on Jenkins' comments in his Players' Tribune article on Saturday, Jenkins didn't really want to leave Philly. So why did the Eagles feel the need to move on from him? Well, here's an interesting take on that decision from John Clark of NBC Sports Philadelphia.

But I think the biggest factor is changing the dynamic — turning this team over to their franchise quarterback Carson Wentz.

Jenkins was the leader. He was the voice of the team. He broke down the huddles. He was a very powerful voice in the locker room and a commanding and inspirational leader. He was fantastic. Helped lead the Eagles to the Super Bowl. And he was one of the main reasons why the Eagles made the playoffs the last two years. Remember when the Eagles were down 19-3 to the Giants in 2018? Season on the brink, staring at 4-7 and possibly missing the playoffs. Jenkins urged Jim Schwartz to simplify the defense for the secondary that had been ravaged by injuries (some players off the street). The Eagles came back and won that game, catapulting them into the playoffs.

But you saw what Wentz was able to do this past season when the offense was ravaged by injuries at receiver down the stretch. “Carson and the kids.” He led them to the playoffs. He was free to be the leader with the younger receivers. They say he inspired them.

I believe the decision to let Jenkins walk is about changing the overall dynamic of this team so this is Wentz’s locker room.  [nbcsports.com]

Could Wentz really be the reason Jenkins was let go? As Clark points out, this move is somewhat reminiscent of what the Seahawks did when they let Richard Sherman, Earl Thomas and Michael Bennett go in order to let Russell Wilson become the leader of the team.

Unfortunately, forcing someone to fit into a leadership position like that doesn't always work. Most often, the best leaders are the ones who take up that mantle on their own. And getting rid of a productive player just to give your quarterback space to feel like the leader, that might not be the smartest move — just ask the Seahawks, who haven't made it past the divisional round of the playoffs since propping up Wilson.

Sure, the Eagles made some moves at safety by signing Parks and re-inking Rodney McLeod — and have said that Jalen Mills will be moving from corner to safety, but none of those guys will be able to replicate the leadership that Jenkins showed both in the locker room and on the field.

Of course, the team is hoping that Wentz takes up that mantle, but there's something to be said about teams having leaders on both sides of the ball. And even if Wentz can handle the offensive side — his leadership down the stretch last season showed he's capable — they may still be left wanting on the defensive side of the ball.

In the meantime, the Eagles will continue looking to fill out their roster as NFL free agency continues. Be sure to follow the latest news and rumors in our live tracker: