Eagles like what they have at WR, Roseman says no more big moves 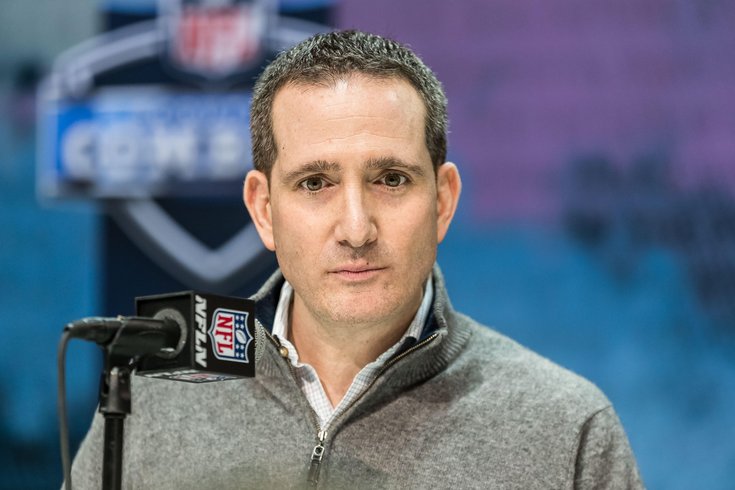 On Thursday, Eagles GM Howie Roseman spoke to reporters (via a socially distant conference call) and provided some insight into the team's offseason strategy and their potential remaining moves this offseason.

One of the big topics of interest among fans has been the team's lack of moves regarding bringing in a wide receiver, something many thought they would address in free agency, despite an historically deep group of wideouts in next month's draft.

Adding a veteran via free agency or trade just always seemed to make sense, both because getting your guy in the draft is hardly guaranteed and because even if you do, sometimes it takes receivers a year to find their stride after making the jump from college to the pros. Furthermore, by not upgrading the position in free agency, the Birds are essentially telegraphing their pick in the first round, which could make it harder for them to trade up if they have their sights set on one player specifically.

But, after hearing what Roseman had to say to reporters during his call, it's seeming less and less likely that the Eagles will be making a splash at the position prior to the draft — with all the top receivers already off the board, it would be pretty tough to make a splash now anyway.

Essentially, Roseman believes that the team views their current crop of wide receivers — the starters, for now, are DeSean Jackson, Alshon Jeffery (once he's healthy) and J.J. Arcega-Whiteside — in a higher regard than the public, which isn't very hard to imagine considering what the fanbase thinks of them after watching the 2019 season play out and the Eagles lose receiver after receiver to injury. And, with the small-sample-size exception of Jackson, it's not like they were playing all that well to begin with.

Howie Roseman says that the team views the WR position differently than the public. Doesn't mean that won't try to improve it, but they are higher on their receivers than (probably) you are.

And, despite all the off-field drama surrounding Jeffery, his massive contract, and the fact that he's reportedly the leak inside the locker room, Roseman seemed to offer him a vote of support on Thursday.

Howie: "Alshon knows what's being said about him... He's not living in a bubble."

Priority for Eagles and Alshon is for Alshon to get healthy, Howie says.

And when it comes to potentially trading for DeAndre Hopkins, Roseman said the cost for the Eagles to acquire him was going to be more than what the Cardinals wound up paying.

Roseman when asked why #Eagles were willing to give up picks for Darius Slay and not DeAndre Hopkins, alluded to Texans' demands being different than they were for Cards. "It's not apples to apples." Also said could do more with Slay's extension vs. possible one for Hopkins.

It certainly sounds like the Eagles are done adding receivers in free agency, although it wouldn't be a shocker if they made at least a smaller addition to add some depth prior to the draft. But no matter what moves they make, it doesn't seem like it's going to be anything splashy.

Howie Roseman pretty much says the Eagles are done making big moves in free agency. If they do anything else, it’ll be on the level of the Nickell Robey-Coleman addition.

Stay tuned right here for all the latest...