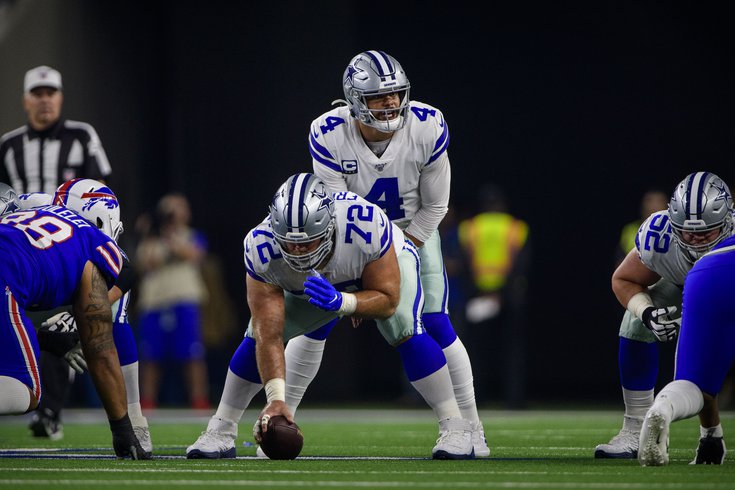 Dak Prescott is going to get PAID, and Travis Frederick is headed to retirement.

The Dallas Cowboys had an odd 2019 season. They stayed healthy, had an occasionally explosive offense, and should have easily won a very weak NFC East. Instead, they faltered, and faced a challenging offseason, with a slew of good players hitting the open market.

Here's what they did:

Over a 15-day stretch in August-September of 2019, the Cowboys handed out lucrative deals to a running back (Ezekiel Elliott), an off-ball linebacker (Jaylon Smith), and RT La'el Collins. Somehow those deals got done before more important players like Prescott, wide receiver Amari Cooper, and CB Byron Jones.

The lack of a deal for Prescott is almost certainly going to cost the Cowboys, bigly, going forward. While the Eagles and Rams were busy getting new deals done for Carson Wentz and Jared Goff for approximately $32 million per year, Prescott played well on his crappy rookie contract in 2019, and avoided injury, thus shifting leverage to his side of the bargaining table.

The Cowboys reportedly made a flimsy offer of $33 million per year (or maybe somewhat more?), which Prescott and agent Todd France rightfully turned down. Absent a new deal, Dallas was forced to slap Prescott with the franchise tag, which will cost them $30,509,000 in 2020.

Add it all up, and if Prescott gets three straight franchise tags, he'll make $119,839,352, or an average of just under $40 million per season. He has no reason to accept a deal that is at all close to the ones signed last year by Wentz or Goff, and the longer Prescott goes unsigned, the bigger the risk that a quarterback like Patrick Mahomes blows the roof off of the quarterback market when he is eligible for a new deal next offseason. That contract could be absurd.

The Cowboys have attempted to play the "You should take less money for the good of the team" game, and Prescott isn't having it. Ed Werder is reporting that Prescott will emerge as the highest-paid player in the NFL.

A source on #Cowboys negotiations with QB Dak Prescott wouldn’t describe a contract resolution as close but said discussions not contentious and Prescott will emerge as highest-paid NFL player. Fact April 6 offseason start postponed is factor in that it eliminated team deadline.

A $20 million/year deal looks like a lot of money, and certainly, it is, but I think the Cowboys actually made out OK here, or at least it could have been a lot worse. Like with Prescott above, it is odd that it even came to the point that Cooper got to test the open market, while other far less important players got their deals done first.

By hitting the open market, other teams had an opportunity to overpay for Cooper, and the Washington team reportedly tried.

Cowboys WR Amari Cooper turned down “significantly” more money from Redskins to remain in Dallas with hopes to win Super Bowl here, source said tonight. Dallas is where he wanted to be. He’s coming back on a five-year, $100 million contract.

At $20 million per year, Cooper is now the second-highest paid wide receiver in the NFL. He helped turn a struggling Cowboys team around upon his arrival in 2018, and the offense was not as potent while Cooper was clearly slowed while playing through injuries late in the season in 2019. He has been an extraordinarily important piece in the Cowboys' offense, and Dallas absolutely had to retain him, which they did.

Jarwin is an up-and-coming tight end, and he'll have more opportunities with Jason Witten out of the way, but 4 years, $22 million is a lot of money for a player with 672 career receiving yards.

Brown has mostly been the Cowboys' slot corner, but he has also played some outside. They probably overpaid a bit here, but had to because of the loss of Byron Jones.

In something of a surprise move, Lee returned to Dallas, despite a pair of starters in Leighton Vander Esch and Jaylon Smith ahead of him on the depth chart. His $4.5 million on the cap in 2020 is a hefty amount for a backup linebacker. It's actually the 11th-highest cap number on the team, presently.

We'll see if the Cowboys draft a center super-early out of need. Otherwise, pencil in Looney as the Week 1 starter after after Travis Frederick's retirement.

McCoy is still a good player, but he is now 32 years old, and not the near-elite player he once was. McCoy has had at least 5 sacks in each of the last 7 seasons, though his numbers have consistently been on the downswing over that period.

Poe is a massive 6'3, 346-pound defensive tackle heading into his ninth season. 20.5 career sacks, 4 last season. It makes sense for the Cowboys to add a massive run stopper on the interior to eat up space and let their linebackers behind him make plays.

They replaced one bad tackling safety in Jeff Heath for another one in Clinton-Dix. It's not a great sign when a player is on his fourth team in a span of under 17 months.

Canady is an inside-outside versatility depth signing. He got cut by the Ravens in-season last year and picked up by the Jets.

Because they lost so many big-money free agents (below), the Cowboys are in line for some 2021 compensatory picks. They are currently projected by OverTheCap to receive a 3, a 4, a 5, and a 6.

Frederick has been the starting center for the Cowboys since they drafted him in the first round of the 2013 NFL Draft, racking up 96 starts along the way. He missed the entire 2018 season with a rare disease, but returned in 2019.

In six years in the league, he has three All-Pro nods (one first-team, two second-team), and five Pro Bowl appearances. His loss could trigger the Cowboys to feel the need to select a center on Day 1 or Day 2 of the 2020 NFL Draft.

Because the Cowboys were forced to lay out huge financial investments to retain Prescott and Cooper, Jones was able to hit the open market, and he landed a $16.5 million/year deal with the Dolphins.

Jones was easily the Cowboys' best and most reliable defensive back, and that loss will undoubtedly sting. If there's a silver lining to be found for the Cowboys here, at least he didn't end up signing within the division.

Quinn signed with the Bears for 5 years, $70 million. Jones and Quinn were two major pieces in the Dallas D, that the Cowboys are unlikely to be able to replace with equal or better players.

This one is addition by subtraction. Witten is cooked, and he was only getting in the way of Jarwin.

Heath was a liability at times for the Cowboys on the back end, as he was a horrendous tackler. Still, the Cowboys never found anyone better than him over the last three years, as Heath was a starter from 2017 to 2019.

During the 2016 NFL Draft, the Cowboys had their sights set on Carson Wentz, and then Paxton Lynch, and then Connor Cook, before eventually settling on Prescott, who, at best, was their fourth choice. They lucked out big-time when it turned out that Prescott could play a little at the NFL level. They had a huge advantage of paying their starting quarterback next to nothing for four years, and being able to allocate financial resources to beef up the rest of the roster.

Four years later, all the Cowboys have to show for it is one playoff win.

Compare the Cowboys' "players added" to their "players lost" in the chart above, and it isn't hard to see that their roster got worse this offseason, perhaps substantially so. This day was always going to come, whenever Prescott's cap number jumped from the 3,483,937 they paid him over four years, to the roughly $30.5 million he currently counts for on the franchise tag.

Seven starters are on their way out, and only two have been replaced by outside talent. Losing that many key players, combined with a new coaching staff, in what is going to be a shortened offseason as a result of the Coronavirus outbreak, cannot be a very settling feeling for Cowboys fans,