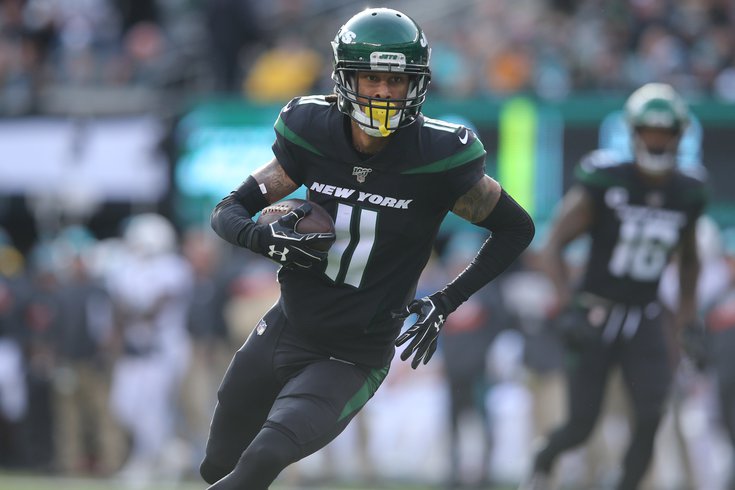 UPDATE [7:30 p.m.] — It's funny how things work. This morning, we took a look at five wide receiver options that made sense for the Eagles, who could use help at the position.

In less than one day, four are off the board. The two most recent signings happened this evening, with Devin Funchess inking with the Packers, and Breshad Perriman with the Jets.

Former Bucs’ WR Breshad Perriman is signing with the Jets on a one-year deal for worth up to $8 million, including $6 million guaranteed, per @RosenhausSports.

The #Packers are expected to sign WR Devin Funchess, per sources. A big body on the perimeter for Aaron Rodgers.

UPDATE [3:35 p.m.] — Two of the Eagles' potential wide receiver options are off the board.

This afternoon, Temple University continued it's reunion in Carolina, as they inked alum Robby Anderson to a two-year deal.

Former Jets’ WR Robby Anderson is signing a two-year, $20 million deal including $12 million in year one with the Carolina Panthers, per source.

Anderson joins former Temple quarterback Phillip Walker, who was signed out of the XFL on Monday, and first-year head coach Matt Rhule with the Panthers.

Phillip Dorsett is the other speedy wideout to find a new home. He signed with the Seahawks.

WR Phillip Dorsett just texted me he is going to the #Seahawks on a 1-year deal.

Yesterday, before linking you up with our NFL open thread and live stream, we took a brief look at the running backs still out there for the Eagles to sign.

Today it's the wide receivers.

The draft is fully loaded, and the Eagles will most assuredly take a wideout (or two) over the first two days of the draft. However, they still will probably need to add at least one veteran pass-catcher, perhaps more — especially if they cut ties with Alshon Jeffery, as they are expected to eventually do.

An Alshon-less receiving corps prior to the draft would pretty much be 33-year-old DeSean Jackson, last year's disappointing draftee JJ Arcega-Whiteside, undrafted free agent Greg Ward and a bunch of practice squad hopefuls.

Here's a look at the top five remaining receiving options that can be had at the right price:

Anderson is fast and reliable, catching 207 passes for 3,059 yards and 20 touchdowns over the last four seasons with the Jets. He is relatively young, and the longer he goes unsigned the cheaper his price could be. He is also Temple made.

A vastly different case than Anderson, Perriman has caught just 95 passes over the same span as Anderson. He was barely used for three seasons before coming on late last season in Tampa for 645 yards and six touchdown catches. Perhaps his low mileage and lack of production could give the Eagles a cheaper speed option.

Though just 25, it really feels like Funchess has been around forever. He's had one breakout year — an 840 yard, eight TD campaign with the Panthers two seasons ago — but injuries stifled his 2019 with the Colts. His youth and talent are certainly appealing.

Dorsett was a first-round pick the same year the Eagles picked Nelson Agholor, and he has not been nearly as productive, working as a third or fourth receiver for most of his career and exceeding 400 receiving yards just once in five seasons.

Allison was an undrafted free agent who showed glimpses of excellence with Aaron Rodgers over the last few seasons. He has never gotten a full workload at WR, with just 89 catches for an 11.7 yards per catch average over his career.

While we eagerly anticipate some kind of signing, sometime between now and whenever training camp opens (hopefully July), follow along below with out NFL free agency live stream and open thread: