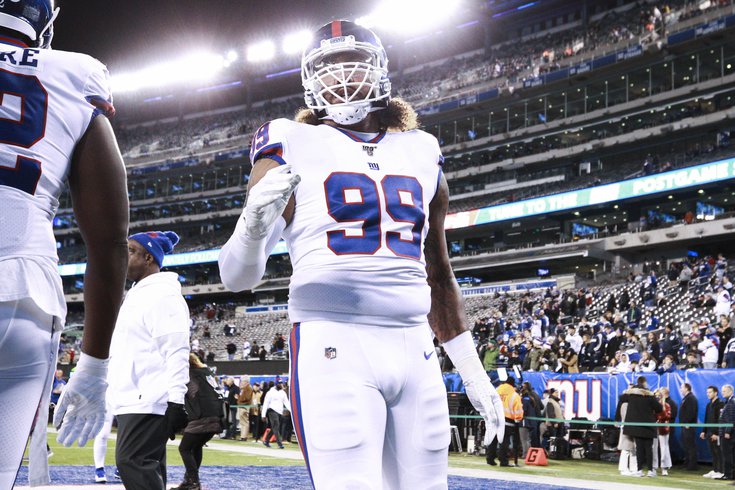 With their 2019 season already over, the Giants traded two draft picks for soon-to-be free agent Leonard Williams, and then franchise tagged him, lol.

Dave Gettleman is somehow only entering his third year as the New York Giants' general manager, though it feels like he's been there far longer than that. His 2018 and 2019 offseasons were objectively atrocious, and often comical.

Let's see what he and the Giants have done so far in 2020 free agency (you can look at our Cowboys breakdown right HERE).

After consecutive losses to the Cardinals and Lions in October, the Giants were 2-6, and their season was basically over. So what did Gettleman do? He traded a third-round pick (which is now the 68th overall pick) in 2020 and a fifth-round pick (that could become a fourth-round pick) in 2021 to the Jets for Williams, essentially for eight games. Lol.

They couldn't get a long-term deal done with Williams, and since the loss of a pair of draft picks for a team that went 4-12 the year before would have been wholly indefensible, they franchise tagged him.

Williams has been a disappointment as the sixth overall pick in the 2015 draft (17.5 career sacks in five years, 0.5 in 2019), but he's still a good interior defensive line starter. He is obviously not worth $16,126,000 for one year, and his agent should be thrilled to get the tag.

The Giants picked up Mayo after the Niners cut him after training camp. He had 82 tackles, two sacks in 2019. Good run defender, bad in coverage.

The former first round bust signed with the Giants in 2018, had five catches that season, and then tore an ACL during training camp in 2019.

Paying $14.5 million/year for Bradbury is pricey, but he's 26 years old (he'll turn 27 in August), and the Giants have a clean out after two years if he under-performs.

The Giants made the correct decision to get Janoris Jenkins off their roster after he used an offensive slur, and then stood by it. As a result, however, they were extremely light at corner, and absolutely had to address it in free agency. With the Eagles, Dolphins, and Raiders all bidding on Byron Jones, the Giants went hard after the next guy up after him, and got their man. If that was done purposefully, that's not a bad strategy. We'll give Gettleman a golf clap there.

And yet, he really isn't a very good tackler. According to pro-football-reference.com, Martinez missed 18 tackles last year, giving him a bad missed tackle percentage of 10.4 percent.

Racking up a lot of tackles doesn't move the needle in today's NFL. Remember the Eagles-Packers game last year, when the Eagles racked up 176 rushing yards and two TDs on 33 carries? Well, Martinez had 15 tackles in that game (the next closest Packer had 8), and I'll bet that nobody here remembers anything about him from that game.

What does matter in today's NFL is being able to cover, and Martinez struggles there. He is a player that maybe should have a lot appeal in 1980, not 2020.

Markus Golden's signing to a one-year "prove it" deal was a rare 2019 offseason move that made sense for the Giants, and he quietly had a productive 2019 season, racking up 72 tackles, 10 sacks, 13 tackles for loss, and 27 hits on the quarterback. In 2019, after hitting sack incentives, Golden made $4,750,000. Surprisingly, he remains unsigned. The guess here is that he's asking for more money than teams want to pay.

If the Giants are going from Golden to Fackrell, that is a substantial downgrade.

It's hard not to think of Gettleman's signing of an already cooked Jonathan Stewart a few years ago here. Lewis is coming off two down seasons in Tennessee, and he turns 30 in September.

Fleming has played in 75 games, with 26 starts, and never more than seven starts in one season. He could replace journeyman Mike Remmers at RT. If Fleming was added as depth only, then great. Good signing. If they view him as a starting RT, then a pairing of Nate Solder and Fleming would give the Giants one of the worst offensive tackle combos in the NFL.

Johnson is known more as a run stuffer, because of course he is. He'll be a backup behind Williams, Dalvin Tomlinson, and Dexter Lawrence. The Giants have almost no threats at all to get to the quarterback.

For a team that has seemingly found its franchise quarterback in Daniel Jones, but is still going nowhere in 2020, McCoy makes sense as a low-cost backup.

Toilolo is a 6'8, 270-pound blocking tight end with fewer than 1,000 receiving yards in seven seasons.

By far, Manning's retirement is the best thing that happened to the Giants this offseason. They should have moved on from Manning years ago, but because the Giants felt that they owed him some sort of insanely idiotic loyalty, they kept him and his massive cap hits around until he finally retired.

As noted above already, to be determined if the Giants have a better plan than Cameron Fleming to replace him.

Latimer was a second-round disappointment for the Broncos, but at least became a useful special teams guy and No. 4 receiver for the Giants the last two years.

The Giants entered 2020 free agency with a boatload of cap space, and a Swiss cheese roster. It shouldn't have been hard for them to get significantly better in free agency, and it's debatable whether they really did that or not, even after signing nine outside players.

The Giants absolutely had to sign a cornerback, and they did so in Bradberry. He'll certainly help.

But beyond that, they spent on a lot of "guys," none of whom have much in the way of projected upside. Is there anyone in the Giants' "players added" column above who hasn't already reached their ceiling, or is coming down from it? In my view, no.

For a team that has gone 12-36 the last three years, the focus should have been on adding young players with an upward trajectory, not paying for non-impact role players who just are what they are.