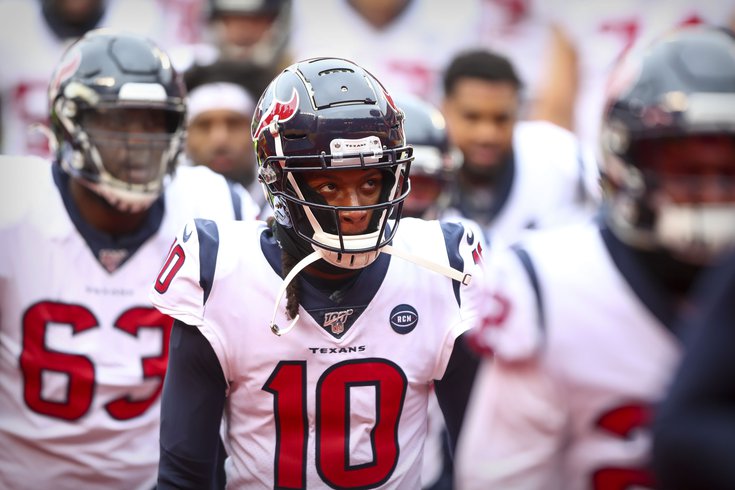 UPDATE [11:04 p.m.] — It appears you can take Amari Cooper off the board as an option for the Eagles, as it appears he's reached a monster deal with the Cowboys, who earlier on Monday placed the franchise tag on QB Dak Prescott.

The #Cowboys have reached an agreement in principle with WR Amari Cooper on a 5-year, $100M deal, source says. He never wanted to leave Dallas, and now he sticks around.

Eagles fans came into the day with high hopes that the team would land one of the big-name wideouts on the market. Instead, they've seen the opposite...

It's looking more and more likely that the Eagles will target a receiver early in the draft.

UPDATE [10:54 p.m.] — Another wide receiver goes off the board for the Eagles, as the Bills have traded for Stefon Diggs. It was first reported by Jay Glazer.

Bills have acquired @stefondiggs in a trade from the Vikings. @NFLonFOX

And, boy, did it cost them.

If nothing else, that goes to show you how badly the Texans got fleeced for DeAndre Hopkins, who only cost a 28-year-old David Johnson and a second-round pick. Sure, Diggs has four years left on his current contract, which is one more than Hopkins, but he also has $56.5 million left on that deal, while Hopkins is only owed just under $40 million and carries a smaller cap hit than Diggs.

Hopkins is also the better player. Either way, Diggs, who has killed the Eagles over the years, is no longer an option for Philly — he's also out of the NFC, which is nice.

UPDATE [3:01 p.m.] — Below we mentioned Stefon Diggs' recent string of cryptic tweets, but this one on Monday really got people's attention. Does this mean his time in Minnesota is over?

it’s time for a new beginning.

Stay tuned as the trades and signings continue to come flying in. You can get all the latest in our live updates post, here.

UPDATE [1:29 p.m.] — Well, that didn't take long. Shortly after posting the below story, the Cardinals and Texans completed a blockbuster trade involving DeAndre Hopkins, David Johnson and some draft picks. Take a look:

🏈Cardinals get DeAndre Hopkins and a late-round pick.

🏈Texans get David Johnson and a second-round pick.

Other picks involved, but Hopkins wanted a new deal that Arizona can provide.

Damn. While Hopkins may be off the board for the Eagles, they still should have some options if they don't want to wait until the draft to upgrade the position.

NFL free agency kicked off on Monday at noon, with the beginning of the legal tampering period — meaning teams are allowed to contact other teams' free agents — ahead of the official start of the new league year on Wednesday — meaning teams and players can officially agree to new contracts.

The landscape of the NFL will shift dramatically in the coming days, with some teams going on a free-agent frenzy while others will play the long game, wait for the cheaper free agents, and then add more in the draft.

Meanwhile, the Philadelphia Eagles, who have more than $40 million in cap space and 10 picks in April's draft, which is still expected to take place as scheduled, albeit without the crowds, are looking to accomplish both. The two main areas where they'll be looking to make improvements this offseason are at cornerback and wide receiver.

And while the draft promises to be full of top-end talent at the receiver position, the Eagles are also going to have some big-name options before then, both via free agency and trade. Let's take a look at the latest on some of the top players who could be available to the Birds...

This is not the name I was expecting to be leading off this story, but here we are. Hopkins is one of the best wide receivers in the entire NFL, so why on earth would Bill O'Brien and the Texans consider trading him?

Well, for starters, the Texans draft pick situation is pretty terrible and Hopkins would certainly command a big haul, especially considering he still has three years left on a very manageable contract and is on the right side of 30. The Texans could then look to the draft to try and land his replacement, assuming they get a 2020 first-round pick in return. Otherwise, they'd have to wait until late in the second round to make their first pick, and if there's a run on receivers before then, they could miss out on their chance to grab one of the top-tier guys.

It might be just pre-draft chatter, but two teams over the weekend told me to watch Houston and DeAndre Hopkins, who has three years and a reasonable $40 million left on his contract, and who’d cause only a $3-million cap hit to the Texans if they traded him. Houston is currently in draft hell, without a top-50 pick in 2020 and 2021, and coach Bill O’Brien has huge needs to fill on his offensive line, in the secondary and overall youth on the front seven; J.J. Watt and Whitney Mercilus will play this year at 31 and 30.

What could hurt O’Brien if he’s serious about moving Hopkins is he’ll play this year at 28, and he wasn’t as explosive last year as he’d been . . . and the fact that this is one of the best years in history for wideouts in the draft. How tempting Hopkins would be, though, to teams with cap money. The Patriots, at 23, would be a fascinating match (they might need a mid- or late-round pick back with Hopkins), or the Niners at 31, Giants at 36 or Dolphins at 39.

Houston’s need across the roster is big, and it’d take a big pick to pry Hopkins. Over the last three years, Hopkins has 15 more catches, 14 more touchdowns and 12 fewer dropped passes than the great Julio Jones. Pretty tempting to consider.  [nbcsports.com]

No, King doesn't mention the Eagles as one of the teams, but the Eagles have the money, and a better pick than any of those teams listed above. Of course, the big snag for Philly here is that they're already paying sizable contracts to both Alshon Jeffery and DeSean Jackson, and even if they're able to move Jeffery, he's likely still going to cost them a fair amount of cap space.

If that's the case, Howie Roseman and Co. might prefer addressing the receiver position in the draft. But if it comes to finding someone in free agency, they're going to be hard pressed finding someone at his talent level for such a reasonable price tag. For example...

One of the big stories on this busy NFL Monday was that the Cowboys decided to use the exclusive franchise tag on quarterback Dak Prescott. While that's important to the Eagles moving forward, it's the ripple effect from this deal that could impact them most in the short term: the potential availability of Amari Cooper.

BREAKING: The Cowboys have put the franchise tag on Dak Prescott & continue to work on a long-term deal with Amari Cooper.

While it's true that the Cowboys and Cooper are still working on a deal, they weren't able to get anything done before the legal tampering period opened at noon, and that could open the door for a team like the Eagles to swoop in and make him an offer he can't refuse.

Unfortunately for the Eagles, it's likely going to cost them quite a bit of their available cap space to get it done.

According to David Moore of The Dallas Morning News, there has been progress made in negotiations between Cooper and the Cowboys, but they have yet to reach a deal. Here's more from Moore's story prior to the team tagging Prescott.

Atlanta’s Julio Jones leads all players at his position with an average salary of $22 million. New Orleans receiver Michael Thomas is next at $19.2 million...

Cleveland’s Odell Beckham Jr. has the highest practical guarantee of any receiver at $65 million...

Does Cooper want a deal that averages more than Jones or gives him more guaranteed money than Beckham? There have been no rumblings that his expectations are to top the position in those categories as a prerequisite to sign...

Negotiations with the representatives for both players continued deep into the evening Sunday. The Cowboys, desperate to reach an agreement with at least one of the stars, will probably sweeten the deal that is closest to being done in the final hours in their quest to keep both off the free market.

That could put a little more in Cooper’s pocket.  [dallasnews.com]

The Eagles have been linked to Cooper throughout the offseason. Now it's time to see if they're willing to pay the price, especially if there's a player like Hopkins (whose cap hit over the next three years never exceeds $15 million/year) is available.

According to Mike Silver, speedy wideout Brandin Cooks could be available via trade after a disappointing 9-7 season for the Rams that saw them miss the playoffs entirely.

Brandin Cooks has been traded twice in his career (Saints to Patriots, Patriots to Rams), with a first-round pick included on each occasion. The 7th-year WR could be traded again this offseason, and it likely wouldn't take a 1.

With the Eagles already having a similar type of player in DeSean Jackson, Cooks might not make the most sense for the Birds, but if they don't trust Jackson to stay healthy, maybe an insurance policy isn't the worst idea.

Another player who has been linked to the Eagles, Diggs could be dealt this offseason. He's already scrubbed his social media of any references to the Vikings, and has been posting cryptic tweets in recent days...

“ I done been too solid, something gotta give “

This could mean absolutely nothing, of course. But, hey, it's the NFL offseason and these things are newsworthy this time of year.

One player who won't be available for the Eagles is Bengals wideout A.J. Green after the team placed the franchise tag on the veteran who missed all of last season with a foot injury.