One last look at the Eagles' players headed to free agency 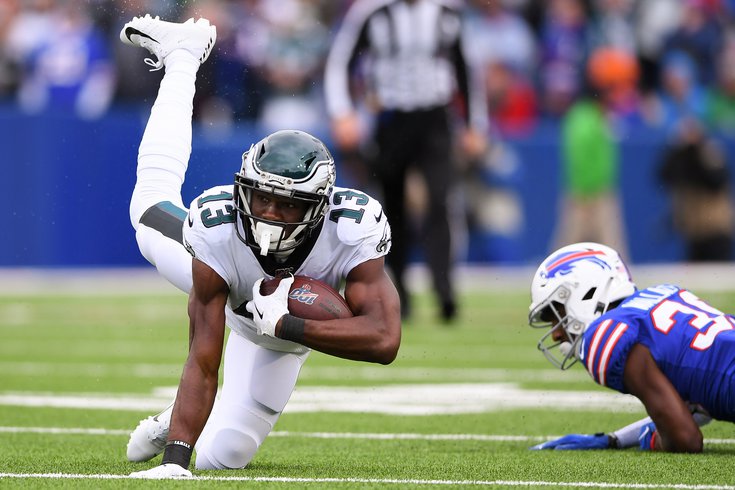 Nelson Agholor has very likely played his last game as a Philadelphia Eagle.

With NFL free agency (and the two-day "legal tampering" phase that precedes it) chugging along as scheduled, let's take one last look at the Philadelphia Eagles' free agents to be, as many players with Super Bowl rings will be finding new homes.

• LT Jason Peters: The logical thinking heading into this offseason was that the Eagles would let Peters walk in free agency to make room for Andre Dillard, a player they spent heavy resources on in the 2019 NFL Draft. But at the 2020 NFL Combine, Doug Pederson enthusiastically said he wanted Peters to return to the team. Later the Eagles and Peters "mutually agreed" that Peters will test the free agent market.

The guess here is that Peters will find an attractive deal from a contender in need of a short-term LT, and the Eagles will be priced out. The outcome will likely remain that Peters moves on, but the Eagles showed their hand that they aren't completely sold on Dillard as being ready to succeed Peters in 2020.

• WR Nelson Agholor: Agholor went from draft bust to key Super Bowl contributor, and back again. He can use a fresh start, and reports have linked Agholor to Frank Reich and the Colts.

• Swing OT Halapoulivaati Vaitai: Big V was an important player for the Eagles in his four-year tenure in Philly, filling in at various times at LT, RT, and RG, even starting in the Super Bowl, and saving the best performance of his life for the NFC Championship Game against Everson Griffen and the Minnesota Vikings. While it is perhaps a stretch to believe that Vaitai is an ideal starter either tackle spot, he is expected to see good money on the open market in an offensive line-starved league.

• RB Jordan Howard: The Eagles traded a sixth-round pick for Howard during the 2019 offseason, and he was a productive back before suffering some nerve damage in his shoulder after 10 games. The Eagles should look to bring Howard back at a modest price.

• RB Corey Clement: Clement is a restricted free agent, and the Eagles will need to tender him by 4:00 p.m. on Wednesday. The minimum tender is approximately $2.1 million. The bet here is that they pass on that opportunity, and Clement will be free to explore the open market, with the possibility of returning at a smaller number.

• QB Josh McCown: The "All or Nothing" star was forced to play in the playoffs against the Seahawks, which didn't go well, but McCown won praise far and wide in the Eagles' organization for his ability to connect with players. He has a coaching future in the NFL if he wants it, but if he returns to the Eagles in 2020, the bet here is that it will be much closer to the start of the 2020 season.

• QB Nate Sudfeld: Sud has been the No. 3 in Philly for 3 years now, and his best chance to move up to the No. 2 was last season, but a broken wrist in the preseason led to the Eagles' signing of McCown, who remained the No. 2 for the duration of the season. Will the Eagles look to Sud to be their No. 2 placeholder once again in 2020 in a similar way they did in 2019? My guess is yes, as some other high-priced backup quarterback will eat into financial resources that are better served to go other places on the roster. Look for Sud to come back at a modest price.

• CB Jalen Mills: I can't imagine anyone in the NFL liking Mills more than Jim Schwartz does, so the bet here is that Mills will return to the team as the CB2, a role that should suit him better than CB1, which will likely be filled by a big-ticket free agent (Byron Jones?).

• CB Ronald Darby: It cost the Eagles a third-round pick and Jordan Matthews to acquire Darbs before the 2017 season, and while he started on the Eagles' Super Bowl team, he was not very durable, and his bad 2019 season almost certainly punched his ticket out of Philly.

• S Rodney McLeod: McLeod had an under-the-radar bad season in 2019, perhaps partly due to a knee injury he suffered during the 2018 season, and the Eagles should be looking to upgrade from him with a safety with more speed and athleticism.

• LB Nigel Bradham: The Eagles already released Bradham, of course. They could monitor his situation and maybe look to bring him back at a very cheap deal if they are unable to adequately replace him in free agency.

• DT Timmy Jernigan: Jernigan will show flashes at times, but he goes long stretches without making plays, and he has not been durable enough to rely on going forward.

• LB Kamu Grugier-Hill: Kamu climbed the depth chart from fringe roster guy, to special teams standout, to No. 3 LB, to projected three-down linebacker in the Eagles defense, but a 2019 training camp knee injury derailed his momentum, and a frustrating 2019 ended with the Eagles and Kamu's agent releasing contradictory messages when the Eagles eventually placed him on IR. He's likely gone.

• DE Vinny Curry: Curry actually had a surprisingly productive season in 2019. While the Eagles would like to see one of their young defensive ends emerge as productive rotational guys, there will be temptation to bring Curry back, and it's not like Curry is likely to get some big deal elsewhere. I wouldn't rule out a return.

• DT Hassan Ridgeway: Ridgeway is still young and was a decent enough rotational player before he went on IR. I could see the Eagles having interest in bringing him back to compete for a roster spot at DT in 2020, but only at a cost near the veteran minimum.