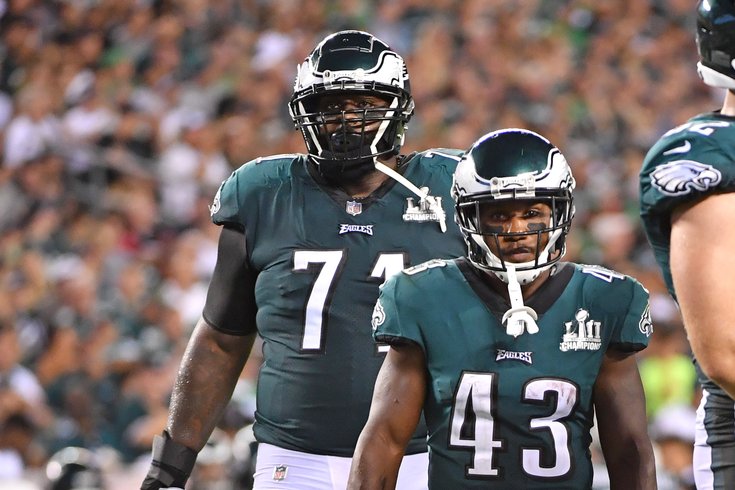 Jason Peters... the next Darren Sproles?

In the 2019 NFL Draft, the Philadelphia Eagles traded up three spots in the first round, from pick No. 25 to pick No. 22, costing them fourth- and sixth-round picks in the process, to select Jason Peters' eventual successor in Andre Dillard. It was a steep price to pay for a player who was only going to play as a rookie if Peters got hurt. Of course, the easy assumption to make was that Dillard would serve as Peters' understudy for a year, before becoming the full-time starter in 2020 and beyond.

Peters, now 38 years old, is scheduled to become an unrestricted free agent this offseason, and he would like to return to Philly for a 12th season as the Eagles' blindside bodyguard at left tackle. Asked if he wanted Peters to return in 2020, Doug Pederson responded, "Oh yeah. Yeah. I think I said the same thing about Darren Sproles."

Pederson did indeed say the same thing about Sproles last offseason at the NFL Owners Meetings. "I’d like to have him," he said. "I can’t speak for Darren obviously. This is his time to make his decisions, but I would love to have Darren back."

In 2017, Sproles simultaneously tore his ACL and broke his arm on the same play, costing him 13 regular season games, plus the Eagles' playoff run. In 2018, after going through rehab from that ACL tear, Sproles was "day-to-day" for about three months with a hamstring injury, missing 10 games. And when the Eagles kept Sproles against all logic in 2019, Sproles once again missed 10 games, plus a playoff game.

At the 2019 Owners' Meetings, Howie Roseman was little more tepid about Sproles.

"Everyone knows how we feel about Darren Sproles, again as a person and a player," Roseman said. "There are not many guys who have walked through this building who have higher character, better leadership ability, and have the chance to go to the Hall of Fame. So I think that everyone just needs time to get away and you kind of reconvene those conversations at the appropriate time, and that’s what we’ll do."

Roseman's comments on Peters on Tuesday in Indy mirrored his Sproles comments of a year ago.

"I think that as it pertains to all of our free agents, it's important that as we go through this process we keep an open mind with everyone, and try to figure out as we get more information," he said. "A big part of this week is accumulating information, and that's what we'll do here. Obviously, when we're talking about Jason Peters, we're talking about a Hall of Fame player, a Hall of Fame person, someone who is very special to us, and one who played a very high level last year."

It's probably important to note that keeping Sproles is a little different than keeping Peters, in that Sproles was never going to be anything more than a rotational player, while Peters would definitively keep Dillard off the field as long as he stays healthy. Right, Doug?

"Yeah, it is that simple... It's either JP, or it's Andre, and those are the decisions we have to make."

In other words, before you ask, no, Peters isn't moving inside to guard, nor is he returning to be a backup.

At his year-end press conference in January, Roseman stated that he felt that one of his biggest weaknesses is getting attached to players who have been in Philadelphia for a long time. On that front, moving on from Peters will be his biggest challenge this offseason. For those who don't have to be the messenger who tells Peters that he's no longer needed, it feels like a no-brainer to turn the reins over to Dillard.

...or maybe the Eagles just don't think Dillard is ready.