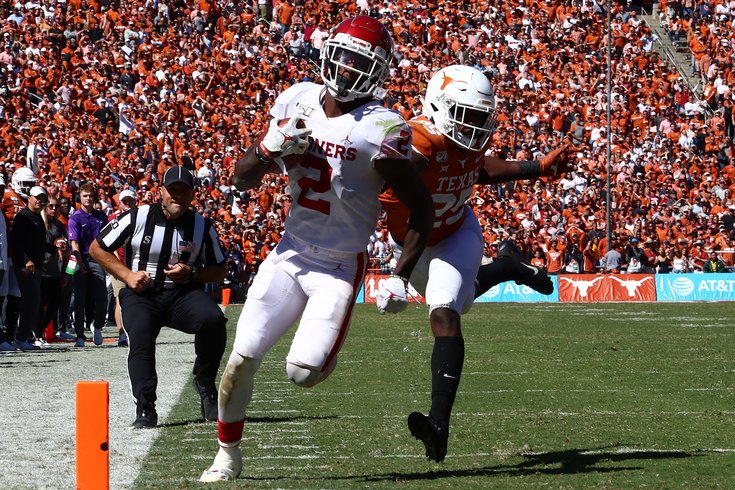 CeeDee Lamb is an awesome football player, and he has an elite name for puns.

The 2020 NFL Combine will kick off this week, and the obvious position of interest, both locally and nationally, will be at wide receiver. In Philadelphia, the wide receivers will be the primary focus because of the Eagles' obvious need for them. Nationally, this wide receiver class will draw heavy interest because it's being touted as one of the best and deepest groups ever.

Here we'll give a quick primer on each receiver of note. While we're sort of tiering these players, the following is not necessarily a ranking of them. I know that's sort of contradictory, but shut up. In other words, don't pay too much attention to the tiers for now, as I threw them together a little haphazardly. We'll rank them from 1 to TBD at some point after the Combine.

• CeeDee Lamb, Oklahoma: CeeDee Lamb is awesome. He has great hands, body control, he tracks the ball with ease, strength, YAC ability, toughness, slot-outside versatility, etc etc. If there's one small gripe, it's that he's not a burner, though certainly his speed is fine. He's probably going to be a top 10 pick.

• Henry Ruggs, Alabama: Ruggs would be something of a dream scenario for the Eagles, but he is expected to run a sub-4.3, and if he does, forget it. In addition to blazing speed, Ruggs has good hands, he makes contested catches, he'll get yards after the catch, and he'll get up and keep playing after taking hits.

• Jerry Jeudy, Alabama: Jeudy's small frame might make teams worry about his durability at the next level, but as a player, it's hard to nitpick his game. He has water bug-like quickness in small spaces, and great speed when given some room to run. He's also already an outstanding route runner who often makes opposing defensive backs look ridiculous, and he's a sure-handed receiver who doesn't drop many passes.

• Laviska Shenault, Colorado: I think Shenault is every bit as good as the top tier guys. He's a big, 6'2, 220 YAC machine, who reminds me of a more athletic JuJu Smith-Schuster. Unfortunately, he also comes with a long history of injuries.

• Brandon Aiyuk, Arizona State: Aiyuk is expected to run a fast 40. In addition to his speed, Aiyuk has outstanding YAC ability, and should also contribute as a returner early in his career.

• Tee Higgins, Clemson: Philly folk have come to know Higgins as the 50-50 guy that they don't want. Personally, I hate that description of him as a player, as I believe he's a lot more than that. The Combine will give Higgins an opportunity to show that he is quite athletic as well.

• Justin Jefferson, LSU: Jefferson catches everything, and will frustrate defenses at the next level by coming up with big third down catches for first downs. But beyond that, he can also work the intermediate to deeper parts of the field as well. He played both in the slot and on the outside at LSU.

• KJ Hamler, Penn State: Like Ruggs above, Hamler could run a sub-4.3 40. We'll see. He's a game breaking slot receiver, but has struggled with drops. Someone will take him in the second round.

• Denzel Mims, Baylor: Heading into the Senior Bowl, I viewed Mims as a little raw as a route runner, but a player with good size, a track background, and good production at Baylor over the last three seasons. At the Senior Bowl, he ran very good routes all week, and was a clear standout overall.

• Jalen Reagor, TCU: Reagor is speedy and powerful, but his production was hurt by sucky quarterback play. His 40 time will be of high interest.

• Van Jefferson, Florida: It's probably between Jefferson and Jeudy as far as which receiver runs the best routes in this class, which makes sense, seeing as Jefferson's dad is Shawn Jefferson, who played for 13 years in the NFL, and has been a wide receivers coach in the bigs for 12 years.

• Michael Pittman, USC: Pittman doesn't fit the burner profile that (I believe) the Eagles need. However, he's not a stiff athletically, and he is a vertical threat who made plenty of plays down the field at USC using his impressive size, hands, and physicality. I wanted to not like Pittman, but I kind of do.

• Devin Duvernay, Texas: Duvernay is a speed guy who works out of the slot and has good YAC ability. He has a chance to solidify Day 2 status with a strong Combine showing.

• Antonio Gibson, Memphis: Gibson is a versatile playmaker, working out of the slot, as a running back, and as a kick returner for Memphis. He is stoutly built, and he has some juice. He'll be a fun toy for a creative play caller.

• K.J. Hill, Ohio State: Hill is a shifty, smooth, competitive slot receiver prospect, with a natural feel for the game. Some have him pegged as a Day 2 guy.

• Donovan Peoples-Jones, Michigan: People-Jones was a big-time recruit coming out of high school, and maybe someone will overdraft him because of that, but I just don't see what others do in terms of what he did at Michigan. Some have him in their top 10 wide receivers. Huh? Why?

• Lynn Bowden, Kentucky: Bowden is a gifted athlete who transitioned from wide receiver to quarterback in Kentucky's sixth game this season, and led the Wildcats to a bowl game. He is a versatile player who can also return kicks, and the Eagles have been intrigued in the past by guys who played some QB in college, notably Trey Burton, Greg Ward, and Braxton Miller.

• Gabriel Davis, UCF: Davis was the go-to guy in UCF's offense. He has good size, decent enough deep speed, and he can win 50-50 balls, but there are concerns about his acceleration, agility, and his ability to stop and go. I'd view him as a poor man's DK Metcalf.

• Collin Johnson, Texas: Someone is going to take Johnson earlier than they should because he's 6'6 and has some contested catch ability, however, he's likely to run a slow 40 and he has batted soft tissue injuries.

• Bryan Edwards, South Carolina: Edwards is a nice all around receiver, but without another any obvious special trait that jumps out. He won't compete at the Combine as a result of a broken foot.

• Chase Claypool, Notre Dame: At 6'4, 230, Claypool is more like an Evan Engram-type than he is a traditional receiver. He was just OK at the Senior Bowl, in my opinion.

• James Proche, SMU: Proche will likely be a slot receiver in the NFL. He's a good athlete who gets yards after the catch, and he's obviously productive, as he broke all of SMU's major receiving records.

• Binjamin Victor, Ohio State: Victor is a tall receiver with downfield ability, who has at least 15 yards per catch in every year he has been at OSU.

• Marquez Callaway, Tennessee: Callaway is a speed receiver whose talents may have been wasted to some degree in Tennessee's offense. He did have a big yards per catch average (21.2), as well as a high career punt return average (13.6).

• John Hightower, Boise State: Hightower has speed, but he's also a beanpole at 6'2, 171, so there will be concerns about his ability to beat press coverage in the NFL.

• Joe Reed, Virginia: Reed lined up inside, outside, and in the backfield for Virginia, but his biggest appeal will be as a returner, where he was among the best in the country..

• Quintez Cephus, Wisconsin: Cephus will be a popular name on the pre-draft visit circuit, as he'll have to explain why he was accused of sexual assault in 2018 (he was acquitted, but missed an entire season as a result). On the field, he's a good possession receiver, but lacks the big play ability the Eagles should be coveting.

• Tyree Cleveland, Florida: Cleveland showed some speed at the Senior Bowl, but he was way behind his Florida teammate, Van Jefferson, as a route runner. He has a floor as a special teams guy.

• Antonio Gandy-Golden, Liberty: Gandy-Golden was up and down at the Senior Bowl, but he has good size, and finished fourth in the nation with 1,396 receiving yards.

• Omar Bayless, Arkansas State: Contested catch guy with good size who has a flair for the spectacular catch who finished second in the nation with 1,653 receiving yards. Probably won't run a fast 40.

• Kalija Lipscomb, Vanderbilt: I had Lipscomb earmarked as a guy I wanted to profile this year, but he had a disappointing senior season, followed by an unimpressive Senior Bowl. He has inside-outside versatility, and some believe he'll be productive in the pros. I don't see it.

• Juwan Johnson, Oregon: Big, skilled Glassboro High School product who disappointed overall at Penn State, before transferring to Oregon. I can see him being a priority undrafted free agent by the Eagles if he doesn't get picked.

• Quartney Davis, Texas A&M: Davis is a slot guy with decent size. He did not impress at the Senior Bowl.

• Jeff Thomas, Miami: Thomas has off-the-filed concerns, but he's a speed demon from the slot, and a good kick/punt returner. He's sort of a forgotten guy who can help himself this week if he can run a blazing 40.

Others competing at the Combine that (hell, I'll just be honest) I don't know a whole lot about