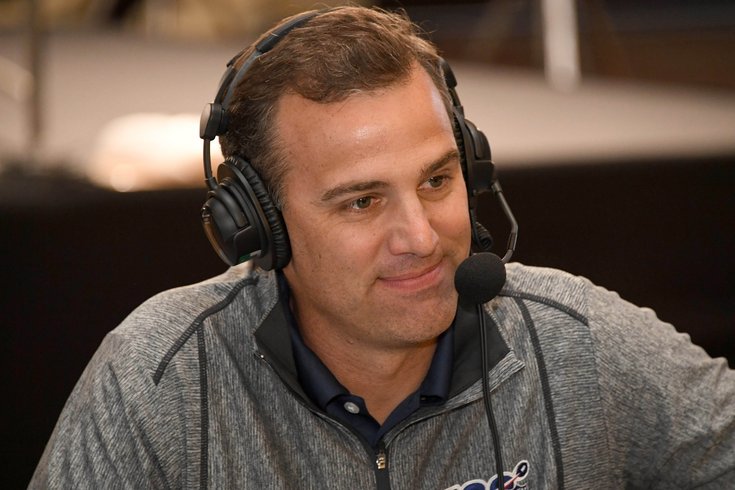 On Friday, NFL Network analyst Daniel Jeremiah held a conference call previewing the 2020 NFL Scouting Combine. In case you're unaware, Jeremiah was a former scout of the Philadelphia Eagles once upon a time, and the Eagles were even once interested in hiring Jeremiah to the position that was eventually taken by Joe Douglas.

Because of his contacts within the Eagles' organization, Jeremiah is probably as in-tune with the way the Eagles think as any national draft expert. During Jeremiah's conference call, three questions from Eagles reporters got in, you know, because we're so good at winning question face-offs.

They were good questions (and good answers) about the wide receiver and cornerback positions.

Q. You mentioned the wide receiver class and how impressive it is. The Eagles are obviously in the market for one, you would think this year. When you look at the area they're picking, the low 20s there, 21, which players do you anticipate will be available? And which of those guys kind of fits what they do and would make the most sense?

Jeremiah: Well, they could use all different styles of receivers, when you talk about getting a Z or an X slot. Like, I think they would prefer to have the speed, which is Jerry Jeudy. I don't anticipate that. Not Jerry Jeudy, Henry Ruggs. Jeudy will be long gone. I assume that Henry Ruggs will be long gone as well. But that to me, if you were to say home run pick for the Eagles, who is it, it's Henry Ruggs, just because of how much speed and juice he would give to that offense.

But I think Justin Jefferson has got a chance to be a high, high volume slot receiver a lot like Keenan Allen, can fill that role, can work in traffic. He's really good down in the red zone. He he led this entire draft class with touchdowns down in the red zone this year at 12. So, he's a point producer and he would be a great fit for them.

I love Brandon Aiyuk from Arizona State. I think he's a stud. He's tough, competitive, run-after-catch guy. Needs a little polish, but can return as well. So has some value there.

And you get into Tee Higgins, who I think will probably be there, who is really tall, long and rangy. You hope you're drafting A.J. Green. I don't think he's on that level but that's the style with which he plays. There's a little bit of concern with him just getting off press. Some of the better competition they played later in the year he struggled a little bit with that. I would say that group of wide receivers is probably be the ones they'll be staring at.

Q. You brought up the Eagles needing a wide receiver earlier in the first round. But they also need help at cornerback. Who are a couple of guys that you would peg on maybe day two to kind of address the cornerback need or the safety needs that they have?

Jeremiah: It's a good group. When you start getting to day two, look, you've got a guy like A.J. Terrell from Clemson, who's real tall, lean, real fluid. He's somebody that plays a variety of techniques there. A really good blitzer coming off the boundary too, which would be fun for Jim Schwartz to play with a little bit. But he can be a little sticky when he has to work back downhill. But he's a tall, long, athletic corner. I think he's a late 1, early 2, could end up slipping a little bit in the second round, see what happens.

Damon Arnette, I love Damon Arnette. He's twitched up from Ohio State. He can find and play the ball. He's a little bit tight, but you can play him in press. He's somebody, I think, is going to go in the second round.

Jeff Gladney from TCU, kind of he's got some similarities to a Denzel Ward. Just undersized, real feisty. He plays off. He's real fluid, very aware. I've watched the Iowa State game, one of the games I flipped on with him, it was a war watching him go up against that wide receiver. He's another one in that range.

The one that I think is going to go in the second round that's fascinating to me is the corner from Auburn, Noah Igbinoghene. I'm going to get that name right when we get to the Combine. I'm sure I just butchered it. But he's one that's really explosive. A former wide receiver. He was a track guy. They moved him to corner. Really, really ultra twitched up. But he struggles to play the football. And that to me is my concern. He doesn't have any interceptions. He's always in phase, in the right position. And especially in the LSU and Alabama games, he just struggled to find and play the ball. So I think he'll get drafted in the second round based off traits, but there's still some development to take place there.

And another name I would just throw in the mix would be Trevon Diggs. We'll see what happens with Diggs from Alabama who has got some Aqib Talib-type skills. But the question is just pure deep speed. But real fluid. Obviously Stefon's brother there, the wide receiver with the Vikings. Former wide receiver, kickoff returner. Really skilled athlete. The question is just how is his deep speed and he's just okay as a tackler. It's a good group. If you want to take a corner in the second round, that's the list of names you would be choosing from. And I think there's a lot of good players in that group.

Q. My question is Eagles related. Someone asked earlier about like defensive backs in the second round. I guess my question is like how do you balance the fact that obviously they need a wide receiver and a defensive back with maybe thinking there might be more depth at wide receiver in the second round? Like, if you're Howie Roseman how do you go about figuring all that out?

Jeremiah: I think first of all we've got to look at free agency, we'll see. If they end up making a move in free agency at one of those positions, then that could free up. I think when you look at the free agent group, I think it would be more likely to get a corner in free agency which would really free them up to take big-time impact receiver in the first round. So that to me will go a long way in figuring out what the heck they're going to do with their first-round pick.

I think there's a good pool of -- there's a great pool of receivers to choose from outside the first round. And I think even corner-wise, going through that list of names we went through a little earlier, there's guys that will come in and start and help the team right away. I think it's a situation you're true to your board, who do you have the higher grade on. I don't think you have to play the supply-and-demand game if you're the Eagles because those two positions I think you'll be happy with what you get in both rounds. Just take the higher-rated player in the first round.