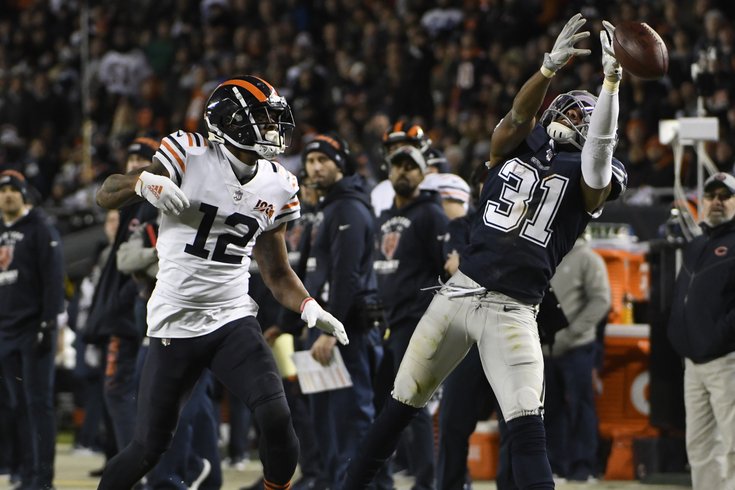 In our Eagles chat on Thursday, there were a lot of questions that we could not get to in time or other questions we did answer but could use more color. And so, let's do a mailbag post to answer some of the overflow.

Question from Hinkie: I understand that the Eagles desperately need help at corner, but I really think Byron Jones would be a mistake. His lack of splash plays is alarming, and he's hardly a shut down corner. He's good obviously, but if he's not producing turnovers and he's not taking away half the field why is he worth top CB money? IMO he's not and any team paying him as the top CB in the NFL is going to regret it.

I think that’s a reasonable concern, and certainly he’s going to be paid more than he’s worth, as are other corners in free agency. The Eagles, however, don’t have a choice, in my view, as they’re going to have to overpay for someone. The alternative is to field another secondary that gets roasted every week.

Ideally, they’d have hit on Sidney Jones or Rasul Douglas. They whiffed on both. The punishment a few years later comes in the form of having to overpay in free agency.

Question from Sporran: Would you rather the Eagles be relying on rookie WRs or rookie CBs heading into next season?

Neither, but given the choice between the two, I think that wide receivers have a better chance to succeed early than corners do.

Question from Michael: With all the talk of the Eagles needing a big-time WR, when was the last time a top 10 caliber WR won the Super Bowl? Julien Edelman is the closest I can think of in the last 10 yrs. Maybe you can say Tyreek Hill this year?

I would first say that the Chiefs are an excellent example of the importance of wide receivers in today’s NFL. Obviously, Patrick Mahomes is probably the best player on the planet, but those receivers (and Travis Kelce, who has wide receiver skills) had a lot to do with their Super Bowl run. Conversely, the Eagles' offense, without wide receivers last year, was pretty difficult to watch.

As a general statement, I don’t like going down the list of recent Super Bowl winners, and trying to be exactly like them, in terms of building a roster, especially currently, since the Patri*ts win every other year.

I think the Eagles have their positional priorities in the right place, in that they value quarterback above all else, then both sides of the line, then wide receiver and cornerback, and then the rest.

Question from Bob: Will Doug give more preseason snaps to the starters this year after the disjointed, lack-of-chemistry start to the season that they experienced last year? Should we revisit this topic in 7 months?

Yeah, that’s definitely a better question for July or August, but I didn’t really see it that way. They were a little sluggish in the first half of that first game, but then they exploded in the second half, and ended up with 32 points. In Week 2, if you’ll recall, they lost DeSean Jackson, Alshon Jeffery, and Dallas Goedert in that game, like immediately. I wouldn’t put that on a lack of preseason game reps.

Question from Jeffrey: Wouldn’t it make better long term sense not to sign any free agents. They’d have more comp picks next year and could roll cap space into next year.

My apologies for creating this comp pick monster, ha. But no, the Eagles are contenders heading into 2020. They are going to try to improve their roster this offseason with the hope of competing for a Super Bowl.

Last offseason, the Eagles were in line to collect on decent comp picks, like a 3 for Nick Foles, and a couple of 4’s for losing Jordan Hicks and Golden Tate. Because of that, and because they didn’t have a ton of cap space to work with anyway, it made sense to preserve those comp picks. This year, they have more roster needs, and they might not even have an outgoing free agent who qualifies for anything more than a 5. I wouldn’t be punting on free agency for that.

Question from David: Has it been determined what exact position our compensatory picks at the end of the 3rd and 4th rounds are?

Question from Alex: Lane Johnson just guaranteed a sweep of the Cowboys next year.

I heard he was going to be on that show, so I actually caught that live. Honestly, I didn’t think anything of it. He should exude confidence about beating them.

Question from STH: If the NFL moves to 17 games, the common-sense thing is 8 home, 8 away, 1 neutral. But if they also move to a 3 game preseason, what does that mean for season ticket holders who get stuck with preseason tickets? 1 home, 1 away, and… 1 neutral? Does each team alternate every year between having 2 home, then 1 home? Predictions if it happens?

Neutral field games aren’t common-sense, in my view. That’s lost revenue, and presents difficulties both in scheduling and logistics.

The guess here is that one year, all the AFC teams have the extra home game (with the NFC teams getting the extra preseason game), and vice-versa the next year. That way you’re not messing up competitive advantages, and each team can continue to maximize revenue.